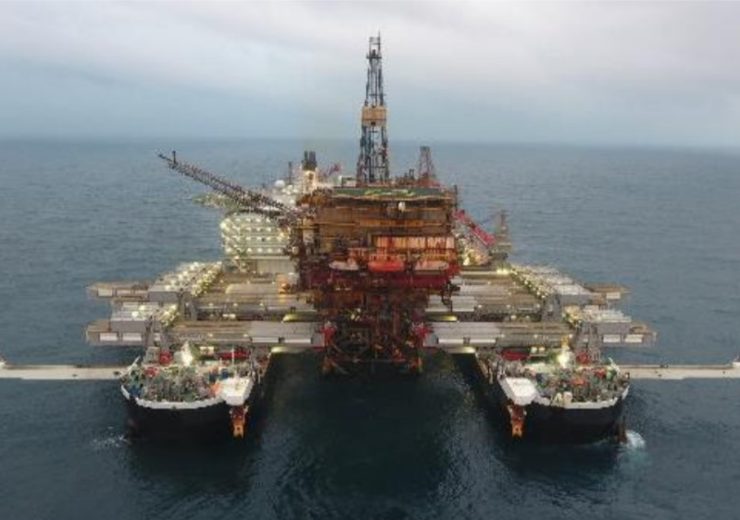 Ready for lift off – fast-lift of the Brent Alpha topsides. (Credit: Allseas)

Swiss-based offshore contractor Allseas announced that its heavy lift vessel Pioneering Spirit has completed the removal of third platform from the Brent oil and gas field in North Sea.

The vessel has completed the single-lift removal of Shell UK’s Brent Alpha platform, located 186km off the northeast coast of the Shetland Islands.

According to Allseas, the removal involved several years of planning and 15 months of offshore preparation, including strengthening and cutting the steel jacket’s six legs.

The preparations resulted in the 9-second “fast lift” of the 17,000-t topsides on 21 June, the company said.

The 44-year old structure will now be delivered by Pioneering Spirit to Able UK’s Teesside decommissioning yard in North East England for dismantling and recycling.

After Delta and Bravo, Brent Alpha is the third of four platforms to be decommissioned and removed from the Brent field.

The Brent Alpha platform consisted of a topsides structure supported by a steel six-legged jacket standing in 140 m of water.

Like the other two platforms that were already decommissioned, the Alpha topsides features multiple decks with living quarters, power generation, process systems, drilling derrick, flare stack and other platform facilities.

Pioneering Spirit was chosen by Shell UK for all the decommissioning of all the four platforms.

The vessel will also handle the removal of the fourth platform Brent Charlie when it finally ceases production.

In April, Allseas secured an order from Aker BP for the removal and disposal of multiple installations in the Valhall area in the North Sea.