The redevelopment project involved the installation of the Hod B wellhead platform, which is usually unmanned and is operated remotely from the Valhall field centre; the Hod field is expected to produce 40 million barrels of oil 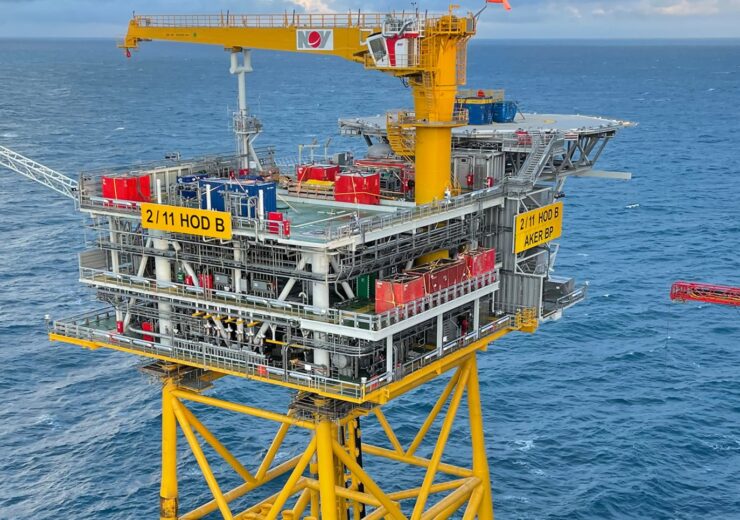 The Hod B platform in the Norwegian North Sea. (Credit: Aker BP)

Aker BP and its partner Pandion Energy have started production from the Hod B platform as part of the NOK5.7bn ($650m) Hod redevelopment project in the Norwegian North Sea.

The Hod B wellhead platform is normally unmanned and is operated remotely from the Valhall field centre. It will have 12 well slots.

Prior to achieving production from the redeveloped project, Subsea7 had undertaken multiple subsea campaigns. These include installation and connection of the gas lift pipelines, umbilicals, and production flowlines.

Six production wells that are part of the project were drilled by the Maersk Invincible jack up rig, while modification work was performed at the Valhall field centre.

The Hod redevelopment project was approved by Norway’s Ministry of Petroleum and Energy in December 2020.

The Hod field had started production in 1990, which lasted till 2013. The original platform had been shut down and is to be removed after the wells are permanently plugged.

Hod B’s first steel was cut in Aker Solutions’ Verdal yard in Norway. This was a day after temporary changes were adopted in the petroleum tax regime by the Norwegian Parliament in June 2020.

Aker BP CEO Karl Johnny Hersvik said: “Production start-up from Hod B less than two years after, is great news! It demonstrates how the temporary tax changes, matured in the spring of 2020 when the industry was paralyzed by a pandemic and a sharp fall in oil prices, has had a real impact.

“Aker BP and Pandion Energy responded immediately to the politicians’ expectation of creating activity for the supplier industry across the country.”

As the power needed for operating the Hod field will be drawn from the shore through the Valhall field centre, the production will have close to zero CO2 emissions.

Aker BP, which is the operator of the field, and Pandion Energy anticipate the Hod field to produce 40 million barrels of oil.

Pandion Energy CEO Jan Christian Ellefsen said: “This is an important milestone in revitalising the Valhall area and will increase our production on the NCS further. For Pandion Energy, this also marks the successful development of our third PDO, all with a clear environmental profile being powered from shore with ultra-low CO2 emissions.”

Aker BP has a 90% stake in the offshore Norwegian field, while Pandion Energy hods the remaining 10%.