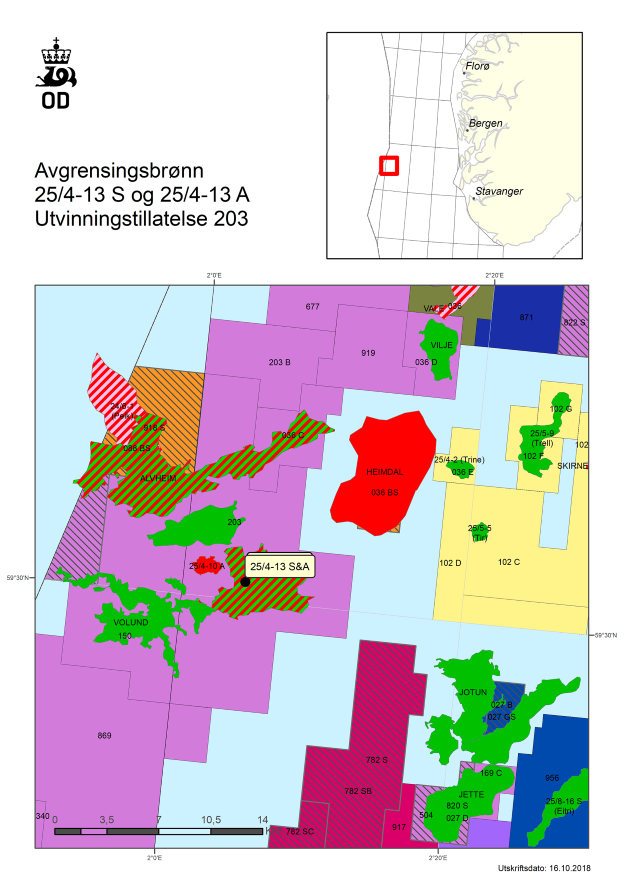 The wells were drilled about 5 kilometres east of the Volund field and 200 kilometres northwest of Stavanger.

The discovery was proven in Paleocene reservoir rocks (Heimdal formation) in 1974. Prior to the drilling of wells 25/4-13 S and 25/4-13 A, the operator’s resource estimate for the discovery was 4.9 million standard cubic metres (Sm3) of recoverable oil equivalents.

The objective of the wells was to prove a possible thicker oil column in the Heimdal formation than previously proven in wells 25/4-3 (Gekko) and 25/4-8, as well as to acquire more information about the complexity of the reservoir.

Well 25/4-13 S south on the structure encountered a 43-metre oil and gas column in the Heimdal formation, of which 6.5-metres was oil column. Nearly the entire interval consists of reservoir sandstones with very good to excellent reservoir quality.

The gas/oil contact and the oil/water contact were encountered at 2100 metres and 2106.5 metres total respective vertical depths below sea level.

Well 25/4-13 A north on the structure encountered an approximate 30-metre oil and gas column in the Heimdal formation, of which 6 metres was oil column. About 15 metres is net reservoir sandstone with very good to excellent reservoir quality. The thickness of the oil zone is somewhat uncertain due to reservoir quality variations.

The wells were not formation-tested, but extensive data acquisition and sampling have been carried out.

These are the 14th and 15th exploration wells in production licence 203, which was awarded in 1996.

The wells were terminated in the Paleocene (Heimdal formation). Water depth at the site is 120 metres. The wells have been permanently plugged and abandoned.

The wells were drilled by the Deep Sea Stavanger drilling facility, which will now leave the Norwegian shelf, on assignment for Total.