In less than a decade, Kenya has successfully made strides in its energy sector, particularly in renewable energy, with the support from the African Development Bank (AfDB) for the establishment of Turkana Wind Farm and Menengai Geothermal Power Station. 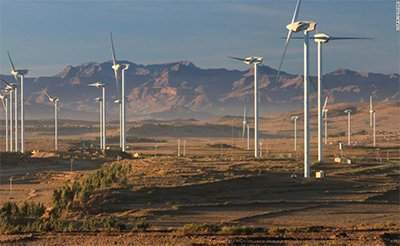 The figures speak for themselves – the nationwide electrification rate in Kenya has leapt from 28% in 2013 to more than 60% in 2017, according to data provided by President Uhuru Kenyatta at an energy round table held in January 2018. The government’s next goal is to increase the electrification rate to 80% by 2020.

Two years to the target date, Kenya is on track and making great strides despite the severe drought it has experienced and an increase in demand of 11% per year. This progress is due to Lake Turkana Wind Farm and Menengai Geothermal Power Station.

These two projects have benefited from funding from the African Development Bank, which has also worked closely with the Kenyan Government and development partners such as the French Agency for Development and the European Investment Bank, to ensure the diversification of Kenya’s energy supply, with a focus on clean, reliable and low-cost energy sources. They have also worked to strengthen the national distribution grid by increasing renewable energy installed power by some 10%.

The result of this is that the load shedding and other untimely power cuts of the past are now much less frequent. In addition, the government reduced the retail price of electricity by 8% in July 2018.

Lake Turkana Wind Farm project, located in the biggest lake in a desert setting in the world, took 15 years to build. Named the ‘African Renewables Deal of the Year’, in 2014 by Thomson Reuters, this wind farm is now the largest in Africa. It has hundreds of wind turbines whose blades turn in winds of up to 11 metres per second, about 25 miles per hour. Located in the north-west of Kenya, it has a power output of 300 megawatts.

The Bank served as lead arranger for 436 million euros in senior credit facilities towards the project cost of €623m. The Bank also provided a partial risk guarantee from the African Development Fund (ADF) of €20m, for the part of the project devoted to the transmission line.

The second major project, Menengai Geothermal Power Station, located some 180 km northwest of Nairobi, is another example of Kenya’s geothermal potential. With an estimated output of about 10GW, it supplies 500,000 homes (including 70,000 in rural areas) and 300,000 businesses. Naturally, the plant benefits from its exceptional geographical location on the iconic Rift Valley, which runs for more than 6000 km through the country and into southern Africa.

As a result of the two projects, Kenya’s foremost energy source in the last two years has been geothermal. As of this year, Menengai is the largest geothermal energy producer on the African continent and the ninth biggest worldwide. Since they became operational, both Turkana and Menengai have run at full capacity.

Once again, Bank financing was central to Menengai’s construction o-funded by the Bank – €96.5m – the Climate Investment Funds hosted by the African Development Bank Group (€19.3m). Other partners included the French Agency for Development, (€55.5m), the European Investment Bank (€29m) and the Government of Kenya (€190m).

In March this year, the government began a project to increase the capacity of Menengai Geothermal Power Station and at the same time decided to invest more in solar energy.

In June this year, Kenya awarded a 20-year contract for the purchase of 40MW annually from private electricity production company, Kenergy Renewables. The power plant, estimated to cost $60-70m, will be located in Laikipia, in northern Kenya, and will serve some 50,000 households. This represents another important step in the march towards universal access to electricity in Kenya.