The Abu Dhabi National Oil Company (ADNOC) has awarded a stake of 4% in an Abu Dhabi onshore concession to North Petroleum International, a subsidiary of China ZhenHua Oil. 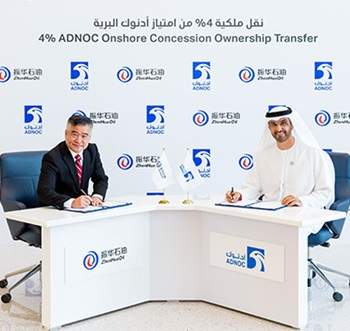 The stake in the onshore block was previously owned by CEFC China Energy, said ADNOC. The UAE state-owned company is the operator of the block with a stake of 60%.

Abu Dhabi’s Supreme Petroleum Council has given its approval to the ownership change which is said to align with the UAE leadership’s directives to open the emirate’s oil and gas concessions for partners who provide technology, operational experience, capital or market access.

“With China ZhenHua Oil, we will pursue mutually beneficial cooperation, share business growth opportunities and work together as we deliver on our 2030 smart growth strategy.”

“China ZhenHua Oil, as a new partner in UAE’s upstream sector, is honored to join the operating concession and will contribute its capabilities in technology, management and supply chains, which may maximize the benefits and value for all.”

The Chinese firm has operations across 11 oil and gas upstream projects in six countries, with gross production of nearly 10 million metric tons a year.

The company is also engaged in the fuel storage, transportation and refining business, with a trading desk located in Singapore.

China ZhenHua Oil is indirectly owned 100% by the Assets Supervision and Administration Commission of the State Council, a Chinese-government agency that handles over a hundred state-owned assets and enterprises across various sectors like oil and petrochemicals, telecommunications, and transport.