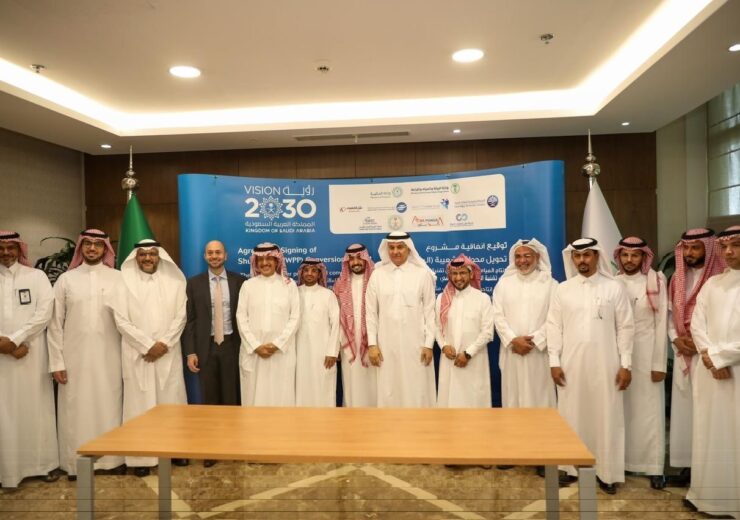 Under the agreement, the Shuaibah 3 IWPP from an energy-intensive power generation and desalination facility will be converted to a greenfield seawater reverse osmosis (SWRO) desalination plant.

In addition to restructuring, SWPC has signed a 25-year water purchase agreement for the new Shuaibah 3 IWP, which is valued at around SAR3bn ($800m).

SWPC has signed the agreement with a consortium led by ACWA Power and Public Investment Fund (PIF)-owned Badeel, who will lead the SWRO project implementation.

Upon completion of the project, Shuaibah 3 IWP is expected to produce 600,000 cubic metres of water per day.

The project will address the water demand of Jeddah and Makkah al-Mukarramah, especially during the Ramadan month and the Hajj seasons, said ACWA Power.

“This is the first project in which a thermal water desalination plant is converted into a greenfield reverse osmosis facility that utilises renewable energy to save up to 70% of energy consumption.”

Considered to be one of the largest desalination projects in the kingdom, Shuaibah 3 IWP will use advanced reverse osmosis technologies to ensure a high level of production.

The project will be designed to produce potable water with low power consumption and be partially energised by photovoltaic solar energy.

The approach would reduce electricity consumption from the grid by 45% and minimise the carbon footprint, to ensure the best environmental and sustainability practices.

ACWA Power said that the transition from thermal to RO will reduce the power required to desalinate seawater by 70%.

Also, the project will utilise 40% local content during the construction phase, 50% in the operation and maintenance phase for the first five years, and will increase up to 70%.

Shuaibah 3 IWP will become commercially operational by the second quarter of 2025, and the returns of the contracted revenues will be reflected during the same period.