Spanish company Acciona has signed an agreement with Saline Water Conversion Corporation (SWCC), a government organisation for the construction of more than €200m desalination plant in Saudi Arabia. 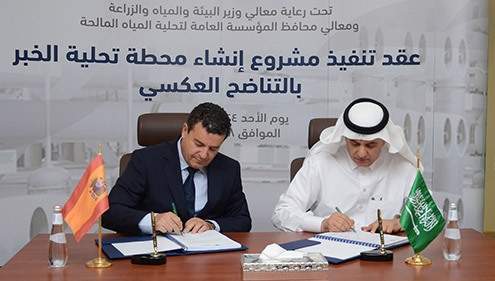 Image: Officials of SWCC and Acciona at the signing in ceremony. Photo: Courtesy of Acciona.

The Al Khobar desalination plant will be constructed in Khobar, which is about 400 kilometres from Riyadh.

This is an engineering, procurement and construction (EPC) contract along with a one-year warranty and is considered to be SWCC’s first Design & Build project with a Spanish company.

The desalination facility is expected to be completed in two years and will have a capacity of 210,000 m³ per day, which makes it one of the largest in Saudi Arabia. Water from the plant will also be supplied to Aramco, world’s largest oil company.

Acciona Agua has experience in water treatment business in Saudi Arabia since 2012 and it was awarded the contract to design, build and commission the Al Jubail RO4 seawater desalination plant for Marafiq along with SBG-PCMC. This facility serves both the city and the industrial complex in the country’s Eastern Province, on the Arab Sea coast.

Acciona Agua Middle East business development head Julio de la Rosa said: “I think ACCIONA Agua was selected as the most favourable contractor by SWCC  because of the highly efficient design, which enabled us to offer not only a very  competitive price for EPC but to optimize the OPEX and  the Specific Power Consumption, not to mention our proven track record worldwide and in the GCC.

“This Project will be our sixth seawater reverse osmosis desalination plant in the Gulf. Working with SWCC is a major leap for ACCIONA Agua since SWCC is the largest desalination company in the world. In the future, we expect to offer our high-end solutions to SWCC and to other clients in the region,”