Snowy 2.0 is a major expansion of the Snowy Mountains scheme, with preparations being made to allow first tunnelling to begin in December 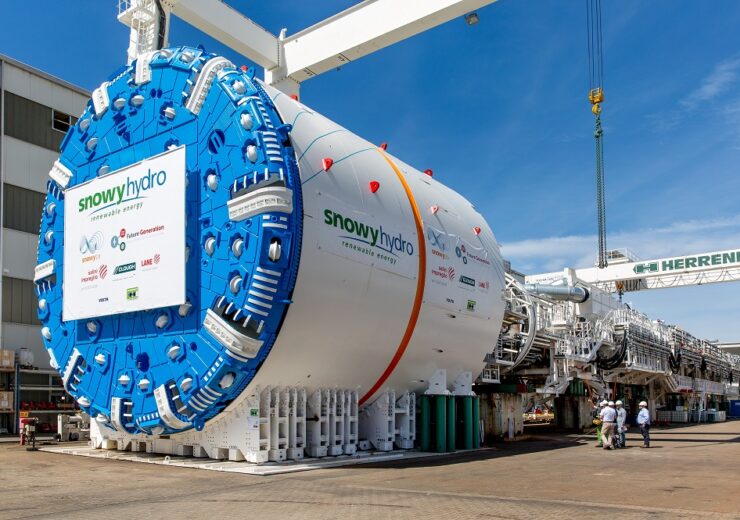 Construction of Snowy 2.0, a major pumped-hydro expansion of Australia’s renowned Snowy Mountains Scheme, is well underway, with tunnelling about to begin.

It will link two existing Snowy Scheme reservoirs, Tantangara and Talbingo, through 27km of segmentally-lined waterway tunnels, approximately 10m in diameter, and a power station about 800m underground.

Snowy 2.0 will add 2,000 megawatts (MW) of energy generation and, with the capacity to generate power for seven days without recharge pumping, it will provide 350,000 megawatt hours (MWh) of energy storage.

With renewable energy sources such as solar and wind power increasing in the energy market, the Snowy 2.0 pumped storage project is pivotal to Australia’s economy and energy transition to a low-emissions future.

Subcontractor Voith Hydro will deliver the latest hydro-generation technology in the power station.

Progress to-date at the Snowy 2.0 project

Early works for Snowy 2.0 started in May 2019 at the main Lobs Hole construction site, with progress made on access-road upgrades, creation of several new on-site roads, building of two permanent bridges over waterways and establishment of site compounds and supporting services including a construction power substation.

Major earthworks were carried out for the main access tunnel (MAT) portal and in recent months, a tunnel boring machine (TBM) cradle was built.

It is here that tunnelling for Snowy 2.0 is anticipated to begin in late December. The 142m-long, 11m diameter China Railway Engineering Equipment Group (CREG) machine is initially scheduled to bore the MAT into the power station complex.

An accommodation camp for 300 workers is well underway, and 66 workers are already living on-site. A water treatment plant is being constructed at the MAT portal that will treat water used by the TBM so it can be recycled.

In addition, the Snowy 2.0 concrete segment factory is on track for operation in December. Located in the Snowy Mountains town of Cooma, the specially-constructed factory will produce the 130,500 precast segments needed to line the waterway tunnels.

The majority of the tunnels on Snowy 2.0 will be constructed by TBM, involving a precast segmental lining support system (with segments produced locally, as per above).

The remainder of the underground works, including the access tunnels, adits, shafts and power station complex, will be constructed with drill and blast methods.

Future Generation has procured three single shield TBMs for the construction of the Snowy 2.0 underground works, including two open mode and one dual mode machines.

The TBMs will each have a nominal excavation diameter of 11m, and be compatible with a common concrete segment geometry. Whilst relatively similar in this regard, the challenges faced by each TBM differ substantially due to the respective tunnel arrangements, construction strategies and anticipated ground conditions.

A brief description of each of the machines is provided as follows:

The first TBM due to commence operation has been supplied by CREG and will bore the 2.7km MAT.

At the completion of this drive, the machine will be dismantled and reassembled near the downstream reservoir to bore the 6km tailrace tunnel back towards the power station complex.

The challenges faced by this machine are mainly associated with the anticipated ground conditions.

The MAT reaches a maximum depth of approximately 750m, and therefore has potential for experiencing stress-induced ground behaviours. To address this, the TBM has been designed with reserve thrust and torque capacity, tapered shields and the ability to over-excavate.

The drive also has the potential for experiencing high groundwater inflows, a risk which is exacerbated given the downward drive direction. To address these challenges, the TBM has extensive probe drilling and pre-grouting capabilities, in addition to substantial dewatering pump capacity.

The second TBM to commence excavation is supplied by Herrenknecht and will bore a 2.7km long Emergency, Cable and Ventilation tunnel (ECVT), which also accesses the power station complex, nearly parallel to the MAT.

Beyond this, the TBM will continue its drive up a 25-degree inclined pressure shaft to the upstream surge shaft, before further continuing into the western portion of the headrace tunnel.

In addition to the challenges faced by the CREG machine, this TBM must manage a complicated tunnel alignment. The drive will initially commence at five degrees downward, before later transitioning to 25 degrees upwards, requiring all walkways, platforms, equipment, cranes, segment handling and installation systems to be capable of adjustment to compensate for the varying inclination.

Additionally, the machine spoil conveyance system has been designed to transition from a belt conveyor to screw conveyor system for additional control within the inclined section.

In the final stages of the drive, the TBM will cross a major regional fault zone, within which ground conditions are potentially highly deformable.

For these reasons, the ability of the machine to investigate the conditions ahead of the face, pre-grout where necessary and in the worst case, overcome entrapment, are of great importance for managing tunnelling risks.

The third TBM, also supplied by Herrenknecht, will be used to bore the majority of the headrace tunnel, commencing near the upstream reservoir and completing its drive some 15km downstream, at the intersection with the end of the second TBM’s drive.

This drive is situated within a complex and highly-variable alpine, geological and hydrogeological setting. This presents many geotechnical challenges associated with faults, varying lithologies and potential groundwater inflows.

The machine therefore includes the extensive mitigation pre-investigation and grouting capabilities and other risk mitigation measures as described above. However, uniquely, the third TBM is a dual-mode type, capable of operating in both open and closed (slurry) modes.

This capability has been specified to manage the potential occurrence of naturally occurring asbestos along the drive.

Each of the three TBMs have successfully completed factory acceptance testing and more recently, transport to Australia. The machines are currently being prepared for progressive assembly, commissioning and launch.