The 23.6MW Umbata Falls run-of-river hydroelectric plant on the White River in Ontario, Canada, has been developed through a partnership with Innergex and the Ojibways of the Pic River First Nation. Renaud de Batz gives more details 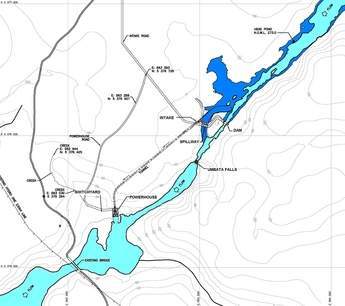 The Umbata Falls project is a success story on a number of fronts. For one, the project was executed while balancing First Nation community interests with the private sector objectives. At the same time, it helped the Ontario government attain its renewable energy targets. In addition, it was designed to be a green project, with consideration to environmental and visual impacts to the land.

Umbata Falls brought much-needed jobs to a rural community, circumventing the release of 90,000 tons of CO2 (based on electricity generated from coal), and offering an average production of 109,102MWh annually. Completed in just over five years from conception to completion, it serves as a model and experience to build on for future.

Taking a stake in the project

The White river is a large brown boreal forest river that arises southeast of the town of White river in Ontario, Canada, flowing approximately 200km before discharging into Lake Superior. Interest in hydro power development on the White River spans over the last 50 years, with the identification of a dozen of potential water power sites, nine of them economically feasible. The total potential hydro power on the White river is approximately 63MW, of which 23.6MW is attributed to the Umbata Falls project.

Located approximately 30km southeast of the small northern Ontario Town of Marathon, the Umbata Falls hydroelectric project was developed through a partnership with the Ojibways of the Pic River First Nation and a subsidiary of Innergex Renewable Energy Inc, a Canadian green power producer. They respectively own 51% and 49% in Umbata Falls Limited Partnership (UFLP), the owner of the project. The partnership is proving to have economic potential for both parties, while providing the government of Ontario the ability to fulfill its mandate to increase production of renewable energy.

The Ojibways of the Pic River First Nation is a community of approximately 400 persons. The Ojibways were first allocated the rights to develop the land surrounding Umbata Falls by the Government of Ontario in 1993. The Ojibways community is highly involved in renewable energy development in the area including two other local hydro developments – Wawatay on the Black river and Twin Falls on the Kagiano river. In addition, it has an active economic stake in wind power, forestry and mining development projects.

Traded on the Toronto Stock Exchange under the symbol INE, Innergex is in the business of developing, designing, operating and managing independent renewable power projects including hydro plants and wind farms. Besides its own projects, Innergex also manages the assets of Innergex Power Income Fund, in which Innergex holds a 16% interest stake. Altogether, projects developed, managed and operated by Innergex since 1990 total more than 350MW of installed capacity.

Since 2004, the Ontario government vowed to take action to stimulate the development of privately funded renewable energy generation projects, such as small hydro and wind farms, through the restructuring of the electricity sector. In August 2004, the government launched its first request for proposals to develop 300MW of new renewable energy.

The Umbata Falls project was submitted in response to that request for proposals and was subsequently awarded a renewable energy supply contract (RES contract) on 24 November 2004.

This RES contract will contribute to the government of Ontario’s goal of producing 2700MW of new renewable electricity. With an average production of approximately 109,102MWh, the Umbata Falls project will avoid the release of more than 90,000 tons of CO2 annually (based on electricity generated from coal). Certified by the EcoLogo Program, Umbata Falls benefits from the ecoENERGY Initiative of the Canadian federal government to support renewable energy production in the country. The programme provides a C$10 (US$8) per MWh incentive payment for the first ten years of operation.

The RES contract provides for a firm price for the energy produced at the Umbata Falls facility, with a specified inflation escalator over a period of 20 years. This agreement offers long-term income stability during a long portion of the debt repayment period, reducing the financial risk or uncertainty for both partners and bringing stability to the expected returns.

Michel Letellier, president and chief executive officer of Innergex, explains: ‘Innergex understands the importance of working in harmony with its surroundings. As such, the Innergex management team analyses closely how to minimise the environmental impact of its projects and listens to the hopes and expectations of the surrounding communities, from the planning stage to completion.’

Indeed, the Umbata Falls hydroelectric project not only helps Ontario in reducing its CO2 emissions, but also provides long-term economic growth opportunities for the Ojibways of the Pic River First Nation, with significant positive impacts on the community in the short and long term. Twenty per cent of the jobs during construction were allocated to the community, while two permanent operators have been employed there since the plant entered operation. Also, income from the project will provide funding to implement long-term programs developed by the First Nation community, including housing improvements, community infrastructure investments (ie, roads, water, sewer, fire and emergency services, recreational facilities), educational programming, health and social services and further economic development.

The site of Umbata Falls offered a natural gross head exceeding 30m, including a fall of 27m and rapids flowing through a narrow canyon. With a drainage area of 5267km2, the average flow of the river at Umbata Falls is about 64m3/sec. The highest flows occur in May and June in association with snowmelt and spring rains, while lowest flows occur in February and March.

Acres International from Niagara Falls was involved in preliminary design studies as well as the complete environmental assessment of the project. Design engineering during construction was assumed by BPR Groupe Conseil from Quebec working for the general contractor. After analyzing several options with different layouts and capacities, as well as considering environmental and visual impacts, the project was developed with the following key components:

• A concrete overflow crest weir located approximately 180m upstream of the crest of Umbata Falls within the main river channel. This structure has been located far enough from the Umbata falls to preserve their natural aspect.

• A head pond created by weir and sluice structures, extending approximately 850 m upstream and inundating an additional 3.2ha of land.

• An intake/diversion channel approximately 210m in length, 6-8m in depth and 18m in width. The channel, excavated to the favour of an existing depression, conveys the water to the tunnel intake and diverted the river flow during the construction of the main weir.

• A three bay spillway structure located approximately 150m upstream of the crest of Umbata Falls within the intake/diversion channel on the northwest side of the White river. The spillway includes two bays equipped with sluice gates and a third bay equipped with two sectional gates. The maximum discharge capacity of the spillway is 610m3/sec. With the additional discharge capacity of the overflow crest weir of 160m3/sec, the total maximal capacity of the upstream structures is 770m3/sec, exceeding the 720m3/sec required for a flood of occurrence 1:1000 years.

• An intake located adjacent to the sluice structure.

• A steel penstock, 4.6m diameter and 41m long, including 35m of tunnel concrete embedded steel lining and 6m outside of the tunnel and consisting of a bifurcation.

• A switchyard located adjacent to the powerhouse including step-up transformer (generator voltage to 115kV) and line protection.

• The two units were commissioned during the fall of 2008 and the Commercial Operation Date (COD) has been fixed to 12 November 2008 according to the requirements of the Ontario Power Authority. Turbines and generators have been successfully submitted to performance index tests and the annual expected production of the plant is approximately 109,102MWh.

Design and construction of the project components have a performance expectation of 40 years, according to industry recognized standards (Good Utility Practice).

The Umbata Falls project was completed within a few months beyond its expected five-year development life with a budget right on target. The estimated capital costs of C$60.4M (US$48.6M), including C$43.5M (US$35M) direct costs and C$16.9M (US$13.6M) indirect costs, were strictly adhered to. The budgeted amount of C$3M (US$2.4M) for contingencies covered additional delays and design changes. Financing of the capital costs was 85% through non-recourse project financing covered by the Bank of Montreal with the remaining 15% of equity provided by UFLP.

The RES contract was signed with construction to start in 2005 and commercial operation to begin by 1 March 2007. Meanwhile, environmental regulations changed in Ontario, requiring permit and planning changes that impacted the timeline. Thus, with the agreement of the Ontario Power Authority the expected commercial operation date was moved to July 2008.

However, with construction and development of hydroelectric projects at peak, suppliers of components were in high demand to satisfy orders from around the world. With delays incurred in the manufacturing of some electromechanical components, the expected commercial operation date was postponed to November 2008.

Construction of the project, despite the fact that the site was isolated and far away from all suppliers, was successfully conducted. The general contractor, CRT Construction from Quebec (QC) was responsible for site and scheduling management. In addition to the civil contract awarded to CRT Construction, five other contracts were signed:

• Hydro ECI from Granby QC for supply and installation of electrical and automation components.

• MGB from St-Pie QC for supply and installation of the switchyard components.

• Powertel from Whitefish, Ontario (ON) for the construction of the transmission line.

• Pic River Development Corporation from Pic River, ON for all the clearing works.

Rehabilitation of an existing 20km long road started during the winter 2005/2006 and the 4km of new access road was completed during spring 2006. The road construction works were often interrupted because of the nature of the substrate, a thin silty sand easily eroded during freshet and rain events. This required re-design of the erosion protection to prevent creek contamination and landslide along the open cuts.

The excavation of the tunnel was conducted conventionally with a drill and blast method using two Jumbo machines and scoop trams. Beginning in August 2006, the 460m long tunnel excavation was completed in under three and half months including the intake excavation, consolidation and final cleaning. The installation of the steel liner and the penstock bifurcation was completed in two months, including the concrete embedment.

The diversion channel excavation began in July 2006 and was completed in two months excluding the rock plugs maintained until November 2007. The civil part of the intake and spillway were completed and the gates installed during the summer 2007. Due to the exceptional flows occurring during spring and summer 2008, the construction of the gravity overflow crest dam had been delayed and its construction was finally completed in fall 2008.

The powerhouse construction really began in April 2007. Most parts of the building, including concrete phase 1, superstructure and overhead crane, were completed early in 2008. The delivery of electromechanical equipment started in November 2007 with the draft tube liners, the turbines in April 2008, the generators in June 2008 and finally the Butterfly inlet valves in August 2008. The initial synchronization occurred on 4 November followed by the commercial operation date fixed to 12 November 2008.

The project proved to be a win-win situation for all partners involved, during its construction, and into the future.

For more information on this project and other renewable energy schemes, please visit www.innergex.com.