Hydroelectric dams are making a comeback in the US. But instead of erecting new structures, savvy engineers are retrofitting existing dams without hydro power facilities, or low efficiency or under sized hydro facilities to harness water’s potential power and provide a clean, renewable source of energy, writes Norman Bishop 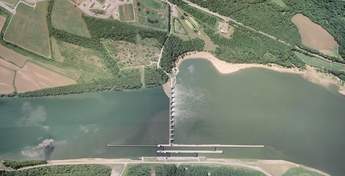 The banks of the Ohio River are hardly the place most people would look for one of the potential solutions to the world’s increasing energy demands. But there, along a river that eventually flows into the mighty Mississippi, engineers are busily working on a handful of new hydroelectric projects on behalf of a not-for-profit wholesale energy supplier called American Municipal Power – Ohio Inc. (AMP-Ohio). The projects will eventually combine to generate up to 344MW of electricity, enough to provide annual power for about 175,000 homes. AMP-Ohio successfully developed the Belleville hydro project for 42 of its members in the mid 1990’s.

But visitors to these sites will notice the conspicuous absence of several hallmark signs of dam construction, such as earthen or rock mounds, or the trucks and equipment that would traditionally be used to construct a dam. While the word ‘dam’ for many engineers conjures such images, these projects don’t fit that traditional mold. In fact, these initiatives and more than 70 other similar site initiatives nationwide represent one of the latest and most promising trends in the world’s quest for renewable energy: retrofitting existing dams to add hydro power capacity.

While hydroelectric power will not on its own solve the world’s seemingly insatiable appetite for energy, harnessing water can help – and likely will – play an increasingly important role in the mix. With soaring prices of oil and natural gas, along with concerns related to global climate change, sustainable hydro power is becoming an increasingly attractive option in satisfying the world’s growing energy needs.

Today, hydro power currently accounts for about 19% of the world’s electricity, or 715,000MW, up from 16% in 2003, according to a recent study by REN21, an international policy group based in Paris. That percentage is even higher when looking specifically at electricity derived from renewable sources, with hydro accounting for more than 63% of that total, according to the policy group’s analysis.

Based on recent developments, the interest in hydro is growing, both in the US and overseas. Many nations are evaluating the viability of these projects and have determined that constructing new dams to generate hydroelectric power is one of the most viable options available to meet their nation’s anticipated energy needs.

In the US, the current focus is not on building new dams but rather tapping existing ones for their hydroelectric potential. The added energy available from the water passing at these dams would otherwise be wasted. This is accomplished through a variety of engineering strategies, including adding hydro power capabilities at non-power dams; expanding pumped-storage stations; adding conventional small hydro facilities; and installing turbines on water conveyances. All told, more than 70 such projects are in the works nationwide, with the collective potential to eventually generate over 11,000MW.

While that figure represents a significant amount of new electricity being added to the nation’s grid, it is just a fraction of what is possible. According to the national-hydropower-association, less than three percent of the US’ 80,000 dams currently feature hydro capabilities. In addition, adding pump-storage stations at existing reservoirs could generate an additional 78,000MW, based on conservative estimates made by industry engineers. This means that as municipalities and utilities examine their strategic alternatives for power generation, and seek to adhere to state-mandated requirements to increase their energy generated from renewable sources, dams and reservoirs represent a vast pool of potential energy.

There are at least three primary reasons driving the renewed interest in hydro in the US. First, these projects utilise existing dams, largely avoiding the civil engineering and construction tasks associated with erecting new structures. Compared to building a new dam, adding hydroelectric capabilities at an existing dam saves time, money and regulatory issues. The cost savings are found in a variety of areas, including site evaluation, design, testing, labour and the cost of raw materials. The development and construction time is also shortened, which means electricity is generated more quickly and with a smaller initial capital expenditure.

Secondly, using existing dams mitigates many of the environmental issues often related to new dam construction projects, which historically have elicited concerns among citizens, politicians, environmental groups and media. Tapping existing dams does not require significant water way disruptions, and because these projects do not consume additional water to generate energy, disputes over water rights are not a major issue. In addition, most of these projects feature efficient turbines and environmentally friendly technologies, including devices that offer safe passage for salmon and other fish. As a result, tapping existing dams eases regulatory hurdles, making it easier for utilities and municipalities to garner public support and secure financing for these projects.

Thirdly, some existing dams have hydro power facilities that are either undersized and do not use all the available water resource, or have less than optimum efficient hydraulic turbine generation equipment. Better use of available water and more efficient hydraulic generating equipment can make a substantial improvement in terms of the actual electric energy generated.

However, there are hurdles to overcome. Licensing and permitting can be time consuming, expensive, and requirements vary somewhat by state, which makes predicting regulatory approval challenging and has discouraged some developers from moving forward with projects. While easier than requirements for erecting new dams, the process for adding hydro power capabilities at existing dams can be costly and requires significant technical, environmental and social studies and reporting. The US Federal Energy Regulatory Commission oversees this process.

Many of the dams receiving these upgrades were built decades ago, with original uses ranging from irrigation, public water supply, recreation and flood control. The construction of new, large dams in the US essentially halted during the late 1960s, shortly after the US government sought to build new dams in the western states. Public concerns mounted, and the government abandoned its plans, an event widely credited with marking the end of the large-scale dam construction in the US.

During the big build-out of US dams, a series of 19 locks and dams were constructed along the Ohio river. The structures, completed during the 1950s and 1960s, were in part used to facilitate the transportation of barges carrying commercial goods, primarily coal, to points throughout the Midwest. The dams, however, were not originally equipped to generate hydroelectricity.

Upon completion – expected in the next five to seven years – the sites will add more than 344MW of hydroelectric capacity to AMP-Ohio’s expanding portfolio of renewable energy.

Another upside to tapping existing dams for power generation is the proven viability of the technology. Water and damming has long been used for an array of purposes, dating back to the Roman aqueducts and the Egyptian irrigation systems, and more recently for flood control and power generation. The technology, while established, is being further refined to improve efficiencies and minimise any environmental disruptions.

What does this trend mean for engineers, government and the world? The answer is clear: the US is poised to tap a vast source of clean, renewable energy, in part by using dams already in existence. From New York to Louisiana to Washington state, utilities are examining the viability of such projects, evaluating sites and conducting feasibility studies. The trend represents the return of hydro power in the US and a possible offset to increasing energy prices and a key component to combat global climate change.

Norman Bishop is a vice president at MWH and is the firm’s hydro and dams market sector leader. He is based in Chicago and can be reached at +1 312 831 3515 or Norman.a.bishop@us.mwhglobal.com