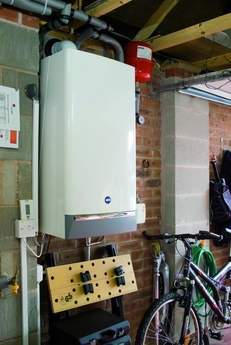 Gas domestic heating specialist Baxi has signed a preferred supplier agreement with British Gas (part of Centrica) to distribute the Baxi Ecogen microCHP unit. The aim is that the Ecogen units, which use free-piston Stirling engine (FPSE) technology, will be exclusively available to British Gas customers from the second quarter of 2009, when Baxi expects the appliance to be in commercial production.

Baxi believes Ecogen (pictured on the cover of this issue, and right) will be the “first commercially available wall-hung micro-CHP in the UK”– able to “make substantial savings on annual energy bills and cut household CO2 emissions by 20%.” For the UK market, wall hung boilers are the norm and Baxi sees Ecogen units as a direct replacement for conventional standard efficiency and condensing boilers. It is designed to be virtually noise and vibration free in a casing no bigger than a standard domestic boiler.

Ecogen consists of the Stirling engine microCHP system, rated at 1 kW electric and 6 kW thermal, integrated with an 18 kWt supplementary burner/boiler. The appliance is designed to meet heating and hot water needs as well as contribute to power requirements, with any excess electricity exportable back to the grid.

Baxi says about 1.5 million boilers are replaced each year in Great Britain and it is forecast that residential CHP could take 30% of this market by 2015, providing strong growth potential for Ecogen.

The partnership with British Gas will “provide the platform for Ecogen to become established and prove its worth with domestic customers,” says Baxi.

The FPSE technology being employed in Ecogen is being provided by Stirling engine supplier MEC, which took over the Stirling engine development work being done by Microgen, a subsidiary of BG Group that was working on wall mounted microCHP until 2007 when BG Group decided to end its involvement in this area. MEC supplies Sunpower FPSE technology and its shareholders are Sunpower plus domestic gas boiler companies (Viessmann, Vaillant, Remeha, as well as Baxi).

Ecogen is one of a portfolio of microCHP technologies that Baxi is working on, which includes PEM fuel cell based Baxi Innotech units (through its acquisition of European Fuel Cells in 2002) and Baxi DACHS reciprocating engine based systems (5.5 kWe/12.5 kWt) for multi-occupancy residential and light industrial applications (through the acquisition of Senertec, also in 2002). Baxi was also involved in the development of organic rankine cycle microCHP systems, and acquired the rights to Energetix Micropower in 2004, but has since chosen to focus its attention elsewhere.

A few weeks before the Ecogen British Gas announcement Baxi unveiled in the UK what it described as “the first permanent hydrogen powered house connected to the national grid”, in collaboration with the University of Birmingham and the Black Country Housing Group. This trial system is using a Baxi Innotech fuel cell microCHP unit.

The current version of the Baxi Innotech system (pictured lower right) is floor standing (pict. It is rated at 1.5 kWe and 3 kWt, with a 15 kWt supplementary boiler. Electrical efficiency is 32%.