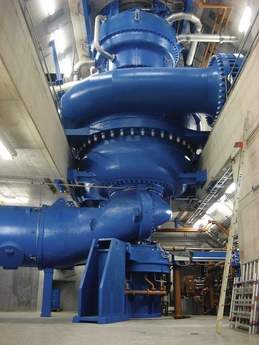 There’s no doubt that 2009 was an interesting year for pumped storage developments. A number of new projects were announced, while other schemes were given the go-ahead for redevelopment. As we come to the end of the year, we take a look back and highlight some of the most important developments to occur within the industry over the last 11 months.

At the start of the year, it was reported that US company Symbiotics Energy had submitted further development plans for the 700MW North Eden pumped storage project in Utah to the Federal Energy Regulatory Commission (FERC). This was followed by an in-depth report on the project in the April edition of IWP&DC.

Symbiotics received a preliminary permit for the project from FERC in late December 2008. It is developing the project through North Eden Hydro LLC, which has submitted a notification of intent (NoI) and pre-application document (PAD).

The preliminary permit covers studies for a potential pumped storage project in North Eden Canyon off Bear Lake in Rich County, Utah, close to the border with Idaho. Work on the PAD began in the third quarter of 2007.

It is envisaged that the project will have two dams and reservoirs plus a surface powerhouse fitted with seven 100MW pump turbines, a surface penstock and tailrace tunnel. The developer aims to produce approximately 2027GWh annually from the plant.

Company spokesman Justin Barker told IWP&DC that a conservative development budget of approximately US$700M has been set for the project, which it is hoped will become operational around 2011-12. He said the timing was related to the construction of the Gateway West transmission link to which the project would connect.

Symbiotics’ earlier attempt to develop a hydropower project at Bear Lake – in Hook Canyon – was a 1120MW scheme covering territory over Utah and Idaho but was dropped due to opposition.

In March, we included news that the national-hydropower-association (nha) had welcomed US Government’s recognition of the importance of pumped storage to the wider development of grid-connected renewable energy resources.

NHA said that expanding pumped storage capacity beyond the country’s existing resources for storing energy, dominated by 20.3GW of pumped storage, was a high priority. The resource offers major benefits in fast-response stabilization to the electricity transmission grids to help balance the fluctuating inputs of resources like wind power.

It called for the Government to build on recognition of the importance of pumped storage, as voiced by Energy Secretary Steven Chu, by establishing policies that encourage aggressive investment in projects using the proven, established technology.

The Association also announced it had established a pumped storage council to help develop strategies to speed development of projects. In a statement it said: “We are reaching out to all sectors of the energy industry, to the Administration, and to Congress to expand understanding of this technology and create sound policies that will serve all Americans.”

NHA added that a key goal is to help establish incentives, such as tax credits, that will attract investors and encourage rapid development of more pumped storage projects.

New projects in the UK?

New pumped storage developments in the UK looks likely following the announcement by Scottish and Southern Energy (SSE) in May that it would submit an application to Scottish Ministers to develop a 60MW pumped storage scheme alongside its 152MW Sloy hydroelectric power station, near Loch Lomond.

In an average year, Sloy produces around 120GWh of electricity and, according to SSE, converting it to a pumped storage facility will allow it to produce an additional 100GWh to help meet peak demand. The project is expected to require an investment of over £30m (US$48M).

SSE said at the time that it was also exploring whether other potential sites could be suitable for the development of pumped storage schemes: “Hydroelectric schemes which use stored water to generate electricity have an important part to play in meeting peak demand and also in complementing the growing, but variable, amount of output from wind farms,” said Ian Marchant, Chief Executive of SSE. “This means that developments like Sloy that increase storage and generation capability will play a bigger part in meeting energy needs as the development of renewable energy gathers pace.”

A few months after the initial announcement, SSE then officially announced plans two new pumped storage schemes in Scotland, with planning applications likely to be submitted in 2011.

The plants, to be located in the Great Glen, are expected to have installed capacities between 300-600MW. Although both schemes would require construction of a dam, the majority of the infrastructure is likely to be built underground, avoiding any impact in the Great Glen itself.

The company is planning to seek the Scottish Government’s formal opinion on the scope of the environmental impact statement for the projects, If the projects are given the go-ahead, they would be the first pumped storage schemes to be developed in the UK since work began on the Dinorwig scheme in Wales in 1974.

Also in May we reported that the Kops II pumped storage plant in Austria has been inaugurated by the developer Vorarlberger Illwerke AG.

The 450MW (3 x 150MW) underground plant is located near the Ill river in Montafon Valley in west Austria, in the province of Vorarlberg.

The facility is operating with separate pumps and Pelton turbines instead of reversible pump turbines. The design enables both turbines and pumps to be operated at the same time in “short hydraulic circuits”.

There is a head difference of just over 800m between the Kops upper reservoir and the Rifa lower, balancing reservoir. The pressure tunnel to the plant is 5.5km long and is of 4.9m diameter, there is a two-chamber surge tank and an almost 1.2km long, 3.8m wide steel penstock.

Voith Hydro and andritz Hydro supplied the pumps and turbines, respectively, plus other equipment.

Construction of the plant started in late 2004 and underground excavation was undertaken for the powerhouse and transformer caverns and associated tunnels to late 2005. The powerhouse cavern is 88m long, 30.5m wide and 60.5m high.

It was originally planned to have all units commissioned by the first half of 2008.

The US Federal Energy Regulatory Commission (FERC) issued support in August for the 636MW Smith Mountain Pumped Storage scheme to be relicensed with only some modifications to owner Appalachian Power Co’s submitted plans.

Following the Final Environmental Impact Assessment, and Statement (FEIS), the Commission’s staff reviewed the feedback on the draft EIS and made the recommendation mostly based on Appalachian Power’s resource management plans for the scheme. The owner plans no new capacity build at the facility .

The scheme comprises two dams (Smith Mountain, Leesville) and 586MW installed capacity at the main powerhouse plus 50MW at a second facility. The upper lake is 64km long and has a shoreline length of 800km.

The resource management plans include erosion and sedimentation, water management and quality, habitat and aquatic vegetation, recreation, navigation, and cultural and historical resources.

The 628MW pumped storage project is due to be commissioned in 2015. Earlier this year alstom Hydro was awarded the contract to supply the plant with four 157MW vertical Francis reversible turbines, four 170 MVA vertical asynchronous motor/generator units and further key equipment.

IWP&DC will bring you all the key developments in pumped storage in 2010. To make sure you’re kept up-to-date, sign up for our twice weekly email newsletter at www.waterpowermagazine.com