A recent refurbishment project has transformed Binga – among the oldest hydroelectric facilities in the Philippines – into a modern, state of the art plant. By Emmanuel G. Lopez and Rhoda S. Santos. 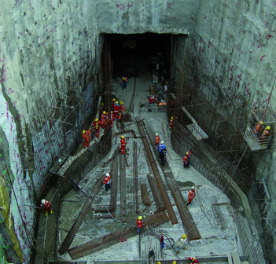 The Binga hydroelectric power facility lies in the Northern region of the Philippines, in a province called Benguet. The 100MW power plant is connected to a zoned earth, rockfill embankment dam with an inclined clay core. The facility began commercial operation in 1960 – four years after construction began by the Philippine government for the purposes of power generation and flood control.

In 2001, the government restructured the power industry and a component of this initiative was the privatisation of state-owned power facilities. SN Aboitiz Power (SNAP, a joint venture between SN Power of Norway and local company Aboitiz Power Corporation) won the public bid in 2007 for the Binga power plant, which was sold as a package with nearby Ambuklao hydro facility. Even as SNAP took over operations the following year, the dam remained government-owned.

At the time, the plant had been operating for almost 50 years. SNAP-Benguet undertook a rehabilitation program to construct a new headrace and higher intake, modernise the plant control systems, replace the electro-mechanical components, install new auxiliary equipment, and upgrade its capacity to 125MW.

Civil works for the new headrace and intake began in May 2010. Due to silt accumulation, the new intake would be 15m higher than the old one. A 240m access tunnel was built to connect the new 160m headrace and intake to a part of the existing headrace. This phase was completed in September 2011.

The next step was replacing the electrical and mechanical components. Each of the four units was taken down and replaced with new turbines, generators, transformers and main inlet valves. To keep the plant in operation, unit rehabilitation was done one at a time. This was the approach used in order to keep the energy produced available to the grid.

"It was also extraordinarily challenging in terms of logistics and safety given the confined underground cavern type powerhouse was accessible only via a vertical drop shaft."

Even then, it meant shutting down each unit a period of about six to seven months to complete the refurbishment and rehabilitation works. It was also extraordinarily challenging in terms of logistics and safety given the confined underground cavern type powerhouse was accessible only via a vertical drop shaft.

One notable achievement was keeping the remaining three units running at a very high availability and reliability index while rehabilitation was being done on one unit. During the rehabilitation, the availability rates of the un-rehabilitated units were among the highest in the industry, significantly higher than when the previous owners were operating them.

Rehabilitation of the first unit (Unit 4) commenced in April 2011, followed by Unit 1 in January 2012 and Unit 3 in July 2012. Work on the final unit (Unit 2) was completed in July 2013. The 50-year old plant was transformed into a modern, state-of-the-art facility: new transformers were installed at the switchyard and the powerhouse buildings also underwent repairs.

The control room was physically relocated from underground to ground level. It was also automated so that large, multiple panels with knobs and dials were replaced by SCADA (Supervisory Control And Data Acquisition) systems and computer monitors.

Although its nameplate capacity is 125MW, the plant is actually capable of generating up to 132MW and potentially even more. Binga now generates additional capacity, which is being traded at the Wholesale Electricity Spot Market, and supplies ancillary services for grid stability. Its expected annual output is about 426GWh.

Completion without incident; under budget

The Binga rehabilitation project was completed with no major environmental or safety incidents. In 2010 when the project began, the company entered into a Memorandum of Agreement with local government units and community groups on the monitoring of the Binga hydropower plant rehabilitation and refurbishment project. The multi-party monitoring team’s key role was to monitor the project in terms of compliance with the conditions of its environmental compliance certificate. SNAP-Benguet actively involved itself during the project implementation phase and proactively addressed potential issues even before these are raised.

"The project was completed a year ahead of schedule at a cost 6-7% lower than the budget."

The project was completed a year ahead of schedule at a cost 6-7% lower than the budget. The gain was due to some changes from the original plan. Also, the project team had constantly coordinated with contractors and equipment suppliers to deliver based on schedule. Close coordination with all the stakeholders, such as with the grid operator, also helped in achieving smooth commissioning of the units, which also contributed to the early completion of the project.

The uprated output of the new Binga is more than 20% of the total installed capacity (or portfolio) of SNAP Group, making it a key element in the company’s vision to be the leading renewable energy provider. The additional capacity is also seen to help ease the tightening power supply and demand situation in the Luzon grid.

A stable power supply has always been seen as a key component of economic development, and for a country like the Philippines with ambitions for economic growth, additional capacity is important. Furthermore, power supply that comes from renewable energy sources such as hydro also contributes to addressing the growing concern on climate change by providing alternative source from plants using coal and diesel. In addition the Binga upgrade is approved and registered to generate carbon credits under the United Nation’s Clean Development Mechanism.

"The refurbishment project has transformed Binga… to a modern, state-of-the-art hydroelectric power plant"

Living up to its objective of making a difference in the communities where it operates, Binga engaged its stakeholders during the project to reinforce support, and it has significantly contributed to local revenues based on increased generation. It has also implemented development programmes in education, health, environment and governance, allocating a voluntary fund for the development of its communities.

The refurbishment project has transformed Binga, which had been among the oldest hydro facilities in the Philippines, to a modern, state-of-the-art hydroelectric power plant. The achievement was celebrated on 17 October 2013 when SNAP held an inaugural ceremony in its plant grounds. Earlier in September, it received a Certificate of Compliance from the Philippines’ Energy Regulatory Commission signifying that the project has complied with technical, financial and environmental requirements.

As SNAP’s president and chief executive officer Emmanuel Rubio says: "Binga is an exemplary display of the collective and collaborative power of the SNAP-Benguet team, its shareholders, host communities, and project partners to transform blueprints into life. Binga now stands not only as a reliable source of renewable energy for the country but also as a partner, creating shared value for its stakeholders."