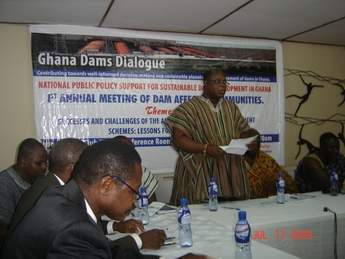 The development of hydro power in Ghana spans almost five decades. The first hydro power dam was constructed in the 1960s at Akosombo, and it is often accredited with powering the economic growth of newly independent Ghana. As the country’s energy appetite expanded with further industrialisation, it augmented its energy supply capacity in the 1980s with a second dam at Kpong. A third hydro dam is currently being constructed at Bui to improve energy security. The new dam has the potential to generate enough power for export to Burkina Faso, Cote d’Ivoire and Mali. A transmission system to export excess power from the Akosombo dam to Togo and Benin has been in place since 1972.

Although there is widespread consensus behind the need for hydro power in Ghana, and the three dams have the backing of various sections of society, they have not escaped controversy. In hindsight, the mitigation measures that were put in place to deal with the social, environmental, health and livelihood impacts of the existing dams have been inadequate. This is partly due to the absence of environmental impact assessment regulations in the country at the time of their construction. Various pieces of legislation have since been passed, setting up environmental and social impact assessment (ESIA) procedures. Although the Bui project was mandated to undergo such procedures, a number of challenges remain in implementing the necessary environmental and social safeguards. It is clear that lessons must be drawn from past experiences to guide the equitable, transparent, participatory and sustainable development of future dams in Ghana.

The Ghana Dams Dialogue (GDD) is playing an increasingly pivotal role in this process. The GDD is an independent platform that seeks to provide an arena for constructive deliberations around issues related to hydro power dams. It brings together diverse actors with a stake in the development of dams in the country. To date, GDD events have attracted representatives from government ministries, departments and agencies; research organisations; local authorities; non-governmental organisations; the media; dam-affected communities; traditional authorities; national utilities operators; the private sector; as well as international financial and non-financial organisations.

The GDD has received support from the German Gesellschaft für Technische Zusammenarbeit (GTZ) since its inception in April 2006. It has evolved into a sixty-member Forum, which is overseen by a 16-member National Coordinating Committee (NCC). Secretariat functions are provided by a team from the International Water Management Institute (IWMI) and the Volta Basin Development Foundation (VBDF). The former is a member of a network of international, not-for-profit research centres (the Consultative Group on International Agricultural Research; CGIAR), while the latter is a Ghanaian non-governmental organisation. IWMI also acts as a facilitator to the dialogue.

The GDD has taken its cue from its global-level counterpart, the United Nations Environment Programme-Dams and Development Project (UNEP/DPP) (http://www.unep.org/dams/), a successor to the World Commission on Dams (WCD) (http://www.dams.org/). The GDD is an effort to nationalise the WCD’s strategic priorities and core values for decision-making around dams in Ghana.

In the spring of 2006, the founding members of the GDD – some of whom had participated in the WCD consultations – formed a Task Force, which included representatives from the VDBF, the Volta River Authority (the operator of the existing hydropower dams in Ghana), the Ministry of Energy, the Ministry of Water Resources, Works and Housing, Conservation International (an international NGO) and the Water Resources Commission (the government authority responsible for regulating the water resources of the country). Its remit was to debate the structures, membership and activities of a future platform for hydro power stakeholders in Ghana. This Task Force formalised itself into a Steering Committee, and with further support from GTZ and the United Nations Environment Programme/ Dams and Development Project (UNEP/DDP), organised a National Consultative Meeting in January 2007 to solicit input from a range of interested parties on the final form that the GDD should assume and the issues that it should pursue.

In September 2006, IWMI was approached to act in an advisory capacity to the Steering Committee of the GDD, partly due to its prior participation in the UNEP-DPP global steering committee. Later, when the GDD Forum, the NCC and the Secretariat were formed, IWMI became the host for the Secretariat. The GDD thus found an institutional home that has name recognition and a reputation as a neutral body.

Since 2007, the GDD has convened its sixty-member Forum annually. These public events have brought together 230 participants from member organisations and beyond. The theme of the first Forum-level meeting, which was held in September 2007, was Using Dams for Development – Institutionalising the Multi-stakeholder Process in Ghana. The event aimed at strengthening information exchange between communities at the three dam sites, particularly around compensation, resettlement and participation in decision-making. It also discussed ways in which research on hydro power dams could be directed for the benefit of a wide group of stakeholders.

The second Forum-level meeting was organised in February 2008. The theme of this two-day event was Contribution of Community Involvement, Compensation, Research and Capacity-Building on Dam Development in Ghana. Discussions centred around strategies for community participation in the development of dams, compensation for dam-affected people, and the robustness of research on the environmental and social impacts of dams. An important outcome of this second Forum-level meeting was the drafting of a communiqué that outlined issues that should be taken into account in addressing the impacts of existing dams and in developing Ghana’s future hydro power capacity.

The Forum-level meeting also included a workshop on the impacts of climate change on the Bui hydro power project, which allowed stakeholder groups to debate the threat of climate change to the power generation capacity of the project. The event prompted positive feedback from participants. Indeed, the workshop itself demonstrated the collective learning that occurs when diverse stakeholder groups meet.

The NCC, in turn, has met seven times to review progress and to strategise for the future. It held its sixth meeting in March 2009 at the project site of the Bui dam. Members of the NCC had the opportunity to meet with local communities and the authority responsible for the construction of the dam. The NCC was able to brief both the communities and the authority on the activities of the GDD, and to hear their perspectives on the development of the dam to date.

Multi-stakeholder platforms, such as the GDD, bring together actors with varying degrees of leverage in decision-making processes. When facilitated well, they offer an environment in which the concerns of a range of stakeholders can be expressed democratically. The GDD has found it valuable to occasionally arrange one-on-one meetings with individual stakeholder organisations. A ‘rapid response task force’, consisting of members of the NCC and the Secretariat, represents the GDD at such occasions. These meetings serve a number of purposes. At times, they allow less empowered stakeholders to express their concerns in the absence of more dominant voices. At others, they serve as opportunities for the GDD to strengthen the involvement of those stakeholders, who are in a position to take forward issues that have been decided upon collectively.

Recently, for instance, the task force met with the new management team of the authority responsible for the development of the new Bui dam. The task force introduced the GDD to the recently appointed leadership and sought its commitment to the dialogue process. The task force has also visited the editorial team of the Daily Graphic, a leading newspaper in Ghana. The publication runs a consultative process that brings issues of public concern – particularly around governance – to the attention of decision-makers. The GDD had identified this as a further possible channel of uptake for issues discussed at its meetings, and it was interested in exploring synergies between the two consultative platforms.

In addition to such one-on-one meetings with organisations, the GDD has also begun to convene so-called networking meetings among groups of similar stakeholders. This is in efforts to encourage the stakeholders to interact beyond the confines of Forum-level or NCC meetings. Such networking events provide participants with an opportunity to exchange information, to explore common interests and to coordinate their involvement in decision-making around hydro power dams.

As a multi-stakeholder platform, the GDD strives to be flexible and dynamic in order to respond to changes in its context. The platform was recently used to mediate in disputes that had arisen between communities affected by the Akosombo and Bui dams, and the authorities they held responsible. Both the communities and the authorities are members of the GDD, and they recognised that the presence of other GDD members would create an impartial backdrop for discussion. This setting encouraged the parties involved to move towards a mutual understanding and resolution of the issues.

The activities of the GDD also extend to research. The Secretariat has both undertaken and commissioned research on compensation and resettlement schemes for communities affected by the Akosombo and Kpong dams [1]; community participation in the Bui dam project [2]; and the roles that research and capacity building play in the development of hydro power dams [3]. Currently, the GDD Secretariat is undertaking an institutional study to ‘pick apart’ the processes that have given rise to the individual dams, as well as the constellations of administrative structures that have been involved. Such a study is warranted given the changes in the context of decision-making that have taken place since the development of Akosombo: authority has been devolved from a central government to regional and district level entities, and new regulatory frameworks – and agencies to administer them – have been established. Ultimately, the study will serve to ensure that all relevant authorities are included in the Dialogue and to enrol them in the Dialogue in a manner that best reflect their roles.

The GDD is also involved in research that will establish a baseline database on the livelihoods and socioeconomic conditions of affected communities. This will enable continual and comprehensive monitoring of the impacts of the Bui dam on the well-being of such settlements.

Insights from past and present research have been disseminated through presentations at Forum-level meetings, as well as through a quarterly newsletter and a comprehensive and up-to-date website (http://ghanadamsdialogue.iwmi.org/). These serve as outlets for knowledge and information sharing, and allow GDD members to express opinions equitably without fear of repercussions.

There is palpable momentum behind the GDD as stakeholders are showing greater commitment towards the Dialogue and trust in its effectiveness. News of the platform has spread beyond Ghana. The GDD was recently approached to participate in a sub-regional study seeking to identify ‘best practice’ in terms of decision-making around large infrastructure projects, including hydro power dams. The inclusion of the GDD in the study serves as further indication that the GDD is carving out a legitimate space for itself alongside other dams-related decision-making nodes.

The GDD is currently planning the third Forum-level meeting for October 2009, and tentative topics for discussion include the impact of dams on the livelihoods of affected communities, as well as the Hydropower Sustainability Assessment Protocol (HSAP) [see June 2009 edition IWP&DC]. Indeed, the Hydropower Sustainability Assessment Forum (HSAF) has gauged the willingness of GDD members to participate in the testing of its new protocol on the Bui project. This would require the firm commitment of the authority responsible for developing the Bui dam. It is hoped that the protocol will rouse the interest of all parties, but it is early days yet to confirm.

The GDD is currently in its third phase, which will run until December 2010. During this period, the Dialogue will focus on providing tools for, and building the capacities of stakeholders to take part in, decision-making. With their unique vantage points on the Ghanaian hydro power sector, the GDD and its member organisations have much to contribute towards the participatory, equitable and transparent development of dams.