Contractors cutting tunnels through the complex rock of the Himalayan foothills for India's Parbati hydroelectric project Stage III are using rigs and rock drills for drilling and bolting, after conditions in some parts of the site were found to be unsuitable for TBM use 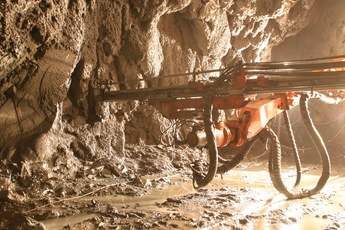 Tunnelling in the Himalayas is a notoriously difficult process, due to the varied nature of the rock encountered, the instability of some areas, and seasonal snowfall and rain.

Stage II of the Parbati hydroelectric project, which was begun in the second half of 2002 and is now nearing completion, has used tunnel boring machines (TBM) but work proved highly complex, with frequent failures of joints and rockfalls that disrupted progress. Two different types of TBM were used, a single-shield and a double-shield machine.

Stage I of the Parbati project had been abandoned before properly getting underway, due to environmental considerations, and consequently Stages II and III represent the two halves of a giant scheme that will provide, respectively, 800MW and 520MW of electricity to the North Indian electrical grid.

The project is centred on the Parbati river, a tributary of the Beas river in Himachal Pradesh, and is being undertaken by the National Hydroelectric Power Corporation (NHPC) in conjunction with the Himachal Pradesh Government.

Stage III is based at Kullu, a picturesque district famous for its terraced agricultural fields and mountain scenery, and a popular destination for Indian and international tourists. It is being built at a cost of 23.04B rupees (approximately US$567M), with budgetary support from the national government and from financial institutions arranged by NHPC.

Located on the Sainj river, another tributary of the Beas, Stage III is downstream of the Stage II power house and will utilise regulated discharge from the earlier phase along with inflow from the Sainj. There is a 43m high rockfill dam that will receive water from the tailrace of Stage II, and after power generation in its own tailrace and power house, Stage III carries the water back to the Sainj. Consequently, no major diversion of the river is needed.

Tunnelling work involves cutting a 7.98km long headrace tunnel of 7.25m diameter, a 13m diameter 113.75m high surge shaft, a 2.7km long tailrace tunnel, and two pressure shafts, one of them 375m and the other 345m, bifurcating into four 3m diameter penstocks. The underground power house will be 123m in length, 22m in width and 44m high and will be equipped with four 130MW capacity generating units.

The rock being encountered on Stage III consists mainly of schistose quartzite, mica schist and granite gneisses, with joint infillings of clay and fluvio-glacial material.

Although TBMs offer a potentially very fast method of excavation with proper support of the rock, Stage II demonstrated that when unfavourable conditions are encountered without warning the practical consequences are often far greater in a TBM driven tunnel than a drill blast method.

Although part of the work at Stage II, namely the twin pressure shafts, have been successfully carried out with a TBM, conditions in the areas where the bulk of the tunnelling are taking place indicated that drill-and-blast techniques would be more suitable. This involves using a fleet of drilling and rock bolting machines from Sandvik, with shotcrete and steel sets to stabilise the excavation, and telescopic folding shutters for the final lining. Drill-and-blast was also the obvious choice for the power house excavation.

Early last year, NHPC awarded a Rs 4390.8M (US$108M) contract for Lot 1 of the project to the consortium comprising Larsen & Toubro (L&T) and Patel Engineering to build the diversion tunnel, the rockfill dam along with cut-off wall, desilting chambers, and a 5.8 km length of the headrace tunnel. Patel Engineering and Larsen & Toubro is constructing the dam and the underground works.

The Jager-Gammon consortium has the Lot 2 contract for the power house construction and associated underground works including part of the headrace tunnel, the surge shaft, the pressure shaft and the tailrace tunnel including adits. The package is valued at Rs 6000M (US$148M), and was also awarded at the beginning of 2006.

Sandvik’s regional head of service engineering, Mahabirsingh Chauhan, said that the Jager-Gammon JV had taken delivery of four Axera T08-290 jumbo rigs equipped with two drilling booms and one basket boom. These are able to drill holes of up to 51mm diameter at a rate of 3m per minute.

There is also an Axera T08S-290C rig with two drilling booms and one basket boom, the machine differing from the other four units in that it is equipped with TCAD (Tamrock Computer Added Drilling) and TPC electrical controls. The high-power drifter makes drilling even faster says Sandvik, and the computer helps give greater precision to the profile of the tunnelling, with the unit being used where timing is particularly sensitive, for example on Gammon’s part of the headrace tunnel.

Gammon’s senior project manager Rajendra Singh says the company is running to a 56-month schedule with the contract due for completion in the second half of 2010. He said that at the end of April this year, Gammon had completed around 8% of the excavation work.

‘Up to this period, we had drilled approximately 221,000 drill metres, using mainly 45mm hole diameter on the face drilling, and 38 mm hole diameters for the rockbolt drilling,’ said Singh.

Sandvik has deputed three engineers to care round the clock for all five machines since the date of commissioning, achieving availability of more than 90%.

Singh said the tailrace tunnel is progressively ahead of schedule. As to the main access tunnel, he said the 1:10 slope had been a challenge for the drill-and-blast method: ‘Because of the high gradient and the excessive seepage of water, the biggest challenge was to drill and charge the bottom hole – but we have been happy with the progress.’

The Axera TCAD is in use on the 7.25m diameter horseshoe shaped headrace tunnel, being undertaken with a full-face excavation.

‘We are drilling 90 to 100 holes of 45mm diameter and a depth of 4000mm per cycle, using a V-cut drilling pattern,’ said Singh. ‘Tunnelling work is being assessed in excavation cycles, with drilling, blasting, excavating and supporting constituting one cycle. Working on a 24-hour basis, the tunnelling is progressing at the rate of approximately three cycles every two days on average, with an average 3.2-3.5m advance being achieved per cycle.’

‘We are on schedule, even though the rock conditions are very poor,’ said L&T-Patel project manager S K Upadhyay. ‘Outside the tunnelling works we also have instability to face when trucking the spoil down to the disposal areas, because rock falls and mud slides along the haul road can often disrupt the works.’

Both contractors are using Sandvik 45mm drill bits for face drilling and R28 38mm for rock bolting. Both types use spherical buttons.

The contractors are grinding their drill bits every 300 drill metres, with three to four grindings achieved for each bit and an average per bit of 600 drill metres. L&T has a mobile grinding unit that travels between the machines and collects the bits and grinds them on-site ready for refitting, while Gammon has a stationary grinder located inside its main workshop.

In each case the drill depth is 4m, achieved with 90 to 95 holes being drilled per cycle at a total time of 2.5 hours.

Powergel water resistant explosive is used in the holes. The cartridges are packaged in plastic film, which readily splits during tamping to maximise coupling and bulk strength within a blasthole. The high resistance of this type of explosive to dynamic desensitisation makes it suitable for use in tunnelling and shaft sinking in Himalayan conditions.