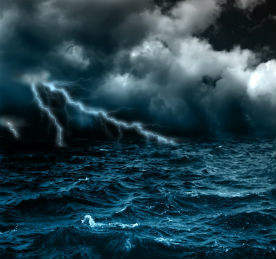 Even though controlling the weather may still be something only Wilhelm Reich can dream of, better predictive technology could be a boon for those working offshore, allowing them to make much better use of windows of fair weather. Cloudbusters need not apply.

E&P processes have evolved a great deal over the decades, overcoming, or at least delaying, the decline of mature reserves, and keeping pace with the world’s insatiable appetite for fossil fuels. Technological advances have turned the industry over the last century from ‘drill and hope’ to one of the most efficient extractive industries on the planet. Technology can only do so much, though. One of the biggest inefficiencies working offshore that is still beyond the taming influence of technology is the weather. Less-than-ideal conditions can severely hamper much of the work carried out by floating vessels. In the UK, adverse weather can limit work on floating vessels 65km or so from shore to 200 days in an average year.

Motion on the ocean
Specifically, waves can cause a number of problems for vessels working at sea.
"Think of the installation of PLEM/PLETs, where, due to crane vessel motions, the impact load due to touch down on the seabed can cause damage," explains Peter Naaijen, from Delft University of Technology, who is currently undertaking research into the prediction of wave-induced vessel motion. "Offloading operations from floating craft where, after lift-off, recollision of the load with the vessel is a risk. Helicopters landing on floating vessels is another example."

To minimise the chances of any of these eventualities, the university is currently co-funding the ‘PROMISED Operations’ (prediction of wave- induced motions and forces in ship, offshore and dredging operations) research project, along with the Dutch Ministry of Economic Affairs, Agriculture and Innovation, the University of Twente, Maritime Research Institute Netherlands, Ocean Waves, Allseas, Heerema Marine Contractors and IHC.

Operations at sea are dictated by a number of statistical parameters, such as wave height and probability of impact loads. If any of these fall outside of defined parameters, workers must down tools until the weather improves, but Naaijen argues that this approach wastes time.

"From a statistical standpoint, even within conditions that are considered unworkable, there may be windows of opportunity in which vessel motion is below critical values," he contends. "Being able to predict these quiescent periods in which vessel motion is at a minimum makes it is possible to time the critical part of an operation. We call this a shift from a statistical to a deterministic approach to operability."

This allows small windows of opportunity for work to be carried out, even in unfavourable conditions. Working in such tight timeframes requires extremely accurate prediction of vessel motion, though.

From a statistical standpoint, even within conditions that are considered unworkable, there may be windows of opportunity in which vessel motion is below critical values.

Swell guy
By using x-band nautical radar, it is possible to observe waves at a distance of 1,500-2,000m. Although designed to track other vessels in the area, it is possible to derive wave patterns from the unfiltered images. These can be used to initialise a wave-propagation model and predict lulls in swell, and, therefore, vessel motion.

"A prediction of the waves arriving at the vessel is obtained anywhere from tens of seconds to three minutes in advance, depending on conditions and radar range. Conventional methods are used to translate wave forecasts into ship motion predictions and pre-calculated responses of the vessel to the conditions are used."

The leap from seconds-in-advance prediction to real-time prediction may seem like a small one, but analysing radar images at such a rate can be a cumbersome endeavour. "This is the bottleneck of the whole prediction system," confirms Naaijen. "Techniques that use nautical radar to observe waves mainly aim to detect surface current and water depth – both of which can be derived from wave patterns – and eventually directional energy density spectra of the waves. In the current research project, we use improved methods that are more suitable for detecting the individual waves, thus enabling more accurate, real-time prediction."

Going beyond conventional technology has allowed this final hurdle to be overcome, but the work doesn’t stop there.

"More accurate observation systems are likely to emerge in the future, and this is the most important ingredient for enhanced accuracy of prediction" says Naaijen. Just improving the technology behind prediction is not enough, though: "A lot can be gained in efficient communication and presenting predictions to users," he continues. "Sharing the exact relevant information with a helicopter pilot, or between different vessels involved in an operation, is crucial for successful use of prediction systems."

It must be an effective marriage of technology and its users to really weather the storm.