SSE pushes ahead with Ferrybridge Multifuel 2

SSE reports that it has taken a final investment decision to proceed with the 70 MWe Ferrybridge Multifuel 2 (FM2) energy-from-waste project in West Yorkshire, UK. Construction is due to begin later this year, with first waste fire expected in 2018. 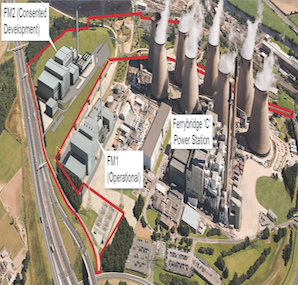 The facility, which represents an investment of about £360 million, was awarded planning consent in October 2015 and will be built next to the recently completed FM1 project, on land at Ferrybridge C power station.

An EPC contract has been signed with Hitachi Zosen Inova (HZI), the Swiss headquartered company that specialises in energy-from-waste projects, which was also the main EPC contractor for the neighbouring FM1 plant.

The FM2 contract came into force on 30 June 2016. “HZI proved itself to be an exceptionally constructive and reliable partner in the realisation of FM1. We therefore have absolute confidence in working with them again,” said Charlie Cryans, head of construction for SSE, UK and Ireland.

FM2 will be HZI’s ninth energy-from- waste project in the UK. The company notes that FM1 and FM2 together, with a total of four lines, one boiler per line, will comprise one of Europe’s largest and most efficient energy from waste facilities.

With a boiler capacity of 2 x 117.4 MWt (serving one steam turbine), FM2 will be very similar in design to FM1 and will achieve the same level of net efficiency, around 31%, as its sister plant, according to HZI, and indeed “achieving these values was one of the criteria for HZI securing this project”, the company says.

With FM2, HZI is aiming to build on the good operational experience with FM1, while learning from the earlier project, focusing on achieving maximum simplicity and utmost safety of civil works. In particular HZI says there will be a greater modularisation, enabling more pre-fabrication and pre-assembly, making the site working environment safer and site work processes easier to handle, resulting in reduced risks for all parties involved.

FM2 will handle around 570 000 tonnes per year of waste-derived fuel of various types such as municipal solid waste, commercial and industrial waste and waste wood.