San Fernando: a case in history

Canadian company Geo-Slope International demonstrates the capabilities of its software products using the historical context of the San Fernando earthquake in California. 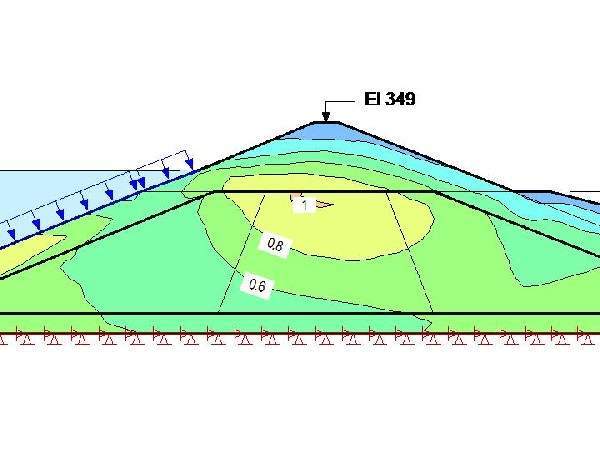 San Fernando earthquake is noted down in history as one of Southern California’s significant seismic events. Measuring a magnitude of 6.6 on the Richter scale, it occurred on 9 February 1971 and created a liquefaction failure at the Lower San Fernando dam and reservoir on the northern edge of the greater metropolitan Los Angeles area.
The earthquake shaking initiated a major failure on the upstream side of the dam and was perilously close to a catastrophe. A very steep slide head scarp and marginal freeboard remained after the event. Had the head scarp been slightly lower, the outflow from the reservoir would have quickly eroded the dam and flooded many communities downstream. Considering the extremely precarious situation, some 80,000 people over an area of 28.5km2 were evacuated while the reservoir was emptied over a period of three to four days.
San Fernando dam has become an important case history for geotechnical earthquake engineering. Due to its significance, the case has become the subject of years of research and numerous publications. Much of the early work was carried out by professor H Bolton Seed and his colleagues from the University of California at Berkley throughout 1975.
In light of this, Canadian software company Geo-Slope International has been keen to show how its products can be used to analyse such a case. The purpose was not to replicate all that has already been done or to necessarily adopt the exact conditions presented by others, but to illustrate the features and capabilities of the company’s suite of GeoStudio software products in the context of a famous case history.

There is strong evidence that the major slide movements did not start until after the strong earthquake shaking. Seed et al note that the slide probably did not occur until near or just after the end of the stronger earthquake motions. The significance of this is that the inertial forces (mass times acceleration) had already vanished by the time the slide movement started. This being the case, the cause of the slide was the excess pore-pressures and the associated strength loss – not the inertial forces.
The post-earthquake conditions can be taken into SIGMA/W to do a stress re-distribution. Clearly some zones were over-stressed after the earthquake due to the strength loss. With SIGMA/W, it is possible to attempt to re-distribute the stresses in the over-stressed zones. Such a stress re-distribution generally is accompanied with deformations, especially when the overall structure approaches the point of limiting equilibrium. In this case it has already been shown that the structure was past the point of limiting equilibrium, but a stress re-distribution analysis can nonetheless provide some information about the failure mechanisms.
Figure 5 shows the displacement vectors from the post-earthquake SIGMA/W stress re-distribution. The movements seem to be a reasonable approximation of what happened as the movement started. In the crest area the start of the movement is close to where the head scarp was and the movements are downward at a steep angle, which is consistent with the actual head scarp. On the left side, much of the movement is more or less horizontal, which is also consistent with the observations presented in the published literature.
This analysis of the Lower San Fernando Dam case history demonstrates the advantages of product integration within the GeoStudio suite. Many of the material properties used in this analysis are simple estimates but are adequate for understanding the key issues and mechanisms. This is also true for any project. It is good modelling practice to first use realistic estimates of material properties to obtain an understanding of key issues. Then a decision can be made as to where additional efforts and resources should be spent on further field investigations and testing.

A full-length technical article by GeoSlope can be found on the company website at www.geo-slope.com

San Fernando dam update
Damage from the San Fernando earthquake meant that a replacement dam was needed. The US Geological Survey (USGS) recommended the new dam be designed to withstand shaking about three times stronger than that assumed in design studies prior to USGS consultation.
The new US$33M Los Angeles dam was built in 1975-76 up the valley from the old Lower San Fernando dam. The old dam was not dismantled but reconstructed ( not to USGS shaking estimates) to provide a holding basin for storm water and to back up the new dam.
Two decades later, the 1994 Northridge earthquake put the Los Angeles dam to the test. The Northridge earthquake was almost equal in magnitude to the previous San Fernando earthquake. Ground shaking was very strong, with amplitudes among the highest ever recorded but consistent with the USGS estimates. Yet the dam showed only minor deformation and superficial cracking. Despite the intense shaking, the crest of the dam moved only 2.5cm sideways and settled only 8.9cm. In contrast, the Lower San Fernando dam again suffered heavily. Cracking and movement seriously damaged the upstream slope. Had the old dam been holding as much water as it had in 1971, the damage would have been far greater–at least equaling that from the 1971 earthquake.
Source: Robert A. Page, David M. Boore and Robert F. Yerkes. www.usgs.gov