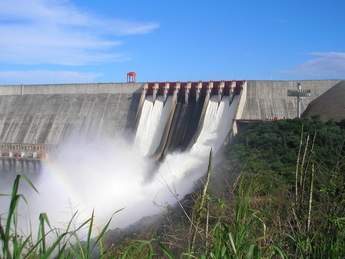 The 10,235MW capacity Guri hydroelectric power station in Venezuela is one of the world’s largest hydroelectric power generation schemes. Officially know as Central Hidroeléctrica Simón Bolívar, it was built in the state of Bolivar to dam the River Caroni across the Necuima Canyon, about 100km upstream with its confluence with the River Orinoco, one of the longest rivers in South America. The scheme’s 20 turbines, equally split in two separate powerhouses, have an annual generating capacity of 47,000GWh and account for around 70% of Venezuela’s power requirements.

Guri went on stream in 1978, but the original 2935MW power station was expanded in 1986 to its current capacity, creating a reservoir covering 4,250km2. The height of the combined concrete gravity and earth embankment dam was raised to 162m and crest length increased to 7,426m. Steel gates on top of the concrete section of the dam control overflow from the reservoir down three huge adjacent spillway channels, which have a combined flow capacity of 27,000m3/sec.

The surfaces on parts of the spillway needed repairing and the Venezuelan government’s power station owner and operator, Corporación Eléctrica Nacional, awarded a contract for the spillway renovation to the local general and civil engineering contractor Fapco C.A. based in Puerto Ordaz, Bolivar. The dam spillways have been in operation for over 30 years and the force of the fast flowing water and continuous exposure to the sun light and the environment have combined to erode the surface with caving and loosening of the concrete.

Fapco proposed the hydrodemolition technique of using high pressure water jetting to selectively remove only the weakened and damaged sections of the concrete spillway, and leave a very rough surface for bonding on the fresh concrete. Pneumatic breakers would leave fractures and micro cracking in the undamaged concrete left in place. Fapco worked closely with Conjet AB, manufacturer of hydrodemolition equipment, and the Swedish company’s hydrodemolition proposal was accepted by Corporación Eléctrica Nacional.

“One of Fapco’s engineers came to our head office and factory in Sweden to assess our equipment and our suggestion to perform the Guri dam spillway repairs,” says Conjet AB executive vice president Lars Göran Nilsson. “We worked closely with Fapco and recommended using a Conjet Robot 364 operating on a purpose built working platform rolling up and down the steep face of the spillway. Fapco adopted and adapted our suggestion and bought a Robot 364 specifically for the spillway repairs and designed and built the platform for it to work from.”

“The Conjet Robot was bought specifically for repairing the spillways and was operated from a platform specially designed for the geometry and slope of the spillway channels, which have an average slope of 51°,” says Fapco project engineer Yerry Cabrera. “Conjet gave Fapco some preliminary ideas about the access platform, which was then designed and fabricated by Fapco. The platform was moved by four manually controlled winches mounted on the crest of the dam, and this combination of the platform and Robot worked very well.”

Fapco had to completely repair one channel and perform partial repairs to another, covering a total area of about 7,500 m2. The Robot 364, operating at water pressures up to 1200 bar, selectively removed the weakened and damaged concrete from the spillway surfaces to depths ranging from 20 mm to 150 mm and in some instances exposing the steel reinforcement. Concrete removal was up to 69 m2/day and was intermittent due to a combination of moving the platform, adjusting the Robot to the spillway geometry and refilling the water tank supplying the Robot. After concrete removal Fapco followed on with a spray applied 800 kN/m2 strength mortar in areas less than 100 mm deep and 500 kN/m2 strength concrete in the deeper areas.

Fapco started on repairs to the first spillway in late 2009 and completed its contract in May 2011. Work on the project had to stop several times for several months, during the rainy seasons, when the spillway channels, not being repaired, had to be opened to control the level of the reservoir.

“We have had a very good experience with the Conjet Robot on the spillway and also used it for some hydrodemolition work on other areas, such as the water intakes of some of the generation units,” says Yerry Cabrera. “There is also potential work for repairing another spillway, and possibly some repairs on another dam.”