Gasketed plate heat exchangers offer space savings and maintenance benefits in nuclear cooling systems, but pressure and temperature limitations restricted them to secondary cooling systems. A new design can be used in the primary circuit. By Masanao Moriwaki and Kiyoshi Ishihama 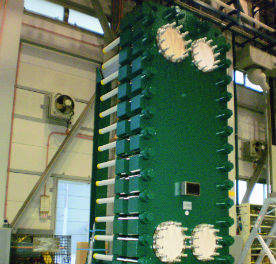 Despite these benefits, gasketed plate heat exchangers have been limited to secondary cooling systems in nuclear plants, such as seawater and river-water cooling systems. This is due to the temperature limits of the gaskets and the pressure limits of the seals, which are about 150°C and 2.5MPa, respectively.
The recently developed "Hestia" gasketed plate heat exchanger is intended for higher temperature and pressure applications. Its demonstrated upper temperature and pressure limits are 250°C and 9.50MPa, respectively. This has been achieved through the development of a high-pressure-retaining plate and frame, as well as a heat and radiation-resistant gasket. As a result, Hestia can be used in nuclear island cooling systems, including the primary residual heat removal systems in both BWRs and PWRs. The capability of Hestia is shown in the graph, and its specifications are summarised in Table 1.

A Hestia heat exchanger may be employed in new-build, as replacement in existing plants, and to improve safety.

In new-build, the volume of a plant directly affects its construction cost, and the usual strategy of nuclear plant suppliers is to minimise the size of buildings, particularly the nuclear island. By employing gasketed plate exchangers in various cooling systems and in initial plant layout design, overall space can be optimised.

Not only is a traditional heat exchanger large in itself, it also requires a footprint twice its size to accommodate maintenance activities, such as shell and tube disassembly. In our estimation, a gasketed plate version requires one seventh of the footprint.

When replacing heat exchangers, the installation time for a gasketed version is shorter than for the traditional version. It is also more economical: in the long term the maintenance cost is lower, as weld inspection is no longer needed. This is particularly important for safety-related cooling systems, where in-service inspection is mandatory. Using Hestia, the inspection burden and dose to maintenance workers will be significantly reduced. In addition, saved space can be re-purposed, and as above increased capacity (e.g. for a power uprate) can be easily achieved by adding plates.

Since the Fukushima accident, safety enhancement measures such as additional cooling systems have been required by regulatory bodies or pursued voluntarily by utilities. Since this is an additional system, it must be back-fit into existing available space, placed in the limited space outside of the existing buildings or designed as a mobile system. We would argue that where site efficiency is key, gasketed plate heat exchangers are the most suitable option.

The diagram shows an example of a trailer-mounted mobile emergency cooling system delivered to a Japanese customer as a backup. In this case a conventional gasket heat exchanger was used for a low pressure and temperature secondary system. Hestia can similarly be mounted on a trailer and could be developed as a mobile emergency cooling system for high pressure and temperature systems.

Since Hestia has been specifically developed for use in the primary cooling system of BWR nuclear power plants, in addition to high pressure and temperature, it has been designed and proven to meet the demands of a nuclear environment.

Radiation resistance has been demonstrated for the event that Hestia has to work in an accident situation when it is used in the emergency cooling system.
It is resistant to corrosion caused by the hydrogen peroxide contained in a BWR’s, primary coolant. This was demonstrated with immersion tests.

In the case of a severe accident, the introduction of foreign materials, such as insulation, into Hestia must be shown to have little-to-no deleterious effect on Hestia’s cooling function. In a demonstration, no increase in pressure drop occurred within the postulated range of introduced foreign material. This suggests that even if foreign matter enters the coolant, Hestia’s cooling performance remains satisfactory.

Caesium iodide, created from a core meltdown, causes no deterioration of the gaskets.

The residual heat removal (RHR) system has a shutdown-cooling mode and Hestia must be used in this mode three times per year. The equipment structural integrity and the cooling function must be maintained despite thermal cycling. It has been demonstrated that the structural integrity is ensured under any condition and that the equipment satisfies functional requirements.

Since Hestia deals with the primary loop water, which is radioactive, extra attention must be paid to leak resistance. Hestia’s dual-gasket design ensures leak-tightness. A detection hole is between the inner and outer gaskets enables leakage from the inner gasket to be detected at an early stage (leak before break). This dual-gasket design also brings an extra benefit. In general, gaskets are degraded by the compounding effect of heat from inside and oxidation from outside. Since there is no overlapping of these two contributing factors on one gasket in the dual-gasket design, the lifetime of gaskets is extended to more than five years under the design conditions of the RHR system.

Seismic resistance is specifically required for safety-related equipment in the primary loop. Hestia’s seismic acceleration limit has been evaluated at approximately 4.5g, is three times higher than conventional GP Hx and sufficient to meet the seismic requirements for a majority of nuclear power plants. This value was a conservative one that was obtained assuming a structural damping factor of 1%, and a higher value would result if a high damping factor of the plate type (3-5%) were considered.