A 10.4km tunnel is being constructed to supply additional water from above Niagara Falls to Sir Adam Beck hydroelectric complex in Ontario, Canada 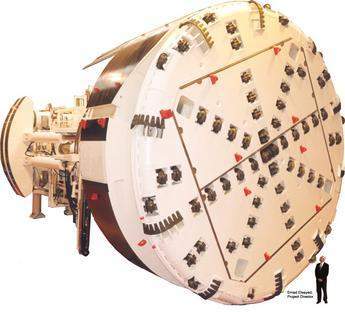 The 53km long Niagara river is an international waterway that forms part of the boundary between Canada and the US. It has an average flow of 6000m3/sec, and its flow is shared between the two North American countries as part of the 1950 Niagara Diversion Treaty, which establishes priority for scenic, domestic and navigation purposes, with the remaining river flow used for generating hydroelectricity. Roughly two thirds of the river’s average flow is utilised for power generation, with Canada and the US sharing equally.

Earlier in the year OPG completed a major renovation of the SAB2 generating station. The upgrade project, which began in 1996, added 194MW to Ontario’s electricity system. Some of the station’s older turbine-generator equipment was replaced with newer technology as part of a project that over the past nine years has seen all 16 generating units at SAB2 upgraded.

OPG has now gone a stage further – its sole shareholder the Ontario government has endorsed further upgrading and awarded Austrian company strabag AG a contract to design and construct a new 10.4km long tunnel to supply additional water from above Niagara Falls to SAB.

The Niagara Tunnel project was originally conceived in the 1980s, when OPG’s predecessor Ontario Hydro began to explore the possibility of harnessing more power at SAB. Preliminary engineering and environmental assessment took place for a proposed ‘Niagara River Hydroelectric Development’. Ontario’s Minister of the Environment in October 1998 approved an environmental assessment, effectively giving the green light.

Today, work is underway on the project that will involve boring a tunnel 14.4m in diameter at a depth of up to 140m below the city of Niagara Falls and the surrounding area. The tunnel will transport water along the Niagara Escarpment, supplying 500m3/sec of additional water to the power plant and enabling energy output from SAB to increase by an average of about 1.6TWh/yr.

• Cost of remedial work at the retired Ontario Power and Toronto power plants at Niagara Falls as part of their reversion to the Niagara Parks commission and agreement on the long-term disposition of water rights for use in the new tunnel.

• Cost of satisfying the conditions of the project’s Environmental Assessment approval.

• Cost of retaining an external consultant with international tunnelling experience as the owner’s representative to review/monitor the design and construction activities on OPG’s behalf.

• Cost of a comprehensive insurance programme.

OPG undertook an international process to select the successful contractor – three pre-qualified consortia submitted design/build proposals in May 2005 and, following review, the proposal from Strabag AG was selected. The Austrian company is supported by ILF Beratende Ingenieure of Austria; Morrison Hershfield of Toronto; Dufferin Construction of Oakville and several other local subcontractors. The Province of Ontario has committed to provide OPG with the required financing for the project.

The tunnel intake structure will be submerged and bell-mouthed in shape, located in the Niagara river beneath Bay 1 of the existing International Niagara Control Works (INCW) and an underwater approach channel that will be excavated in the river bed. There will be a portal in the intake structure with space for sectional gates for closing the tunnel at times when dewatering is necessary. The current ice accelerating wall, which extends from Pier 4 of the INCW works, will be removed and a similar structure built at Pier 5.

The tunnel outlet will be located near the SAB pump generating station, connected from the outlet structure to the existing SAB canal by a short rock canal. A closure gate will be installed at the outlet to allow the closure of the tunnel in the event of an emergency, or the need to dewater.

During its construction, the outlet canal will also be a staging launch site for the 14.4m diameter tunnel boring machine (TBM) from Robbins that will be used to construct the diversion tunnel. When tunnelling is complete, a rock plug will be removed to connect the outlet canal to the SAB canal.

Construction of the concrete-lined diversion tunnel, with measurements of 12.7m internal diameter and length approximately 10.4km, will proceed from the tunnel outlet to the intake area. The aforementioned TBM will be amongst the largest in the world (certainly bigger than any other in Ontario), and the new tunnel it will be used to build will follow the corridor of the existing tunnels that pass under the city of Niagara Falls.

About 80% of the total project construction spending is likely to be in Ontario. This includes construction labour, engineering and technical support, supply of construction equipment and other related services/materials. There is a preliminary construction schedule of four years, with construction at the intake expected to begin in early 2006. Tunnel excavation will follow in autumn the same year – this is due to the long lead-time required to build the TBM. When ready, the TBM will start tunnelling from the outlet, and should complete its journey to the intake by the end of 2008. Consequently, construction is expected to be completed by late 2009.