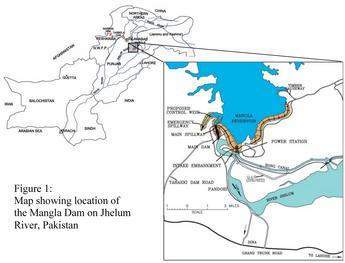 MANGLA DAM, located on the Jhelum river in Pakistan, was completed in 1967 with a gross storage capacity of 7.3Bm3. The main features of the project include an embankment with a maximum height of 138m and a total length of 13km, two spillways and a power house. The existing dam and other appurtenant structures were designed to allow for the future raising of the dam and concrete structures. However the integrity, durability and strength of the concrete needed to be evaluated before any modifications were undertaken.

Studies were completed on the old concrete, including: testing of concrete strength on cores; ultrasonic pulse velocity measurements; chloride and sulphate penetration; tests on concrete cover; reinforcement corrosion; pH of concrete and petrographic studies of concrete cores. All these studies demonstrate an insignificant aging effect without damages (MJV, 2004).

Strained quartz in many rocks is a reactive component of aggregates thought to be responsible for Alkali-Silicate / Silica Reaction ASSR (Charlwood and Solymar, 1994). This type of potential reaction has been found in many rocks in the Himalayan regions. The tectonically deformed rocks of the Himalayan region including granites, granodiorites, gneisses, quartzites and other metamorphosed rocks have reported delayed expansion and damage in concrete due to the presence of quartz with crystal lattice defects (i.e., strained quartz) (Wigam, 1995). Most of the major streams or their tributaries originating from igneous and metamorphic rocks and draining into Pakistan contain this type of material. A comprehensive study regarding the in-service performance of aggregates derived from one such stream – the Jhelum river – and and its use in Mangla dam is presented. In this paper no distinction is made between ASR and ASSR, and the term ASR has been used for both reactions.

ASR studies have historically not been carried out on existing concrete structures in Pakistan. However, in the past few years researchers have looked at this problem extensively in two dams in Pakistan. Warsak dam, located on Kabul river, has been badly affected by ASR (Chaudhry and Zaka, 1998) and has undergone major repair after a partial shut down of about two years.

At Tarbela dam, natural sand and gravel from the Indus riverbed was used in concrete after testing by petrographic, chemical and mortar bar method (TAM Report, WAPDA 1965). The results of the testing indicated that the aggregates were non-reactive and therefore were used with OPC of high alkalies. Twelve years after completion, ASR was reported on some of the structure. The ASR is reported due to the aggregate containing strained quartz and other rock types, especially meta-greywackes, containing mineral phases, which are slowly reactive (Chaudhry and Zaka, 1994).

Detailed ASR studies for the proposed Kalabagh dam on the Indus river were also carried out by Kalabagh Consultants in 1988.

Both the Warsak and Tarbela dams have been recorded in literature as cases containing ASSR (Charlwood and Solymar, 1994). The review of literature and completion report Vol. VIII titled Concrete Production and Control of Mangla by Binnie and Partners (1971) reveals that the aggregates used for concrete were evaluated and found harmless in petrographic and expansion bar tests.

Approximately 1.6Mm3 of concrete was placed in the original construction of Mangla dam. The main spillway constitutes about 50% of the total concrete placed. A summary of mix designs, material properties and methods of construction has been documented in the completion report by Binnie and Partner (1971).

Both coarse and fine concrete aggregates were obtained by processing and crushing gravel from the flood plains areas upstream and downstream of the main spillway. The deposits contained a mixture of sedimentary, metamorphic and igneous rocks.

The existing spillway has to be adjusted to the raised water level. For this the headwork wall and the sill has to be raised to allow for the gate orifices to limit the discharge under the raised head.

All other appurtenant structures of the main spillway will be left untouched as these were designed for the raised conditions, however to contain the reservoir to the normal conservation level, a control weir upstream of the existing emergency spillway will be constructed.

The studies of assessment of old concrete were confined to the headworks part of the spillway, where the new concrete is to be placed.

A condition survey was carried out on the spillway’s concrete, which consisted of subjecting the concrete to various exposure conditions including concrete in areas of permanent dryness with occasional wetting due to rain, humid environment such as in galleries, and areas subjected to alternate wetting and drying was carried out.

Hairline cracks, in some cases similar to pattern cracks, are present on the concrete surface. The cracks are rather short, interconnected and run in all directions. At the first sight these cracks seem to be related to shrinkage. Brownish coloured surfaces were also seen in the spillway chute area. Generally however the concrete is in good condition and shows no sign of distress.

The particular part of the structure where a humid environment exists, and one would expect ASR friendly conditions, are drainage galleries. As expected, the visual survey did not show signs of ASR here. However the presence of cracks in some areas received particular attention in relation to ASR and cores have been drawn along these cracks.

Petrographic studies were carried out in accordance with ASTM C-295. The modal composition of gravels from the Jhelum riverbed sandy gravel – from which the aggregate was extracted for original construction of Mangla – is given in table 3.

These studies revealed that aggregates derived from the Jhelum riverbed are potentially reactive in terms of ASR. The reactive constituents are mainly slow and late reactive forms of silica and consist mostly of quartzites, volcanics, granites, quartz wacke / greywackes, and slate / phyllite.

Study of asr in old concrete

Megascopic studies of 24 concrete cores were carried out by visual examination. Ten core samples were also analysed petrographically. In the first instance the cores’ exterior and interior were studied under low magnification and reported as megascopic evaluation of concrete cores as presented in table 6.

Three cores showed signs of ASR. The common feature of these three cores is that they have been extracted with the crack running parallel to the long axis of cores, so that the cores split into two halves after they are extracted from the concrete. One of these cores is shown in figure 2. Dark reaction rims around clasts can be easily recognised.

The possible reason for ASR in these cores is the sequence of occurrence of cracks and ASR initiation. It is interpreted that these cracks were perhaps formed as a result of other causes and later the ingress of water into these cracks provided localised environments conducive for the initiation of ASR.

Ten selected cores listed in table 6 were also examined under a polarizing microscope in thin sections. The study revealed that only the three cores discussed above indicate micro-cracks as shown in figure 3. These microcraks traverse aggregates as well as cement paste and were filled with secondary ASR products.

Many tests performed in the past to assess the reactivity of aggregates have proved unsuccessful in predicting the ASR potential of aggregates. None of these tests found universal acceptance and became obsolete over time. For example at Tarbela dam and the proposed Kalabagh dam, the ASTM C-289 and ASTM C-227 were conducted (TAMS Report, 1965 and Kalabagh Consultants Report, 1988). Both tests did not predict ASR potential of Indus river gravels. Likewise the mortar bars expansion test did not predict any AAR potential for aggregate used at Mangla dam.

Accelerated mortar bar test as per ASTM C-1260 has been accepted as reliable, quick and capable of characterising the potential reactivity of slowly reactive mineral phases.

The inference drawn from the above two petrographic analyses was further strengthened after conducting the mortar bar test on Jhelum riverbed gravels in accordance with ASTM C-1260. The average expansion of mortar bars reported after a period of 16 days was 0.25%. Aggregate showing this expansion value is regarded as deleterious in the concrete alkaline environment as per ASTM C-1260.

ASTM C-1260 test’s results imply that the aggregates are reactive and fully comply with the finding of petrographic examination conducted as per ASTM C-295.

The petrographic examination of the Jhelum riverbed material where the aggregates were taken for original construction revealed that the aggregates are reactive in terms of ASR. This inference is supported by conducting the most widely used accelerated mortar bar test ASTM C-1260 on this source.

However, the in-service performance of the aggregates in question does not correlate with the laboratory results. The forced reaction and resulting expansion of concrete can only indicate the potential of an aggregate for reaction under adverse conditions and not necessarily its behaviour under service conditions (Shayan, 1992). Under these circumstances conflicts may arise either to curb ASR or not in concrete, when the field performance of very old concrete show expansion free behaviour and the expansion tests results suggest a high degree of risk.

To cope with this adversity of simulated conditions in ASTM C-1260 which are usually beyond the exposure conditions of concrete, the engineering practice also requires some other tests which should be capable of simulating somewhat more realistic in-service conditions.

The ASTM C-1293 concrete prim test (CPT) appears more realistic and less conservative than the accelerated mortar bar test (Malvar et.al., 2002). This test in many respects is more realistic in simulating the in-service conditions of concrete. Time permitting, it is suggested that this test should be conducted as well.