The week-long RCC Dams Seminar and Study Tour attracted an international audience to Atlanta and demonstrated the importance of sharing lessons learned from the past, while presenting the latest developments in RCC dam design and construction 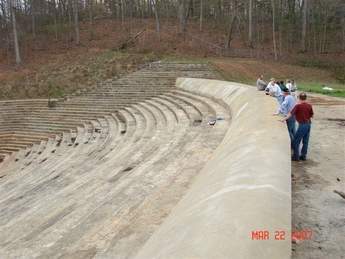 Tours of dam projects that use roller compacted concrete (RCC) were a major feature of the week-long International RCC Dams Seminar and Study Tour(RCC 2007) held in March in Atlanta, US. Interest in the use of RCC in dams was evidenced by an overflow attendance of 63 from 14 nations on five continents. Countries represented were as diverse as Australia, Bolivia, Canada, Germany, India, Italy, Korea, New Zealand, Algeria, Panama, Portugal, Puerto Rico (US), Spain, Vietnam, as well as the US itself.

Sponsor of the course was Schnabel Engineering in conjunction with the Association of State Dam Safety Officials (ASDSO). This was the second time the structured course on the design and construction of RCC dams and RCC for dam rehabilitation was held in Atlanta. Three previous offerings were conducted in Denver on a bi-yearly basis.

Designed by Schnabel Engineering, the 300m long dam will provide an additional water source for two fast growing suburbs of Atlanta, Cobb County and the City of Canton. The RCC gravity dam is the tallest RCC dam presently under construction in the US and when completed will be the highest non-federal dam in the state of Georgia. Hickory Log Creek dam is the only RCC dam, out of the 44 in the US, with crest gates and the first major use of exposed grout-enriched RCC (GERCC) in the country. GERCC is being used for the downstream steps in the non-overflow portions of the dam’s downstream face. Membrane faced precast concrete panels provide an impermeable upstream face for the RCC structure.

Thalle Construction Company is the prime contractor for the dam which will require 176,000m3 of RCC when completed. Key subcontractors are ASI Constructors for RCC mixing and laydown, as well as ROTEC for supplying the conveyor system and a unique RCC spreader. The spreader with a steel roof overhead can be seen in Figure 1. RCC is being placed in two-nine hour shifts. The RCC placement rate has exceeded 3500m3 in one day on several occasions. RCC placement was expected to be completed in late May. The ogee crest section constructed of self-consolidating concrete and Obermeyer crest gates will then be installed.

Other projects visited during the study tour were the Big Haynes RCC dam and two RCC overtopping protection projects in the Yellow river watershed in Gwinnett County. Big Haynes is a 27m high water supply dam at Conyers, Georgia, another suburb of Atlanta. It was completed in 1995 using an exposed lean RCC mixture. However, the 107m wide spillway was constructed using precast concrete column sections anchored back into the RCC (Figure 2). When the project was visited by the attendees of RCC 2004, a depth of more than 300mm of flow was cascading down the stepped spillway (Figure 3). The overflow was caused by heavy rains generated by Hurricane Ivan and is the only time the spillway has operated.

At Yellow river site 14(Y14) overtopping protection project, formed 0.6m steps of exposed RCC were used for both hydraulic and aesthetic reasons. The RCC overlay was not only placed on the downstream slope of the embankment, but also adjacent to each abutment. In this manner, the spillway capacity is increased and the dam could be safely overtopped during a flood. The design also included a curved ogee crest control section and together with the RCC abutment protection served to produce a converging stepped spillway (Figure 4).

For the Y17 dam rehabilitation project, the RCC was only exposed at the crest. The remainder of the RCC overlay was covered with top soil and grassed (Figure 5). This was desired as the dam is located in a suburban park setting. When the structure is overtopped for the 1 in 100 flood event, the grass cover could erode, leaving the RCC to protect the dam from failure. Both of these hydraulic upgrades were required due to an increase in dam hazard classification necessitated by an extensive housing development that occurred downstream after the dams were built 40 to 50 years ago.

At the seminar, seventeen speakers from the US, Australia, Germany, Spain and Canada presented lessons learned from past performance and the state-of-the-art in the design and construction of RCC. RCC dams continue to be built higher with several approaching 200m in height, with some planned even higher. Most of the high RCC dams are located in southeast Asia. Shear resistance and direct tensile strength at lift lines continue to be the major item to be solved in design of the high RCC dams, especially in earthquake prone areas.

Brian Forbes from Australia presented methods for improving cohesion between successive layers including bedding mortars, rapid placement including the sloping layer method developed in China and excess paste RCC mixtures. None of the speakers at the seminar favoured lean/dry mixes for high RCC dams.

The use of grout-enriched RCC for both faces of a gravity dam as well as for a positive dam abutment contact was emphasised at the seminar. However, a slight disagreement occurred between the GERCC method where grout is applied to the surface of the newly placed RCC and grout enriched vibrated concrete (GEVR) method. In the latter case, the grout is placed prior to spreading the RCC above. In both cases the grout is vibrated into the no-slump RCC to produce a mixed-in-place conventional slump concrete facing. Brian Forbes presented the case for GERCC, while Francisco Ortega, a Spaniard living in Germany, was the proponent for GEVR. It seems GEVR works better with wetter RCC mixes as determined by lower Vebe consistency times.

Lesson learned from case studies of RCC dams in service or planned was well received by the seminar attendees. Ken Hansen’s lecture on what has been learned from 25 years of experience with RCC dams in the US gave credit to the pioneering designers for these dams, while pointing out what was learned from a few items needing improvement.

There was considerable focus and participation in the course by major RCC dam contractors such as ASI Constructors, Barnard Construction, Thalle Construction, Kiewit Southern, Heeter Construction and Estes Brothers from the US, as well as Dragados from Spain and Astaldi from Italy. A forum consisting of one design engineer and two contractors presented means for trying to control the recent increases in cost for constructing dams of all types, with special emphasis on RCC dams. Several social events also enhanced the programme including an outdoor barbecue dinner complete with a bluegrass band.

The number of mainly earth dams rehabilitated using RCC is now nearly 100 in the US. The main application has been to apply an RCC overlay on the downstream slope of an existing embankment that has been determined to have inadequate spillway capacity.(See Figure 4 &5)

In this manner, flood flows are safely taken over the dam thus keeping the dam from failing due to overtopping by an infrequent flood event. Considerable attention was given to this subject in the seminar, as well as the study tour, with Randy Bass, Chuck Kahler, and Ken Hansen covering the design, construction and quality control for RCC overtopping protection at the seminar.

The next International RCC Dams Seminar and Study Tour is scheduled to be held in 2009. For further information contact Randy Bass or Ken Hansen by email: rbass@schnabel-eng.com or khansen@schnabel-eng.com