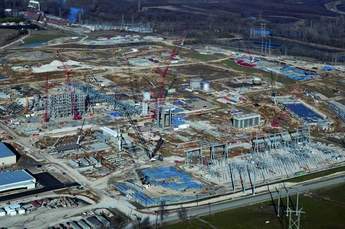 This year’s Gasification Technologies Conference was held in Colorado Springs because of the need to accommodate a larger attendance than its original San Francisco home could host. Obviously there was some concern that the economic turndown would reduce the forecast numbers, but with an attendance of some 750 it seems that there is still plenty of confidence in the ability of this technology to contribute to addressing the energy conversion needs of the future even if funding difficulties are limiting the number of projects going ahead at the moment.

Overall project progress as of 1 September 2009 was 40% with 25% construction completion. Most of the underground work, excavation and backfill, piling and underground piping, is complete. Work has started on the first structural steel. The radiant coolers, which generate high pressure steam from the hot gas leaving the GE gasifiers, have been delivered to site and are being welded together. Substantial completion of construction is planned for June 2012.

The Edwardsport 630 MWe IGCC plant will be replacing an existing 120 MWe unit at the location. The new plant will emit less sulphur dioxide, nitrogen oxide and mercury than the old plant. Due to the plant’s superior efficiency, it also will emit 45% less carbon dioxide per megawatt-hour than the existing facility.

The new plant as currently being constructed does not include any carbon capture although provision has been made for retrofitting. Studies on adding carbon capture and storage are underway and an application has been filed for a detailed characterisation of potential storage sites that include deep saline aquifers, depleted oil or gas fields and enhanced oil recovery.

Gasification based demonstration projects for carbon capture and storage (CCS) employ a singularly similar range of names, FutureGen, ZeroGen, GreenGen, UltraGen, HypoGen, and the like. Some of these projects have had a turbulent start and the conference included updates on three of them.

The “rebirth” of the FutureGen project gave rise to an interesting paper. This project had been conceived in 2003 as a US government sponsored CCS demonstration project based on IGCC technology at the 275 MWe scale and operating at a carbon dioxide storage rate of at least 1 million t/a. Provision was to be made for testing advanced technologies beyond those currently available. A consortium of power and coal companies made up the industrial alliance to partner the US Department of Energy (DoE) in the project. A preliminary screening process narrowed the siting down to four locations, in Texas and Illinois. A selection study which included a very thorough analysis of the issues of CO2 transport and storage (publicly available on the internet) finally settled on Mattoon, Illinois, as the chosen site in late 2007. Within weeks of this decision, the DoE pulled out of the project on grounds of cost and announced a totally new strategy for supporting CCS. The new administration in Washington has revived the plan. The project claims to be 3-5 years ahead of other CCS efforts, largely on the basis of its siting selection and the clarification of all legal issues associated with the transport and storage issues, which were settled by State legislation prior to the 2007 interruption. And when one looks at the difficulties some other proposals are facing in that area, the basis of the claim is understandable. The Alliance has conducted a value engineering exercise to address the cost issues and a revised budget has been completed. The project will retain the original philosophy of being able to provide tie-ins for future R&D facilities for advanced technologies. Inquiries have been released for the gasification section and mechanical completion is planned for mid-2014.

Australia’s ZeroGen project located at next to a Stanwell PC unit in Queensland was originally conceived as a two stage project. Stage I was to be a 120 MWe gross plant based on a 6F gas turbine and a Shell gasifier with 75% capture and storage. Stage II would be a 450 MWe gross unit with up to 90% capture to be started up in 2017. The feasibility studies for Stage I showed that there was no chance of supporting the economics of CCS at the smaller scale and the result has been a decision to go straight to Stage II without the smaller plant. Work on Stage II has led to the selection of a Mitsubishi Heavy Industries (MHI) air-blown gasifier with a MHI gas turbine in a total-wrap concept. The resulting plant size is 530 MWe gross output. The plant is to be designed for about 90% capture, though the initial operation is expected to be about 65%. The CO2 will be transported by pipeline under supercritical conditions to the Denison trough. A number of sites for the power plant are currently under investigation and selection will depend at least in part on the evaluation of the storage site.

GreenGen is China’s contribution to IGCC+CCS demonstration. The project is to be located close to Tianjin. It will use TPRI’s two-stage dry-feed oxygen-blown gasifier. Stage I will be a conventional 250 MWe IGCC and polygeneration unit, which is already under construction and is due to be taken on stream in 2011. In the following two years, this will be upgraded to produce hydrogen for a fuel cell power application and CCS. The final stage will build on this experience and will include a 400 MWe power plant with CCS and power production from both a hydrogen-fired gas turbine and fuel cells. This final stage of the project is planned for implementation in 2014-2017.

One of the technological highlights of the conference was Siemens’ announcement that its 1200 MWt coal gasifier is now available for sale. This brings Siemens’ designs to the same size range as GE and Shell with the capability of pairing a single gasifier with one advanced F-class gas turbine. The gasifier will be capable of a feed rate of 3500-4000 t/d of hard coal or petroleum coke. The three burner down flow arrangement, which was demonstrated in the 200 MWt Schwarze Pumpe plant, will provide a good turndown capability. Other key features of the Siemens design such as the dry feed, the cooling screen wall and the full quench currently used in the five 500 MWt units due for start up in China in the course of 2010 have been retained.

One other interesting technology announce-ment was that MHI has been conducting tests at the pilot plant in Nagasaki in an oxygen-blown mode during the last year or two and is now ready to market an oxygen-blown version of their gasifier for use in the chemicals and synthetic fuels markets. While no one has doubted the capability of MHI to produce such a unit, this is the first time that this author has seen such an announcement in public. The oxygen-blown gasifier will retain the dry-feed two-stage configuration of the air-blown gasifier as well as the close coupled steam raising syngas cooler and the company is pursuing three projects with this design. Feed rates of 3500-4000 t/d coal are foreseen for this gasifier.

For the power market, however, MHI will continue to offer the air-blown version as currently being operated at the 250 MWe Nakoso plant.

All in all, the conference showed continuing progress despite the general economic turn down.

The full presentations are available from www.gasification.org.