As FERC moves on hydrokinetic energy licensing in the US, it has also given a greenlight to Finavera to push ahead with an AquaBuOY project at Washington state, reports Neil Ford 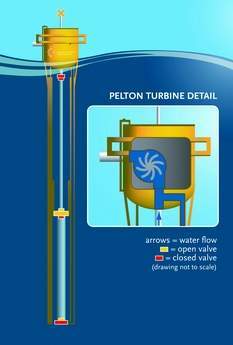 Finavera Renewables Ocean Energy Ltd has been awarded the first licence in the US for a hydrokinetic energy project. At the end of 2007, the Federal Energy Regulatory Commission (FERC) awarded the licence for the company’s proposed 1MW Makah Bay Offshore Wave Pilot Project, which is to be located approximately 3.5km off the coast of Washington state. FERC approved the project just weeks after launching a streamlined application procedure for hydrokinetic energy ventures, aimed at boosting the nascent hydropower sector, though it was not the method used to assess Makah Bay.

Chief executive officer of parent company Finavera Renewables, Inc., Jason Bak, said that the Makah Bay project is designed to demonstrate both the technological and commercial viability of its AquaBuOY wave energy system, and welcomed the licensing approval from FERC as “a tremendous step forward for the development of wave energy in the United States”.

Chairman of FERC, Joseph Kelliher, said hydrokinetic projects have “tremendous potential” and that the licence award for the pilot project to demonstrate the wave energy conversion technology was a “major step” towards realising that potential. He added that FERC had introduced a flexible hydrokinetic policy to enable projects to be developed as quickly as possible.

Philip Moeller, a FERC Commissioner, described the licence award as “historic”, and said: “Consumers are demanding more renewable energy options, especially those sources that are domestic, renewable, and carbon free.”

He added that the Makah Bay project meets these criteria and also demonstrates FERC’s “proactive approach to enable the development of this and other sources of hydropower”.

The original licensing application process with FERC in November 2006 and the subsequent five-year licence enables the company to begin project development. However, it also requires the company to secure a series of federal and state permits before it can start construction work, which must commence within two years and be completed within three years from award of the licence, ie., by late 2010. Hopeful of securing the required approvals, Finavera already has a power purchase agreement (PPA) in place for the scheme.

The Makah Bay project is being developed by the wholly-owned US subsidiary of Vancouver-based Finavera Renewables, Inc., and the site was selected for a number of reasons, including: favourable climate; the depth of the water close to the shore; demand for electricity among the area’s coastal communities; the proximity of a transmission line; and, the interest of the Makah Indian Nation in the venture. The involvement of Aboriginal American communities in hydroelectric schemes in Canada and the US has received a great deal of coverage in recent years and so it is no surprise that the Makah Indian Nation, which owns the land portion of the project, is involved in the Makah Bay scheme.

Finavera has also secured the support of a large number of other partners for its project, including Energy Northwest, Puget Sound Energy and Washington State University.

The centrepiece of Finavera Renewables’ hydrokinetic ambitions is its AquaBuOY technology, and the company aims to develop clusters of these patented wave energy converters at various sites around the world, locating them several kilometres offshore to make the most of wave energy potential. In the devices, energy transfer takes place by the kinetic energy of sea waves being translated into pressurised water in a closed-loop freshwater system by using two-stroke hose pumps. The pressurised water is then directed into a conversion system that consists of a Pelton turbine and generator. In each case, electricity would then be transmitted to the shore via a subsea transmission line.

The devices have two sections – the surface float and underwater acceleration tube portions. In terms of size, the Makah Bay units will see the former section having a diameter of 6m, height of 5m and the unit will extend about 2m above the ocean surface, somewhat like the large navigation aids in shipping lanes. The underwater acceleration tube section will have a diameter of 4.6m, a length of 30m and each of the two hose pumps will be 10.75m long. The section’s pressurised tubes will have internal diameters of 40.6cm-45.6cm and there will be two return tubes. Finavera plans to use its AquaBuOYs to provide generating capacity ranging from hundreds of kilowatts to hundreds of megawatts.

However, as with most research and development work, tests of the new technology have had glitches in some aspects. In November 2007, one version of the hydrokinetic technology, the AquaBuOY 2.0, suffered a setback when the 40tonnes, US$2M buoy being tested off the coast of Lincoln County, Oregon, sank just one day before it was due to be removed the test site. While the company had achieved the trial results sought, it says that the cause of the sinking was not yet known although it suspected a link to the float section of the device rather than the power generating component.

Finavera Renewables’ vice president for business development, Kevin Bannister, commented that for the purpose of the project, the test was seen as “highly successful”, as the data recovered supported all the modelling work carried out to date. A company spokesperson added that the test buoy had been only designed for three months of use, rather than long-term application in a commercial environment.

Therefore, the firm does not expect the sinking to impact on the deployment of AquaBuOY at Makah Bay. It is now developing AquaBuOY 3.0 using the detailed information collected from the Oregon test buoy, but it is not yet known which version of the AquaBuOY system will be utilised for the project.

The Makah Bay project, located off Waatch Point in Clallam County, near the city of Neah Bay, will include four 250kW steel wave energy conversion buoys (approximately 18.5m apart in a line somewhat parallel to wave fronts) and associated anchoring, mooring and transmission infrastructure. The devices are to be connected to a shore station by a 6km transmission cable, while another 12kV transmission link will connect the shore station to the existing county distribution grid to enable electricity to be supplied to local consumers. The project is expected to generate 1,500MWh per year, sufficient to supply all the electricity required by 150 homes in Neah Bay.

Under the FERC licence, the company is required to include measures to mitigate the environmental impact of the venture. Apart from the obvious navigation and safety plans, the mitigation measures include ensuring that the subsea transmission cable is free of debris by regular monitoring, and development of an anchoring plan for the cable. Noise from the scheme must also be monitored and an assessment of the impact on marine mammals is required. In addition, the intensity of the electromagnetic field created by the transmission line and electrical cables must be examined as part of the licensing conditions. FERC is permitted to revoke the licence if the project is found to “unacceptably affect” the local environment.

With the newly introduced changes to the approvals process introduced by FERC, the investment regime for hydrokinetic energy projects now more closely mirrors its approach to the rest of the energy sector, it says. In a policy statement, FERC said that issuing conditional licences for hydrokinetic technologies would have no environmental impact, would not diminish the authority of states or federal agencies, and yet should improve the ability of project developers to secure the financing of demonstration projects.

FERC now aims to complete licensing processes for hydrokinetic energy project applications within six months. However, while pilot project licences will be made available for schemes that test new technologies, and are proposed with installed capacities of less than 5MW, other ventures will be required to apply for full commercial licences of 30-50 years. In fact, Finavera Renewables’ Makah Bay scheme was originally submitted as a 30-year licence application but in mid-2007 that was changed by the company to a requested five-year period.

Although estimates vary as to the size of the sector’s potential, it has been estimated by FERC that tidal, current and wave power projects could double the total amount of hydropower generating capacity in the US.

One project, in California, in recent months attracted a PPA with Pacific Gas and Electric (PG&E) for 3,854 MWh per year. The 2MW scheme, to be located 4km off the coast of Humboldt County in the north of the state, is due to come onstream in 2012.

The AquaBuOY 2.0 test off the coast of Oregon is part of preparations for a much larger, 100MW, scheme that is to be based off the coast of Coos County and which already has a preliminary permit from FERC. Finavera Renewables does not expect the loss of the buoy to affect development, although the lost model must be recovered from the sea bed sometime after the winter to determine the cause of the loss and therefore enable the venture to proceed.

The company also has a PPA with PG&E for a project at Humboldt County, California. The utility is also studying options for projects at Mendocino County.

Beyond the US, Finavera Renewables has a number of other hydrokinetic as well as wind power projects in development. Wave energy projects employing AquaBuOY technology are under development in Canada, Portugal and South Africa.

A preliminary permit was secured from the province of British Columbia for an AquaBuOY development off Ucluelet, on Vancouver Island. With an original phase of 5MW, the company hopes that the project can eventually be increased to 100MW.

Wave, tidal and current energy technologies have long been mooted as the next big thing in the hydropower sector and, indeed, arguably in the renewable power industry as a whole. A combination of high production costs, technological setbacks and limited investment in research and development have prevented a rising uptake of commercial projects.

Beyond its previous preliminary permitting process, FERC’s movement on hydrokinetic energy projects and the green light for Finavera’s Makah Bay venture are seen by it as significant steps for hydropower, and add to the list of various wave and tidal ventures being approved or pursued internationally. While prospects are in play for the beginnings of clusters of wave energy converters in the megawatt range, there are still a number of technological and regulatory hurdles to be overcome. Nonetheless, the age of hydrokinetic power now appears to be just a little closer.