Highview to add supercaps and flywheels to liquid air

Highview has been awarded funding of £1.5 million for a new hybrid configuration of its existing liquid air energy storage (LAES) system from Innovate UK, the UK’s innovation agency. 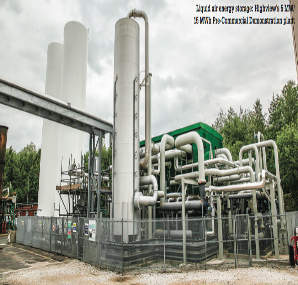 Highview has been awarded funding of £1.5 million for a new hybrid configuration of its existing liquid air energy storage (LAES) system from Innovate UK, the UK’s innovation agency.

Liquid Air Energy Storage is being developed as a large scale (up to 200 MW/1.2 GWh, and above), long duration storage technology. According to Gareth Brett, CEO of Highview, “the hybrid LAES system promises the powerful combination of instant start and long duration storage and is an important step for Highview as it broadens the range of services which LAES can supply and will help enhance the economic case for its adoption.”

The hybrid will be implemented at Highview’s 5 MW/15 MWh Pre-Commercial Demonstration plant at project partner Viridor’s Pilsworth landfill gas plant in Bury, Greater Manchester, UK. The Pre- Commercial Demonstation plant is currently in commissioning and due on-line early in 2018, following delays due to “component issues”.

Highview describes LAES as “proven technology” after construction of a 350 kW/2.5 MWh pilot plant in 2011, which was connected to the grid at SSE’s biomass plant in Slough until 2014.

In terms of scale Highview says LAES can be compared to technologies such as pumped hydro or compressed air energy storage (CAES), but “it does not require specific geography and can be located at the point of demand making it a very compelling solution.”

The aim of the hybrid LAES project is to test performance and economics and it is expected to be operational by summer 2018. At the end of 2013 Highview signed a global licencing and technology collaboration agreement, with GE Oil & Gas, to develop the integration of Highview’s LAES technology into its peaker plant offering.

The technology works by taking off peak or excess electricity and using it to turn air into a liquid by refrigerating it to minus 196°C and storing it in insulated tanks at low pressure. When power is required, liquid air is drawn from the tanks and pumped to high pressure. Heat harnessed from the liquefaction process is applied to the liquid air via heat exchangers and an intermediate heat transfer fluid. This produces a high-pressure gas in the form of air that is then used to drive a turbine and create electricity.