Despite many challenges, dose management of workers who engaged in emergency work during the Fukushima-Daiichi nuclear power station accident was maintained. By Koichi Sumiyoshi 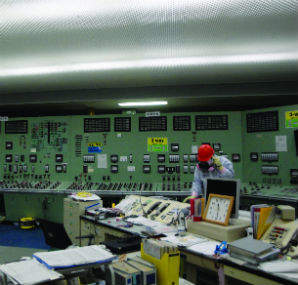 After the earthquake and tsunami, we had to restore power supply to cool the fuel in the reactor pressure vessels and spent fuel pools. We had cooperation of the self-defence forces and the fire department. Concrete rubble from the reactor building roofs was scattered by hydrogen explosions, and fire engines were not able to approach the reactor building. Self-defence forces removed them using heavy industrial machines. The goal was the continuation of the plant operation and restoration of instruments. We had a lot of work: fuel cooling, water treatment, radiological release reduction, improvement of working environment. Electric utilities and other organizations cooperated.

At first we were unable to use the radiation management system, and dose management was carried out by a lot of workers. Recovery work at Fukushima Daiichi amounted to about 22,000 worker-days until the end of May 2012. Almost all of the exposure was in the first year; since June 2011, no worker has had an external exposure greater than 50 mSv, through work environment improvement efforts. Up to May 2012, 66% of workers were under 10 mSv (external and internal exposure). There were 167 people with doses of greater than 100 mSv (TEPCO workers: 146, contractor workers: 21) (see Table 1).

In March 2011, the emergency short-term dose limit was raised from 100 mSv to 250 mSv. This category was for those who worked to maintain the function of reactor facility and spent fuel pool cooling where radiation doses exceed 0.1 mSv/hr, and who prevent the release of a huge amount of radioactive material due to problems or damage of a reactor facility. Target workers had to enrol in a labour standards supervision station before working. By December 2011, once release of radioactive material was under control, and TEPCO was able to significantly hold down radioactive dose, so the emergency dose limit was lowered to 100 mSv.
Those with a specialized skill had to get the permission of the Minister of Health, Labour and Welfare to continue to work in high-dose areas after having received 100 mSv of dose. (For technical workers, the 250 mSv dose limit remained until 30 April 2012.) A total of 45 workers, all from TEPCO, applied for this permission.
More recently, TEPCO checked the records of 3745 emergency workers. In total, 514 of them had contact information unknown to TEPCO. Most of these instances were caused by entry errors or mistakes. Data inspection reduced the number of unknown workers from 514 to 16. Of that 16, six had retired and didn’t respond, and ten couldn’t be confirmed. Later three were reached. On 16 December 2011, the names of 13 workers were publicized. Three more were reached. Then there were 10 workers with unknown contact information. No unknown workers appear after July 2011.

One cause of the problem of unknown worker records was the recording method. When we loaned out an active personal dosimeter (APD), we used a handwritten account book. Most of the errors were entry errors to the list or mistakes. Now each worker is assigned a card with a unique bar code (and which has carried a picture since 6 February 2012).

Six workers exceeded the 250 mSv dose limit for emergency works. They had a physical checkup at the National Institute of Radiological Sciences. They regularly undergo a medical examination. Three were operators working in the unit 3&4 control room (effective dose 352-678 mSv); the other three were in units 1&2 maintenance (effective dose 309-476 mSv). All six had a greater internal than external dose, by a factor ranging from 2.2:1 to more than 10:1.

The operators were exposed was because they were more likely to take in radioactive material in the main control room. The heating and ventilation system didn’t work because of loss of power. Because of the long working hours, they had to eat and drink in the main control room. They had to work near the MCR emergency door. The maintenance crew were busy with the restoration of the plant. Although they did the best they could with radiation protection, because the situation progressed rapidly, it was very difficult to put on protective equipment. There were gaps in masks.

TEPCO measures responded to these issues by communicating radiological protection, distributing equipment, prohibiting eating inside the radiological area, adopting new masks and training workers to carry out a radiological survey before work.

Also, two female workers exceeded the dose limit (5 mSv per three months for workers, 4 mSv per three months for managers; their effective dose was 17.6 and 7.5 mSv). Two non-radiation workers in the anti-earthquake building were also exposed beyond their limit (1 mSv/yr). An investigation determined that most likely they were exposed at the anti-earthquake building. Setting up a buffer area that excluded radioactive material was delayed. The entrance of the building was not airtight; its doors were warped by the hydrogen explosions at unit 1 and unit 3. It was difficult to prevent an inflow of radioactive material.

As a result, TEPCO prevented female workers working at Fukushima Daiichi from 23 March. Workers have changed flooring to tile that radioactive material does not attach to, and have deployed exhaust systems. These measures have reduced airborne radioactive matter concentrations in the anti-earthquake building. Dose exposure at the seismic-isolated building was reduced by installing leaded boards against the windows. New protective floor tiles were installed at the anti-earthquake building.

TEPCO was unable to use about 5000 active personnel dosimeters and their chargers after the tsunami because the storage building was flooded. Workers gathered about 320 available APDs. Since every worker could not have an APD, a representative worker, who was in the same place doing the same job, carried one. One hundred APDs were purchased on 1 April 2011; 640 were brought from Kashiwazaki Kariwa. Later, each worker was able to have their own APD (and as of September 2012, there were 6300 APDs).