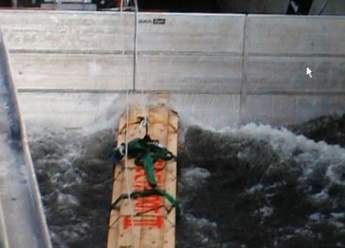 Placing temporary flood barriers to prevent cities from inundation is labour intensive and can often be very costly. The Dutchdam is an alternative for conventional temporary structures such as sand bags and panel barriers. The system is always on standby, folded in a trench and particularly suited for city promenades, quay walls and levees, where raising existing flood defences is unappealing.

The Dutchdam concept came about in 2000 following an idea of designer Corné Rijlaarsdam. A news item on flood defences resulted in the concept of a barrier folded in a trench on location. The advantages of this kind of system are that all elements are directly available (no time loss due to transport and no costs for storage and transport) and construction can be completed quickly. The system is an alternative for dikes at locations with insufficient space to heighten the structure, for instance when houses are built partly in the dike body, or when the dike forms part of a more complex infrastructure.

Initially, Corné Rijlaarsdam developed the Dutchdam-Duplo flood barrier which can withstand water levels up to a maximum of 1m. Later, he improved the barrier structurally to withstand higher water levels and heavier collisions, resulting in the Dutchdam-Delta. The invention received several awards, including the 2004 Dutch Design Prize.

The concept of the Dutchdam-Duplo barrier convinced the authorities in Dublin, Ireland, who ordered the system for protection of the city against flooding by the River Liffey. The barriers were placed in the quay wall in openings giving access to the city’s promenade, while allowing pedestrians to walk over the cover plates. During a flood a small number of people can set up the barrier within a few minutes.

The Dutchdam-Delta is an aluminium structure that can withstand water levels up to 2.4m. When water levels are normal, it folds into a trench and people and traffic can cross the plates covering the trench. This trench is made of concrete and placed on a sheet piling as foundation in the dike or quay. The fact that the barrier is folded at site means that the barrier is always on standby. In the case of an extreme flood the barrier will be unfolded and the flood panels should withstand wave and debris impacts. Therefore, the front panels are placed against vertical stanchions which together with longitudinal supporting elements form the backbone of the structure. All elements are connected to each other without using bolts. It also makes the barrier less vulnerable for vandals. As all elements are connected, impact loads are absorbed by the entire structure. This explains the strength of the structure, which has been confirmed by calculations and practical tests. Even in case of a collapse of the top of the stanchion, the lower part of the stanchion will maintain its function because it is designed to withstand this type of damage.

It has to be emphasised that the Dutchdam-Delta cannot be compared with traditional emergency flood barriers consisting of individual beams and stanchions. The advantages are that the elements are connected, no bolts are used, and the barrier is already present at the site.

Although the Dutchdam concept received several awards and its predecessor, the Dutchdam-Duplo, has been built successfully in Dublin, the Dutch Ministry of Transport, Public Works and Water Management required validation of the calculation results. They commissioned WL | Delft Hydraulics to carry out a test programme in order to determine how the structure withstands the impact of waves, floating debris and trees. The test programme carried out in October 2006 comprised wave impact tests and collision tests. The tests were attended by a number of people, including representatives from water boards, local authorities and the press.

Two sections of 2.4m each were built in the testing facility – the Delta flume. It had three vertical supports, two of which were fixed at the wall of the Delta flume. The bottom of the Dutchdam was fixed to the bottom.

The Dutchdam-Delta can be applied over hundreds of meters along the length of a river, but has been designed for riverine or estuarine areas with limited wind speeds and short fetch lengths resulting in limited wave heights. Basically, the barrier should protect cities against inundation. Subsequently, the wave tests were carried out with irregular waves according to a Jonswap spectrum with a significant wave height of about 0.4m and a peak period of 3.4 seconds. These wave characteristics reflect realistic conditions in riverine areas. In addition, tests with regular waves were carried out. This resulted in a standing wave of 0.8m. The wave tests revealed more about induced wave pressures on the front panels of the Dutchdam-Delta. The induced wave pressures on the front panels were measured at the top and at 0.5m and 1m below the top of the barrier.

In order to test the impact of floating debris, trees and small rowing boats, collision tests were carried out using coupled beams with masses of 300kg and 600kg. The coupled beams were towed with the measuring carriage at speeds of up to 2m/sec and the towing rope was cast off within 0.5m of the Dutchdam-Delta. The coupled beams hit the dam perpendicularly at different spots. The tests were carried out with water levels just below, and up to 1m below the top of the structure. The movements of the front panels of the Dutchdam-Delta caused by the impacts were measured with optical displacement devices. These were placed behind a stanchion and in between two stanchions.

The test results illustrated that the Dutchdam-Delta can withstand heavier impacts than expected during extreme floods. In reality, trees would hit the structure at an angle with speeds of less than 2m/sec and an applied Dutchdam-Delta barrier along a river will, in general, be much longer than the 5m tested in the flume which was also fixed to the walls of the flume. The short length in the flume together with the fixation to the flume walls implies reduced flexibility and therefore less resilience to impact loads. The tests and the numerical computations showed that the entire wall absorbs the energy of an impact. This is an essential characteristic of the dam.

The test results for the Dutchdam-Delta cannot be compared with clear standards, because little is known of the strength required for emergency flood defences. Only a German document, BWK-Geldbrick, describes a theoretical collision load. However, this guideline still raises many questions.

In summary the Dutchdam-Delta was strong enough to withstand colliding objects with a mass of up to 600 kg moving up to 2m/sec when water levels are just below the top of the structure and with extreme water level. No damage occurred, which allows even heavier collisions resulting in deformations before the system collapses. The flexible characteristics of the Dutchdam-Delta and the way in which the panels are coupled, both to each other and to the base, allow a significant amount of the load caused by a collision to be absorbed.

Currently there are plans to build the Dutchdam-Delta in Nijmegen, the Netherlands, cities in the UK including Glasgow, several cities in Germany such as Regensburg, two more in Dublin, with a further order for Lismore, Australia.

Advantages
No houses need to be demolished.
Existing dike road remains intact.
Cables and services are not disturbed.
Approach and slip roads do not change.
The view and accessibility remain intact.
Social restrictions are complied with.
No mounting structure to be built.