Crane technology: up to the challenge

With heavily regulated safety measures at the core of the industry, James Lawson speaks to Svein Harald Hetland, principal engineer, BP Norway, about the factors driving innovation and improvements in crane technology and lifting procedures. 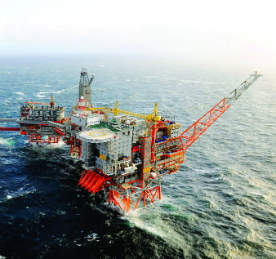 Offshore equipment is continually evolving to meet the changing demands of upstream operations, and cranes and lifting equipment are no exception. Over the last decade, there have been a multitude of improvements to crane technology and lifting procedures.

But while applauding this continued innovation, Svein Harald Hetland, principal engineer, BP Norway, sees the mandatory standards within offshore oil and gas as responsible for driving improvements in lifting performance and, above all, safety.

"The improvements seen in the North Sea in the last ten years are mainly because of EN 13852-1, released in 2004," says Hetland. "The oil majors in the Norwegian sector jointly developed best practice for lifting operations called NORSOK R-003 and NORSOK R-005 [LOLER 1998 in the UK]. These define clear requirements for management involvement, thorough training, procedures, roles and responsibilities."

Harmonising with the general standards of the ‘European Machinery Directive’, EN-13852 codifies principles like inherently safe design, safe operation, safeguarding and risk assessment. Strength in proportion is one example of inherently safe design, reducing the consequences of any accidental overload where other safety systems are unable to prevent a structural failure.

Other examples include the use of ductile materials to avoid brittle failure in lifting hooks, while the crane hook should also open up smoothly. Similarly, the boom tip should fail instead of a complete boom or crane failure.

Where cranes may be used for personnel transfer (a rare event in the North Sea today), EN-13852 directs the use of backup systems for critical functions and parts, like braking or limit switches, and increased partial safety factors for load-bearing components.

"All of BP’s offshore cranes in Norway have these backup systems as standard now," says Hetland. "It is required for personnel transfer, but also makes normal operations safer."

Hetland points to the standardisation of automatic overload protection systems as one of the best features of EN-13852. These systems help protect against entanglement or snagging on the supply vessel. Unlike a load limiter that will stop lifting altogether, the automatic overload protection system will let the crane spool out rope to compensate for vessel heave – while still holding 100% of the load.

"In the 1970s, cranes risked structural failure due to entanglement," says Hetland.

Hetland himself has been deeply involved with the development of the EN-13852 standard over the last decade, and the fruits of this work will appear later this year with the release of the latest 2013 revision. This new release makes reference to the EN-13001 series of European crane design standards, also published in its latest form this year.

"Strength in proportion is one example of inherently safe design, reducing the consequences of any accidental overload where other safety systems are unable to prevent a structural failure."

EN-13001 replaces or modifies many well-known concepts and methods used for calculating stresses and fatigue. One example is how it takes account of a crane’s intensity of use over its lifespan.

"Better standards for areas like rope reeving will help improve the fatigue lifetime of the steel ropes," says Hetland.

The latest EN-13852 revision also opens up the use of further new technology such as the ability to monitor and compensate for vessel deck motion during a lift. Systems like ShoreConnection’s deck motion monitor or Optilift’s motion reporter use data feeds from sensors on the supply vessel and the crane itself to provide the crane operator with real-time information on wave height, and supply vessel motion during lifting.

"Deck motion monitoring systems offer better safety and improved lifting effectiveness in bad weather," says Hetland. "This is of great importance for BP in the North Sea, given the rough seas in winter."

Data on height and vessel movement is used to calculate allowed lifting weights for each piece of cargo, improving on the significant wave height method used with most of today’s safe load indicators. Additional video feeds from the vessel let the operator see otherwise blind areas of the cargo deck.

Implementing these systems is straightforward, involving the replacement of the boom-tip camera, monitor and one computer module. Overall, the more accurate lift weight estimates combined with other features, translate to safer working and a wider weather window.

"These systems give the crane operator a good indication of when the crane tip is vertically above the container, so if he lifts it up, it reduces the possibility of the load swinging, which could be a hazard for the deck crew," says Hetland. "There are some systems being developed where the hook can follow the movement of the vessels, but they currently need a lot of power. We look forward to seeing further developments."

Live data on wave height, deck height and so forth also supports active heave compensation, another area of crane technology that has seen significant development over the last decade.

"Active heave compensation systems give you the ability to make deeper and heavier lifts, even during bad weather," says Hetland. "There have been a lot of developments in subsea cranes in the last ten years."

"All this means that you can control the dynamics in rougher sea states, and you have an improved ability to land the equipment in the correct position on the seabed," says Hetland.

Monitoring wire rope fatigue as well as the computer calculation and monitoring of loads have been areas of significant development over the last decade.

"The cost of the steel ropes for heavy lifts makes it sensible to have more systems for fatigue and defect checking, and this is especially important in subsea lifting where you have 2,000m of steel wire," says Hetland. "You are lifting expensive equipment and these are important lifts."

In the future, BP aims to build up comprehensive data on wire rope condition and to record frictional wear by comparing historic and live data. Its cranes would be fitted with an MPI (magnetic particle inspection) monitoring system that would examine part of the wire cable each time the crane is operated.

Modern modular designs have helped simplify maintenance, with the few all-electric cranes removing the need for (and the mess of) hydraulic maintenance. However the latest crane designs have had little other impact offshore.

"Modern cranes tend to have smaller, more compact systems and lighter parts," says Hetland. One reason for this is the higher pressures used in hydraulic systems today, up from less than 50bar in the 1970s to 250-350bar today.

"Because you can carry parts more easily, it simplifies maintenance," continues Hetland. "Otherwise more compact cranes don’t make much difference, though less weight does help with the total platform weight."

Modern bulk hose handling systems are another big step towards safer lifting. Features of leading systems include automatic connection and disconnection with no dangerous manual intervention, plus instant shut off on accidental disconnection to avoid pollution.

"Hose handling to and from the supply vessel is a challenge for deck crews," Hetland says. "With a hands-off system, you can connect and disconnect automatically so it’s not necessary for any deck crew to be involved."

The Norsok R-002 standard requires an automatic technique for hose handling but, like many emerging technologies, compatibility is a barrier to wider deployment.

"We are looking at a variety of systems to make hose handling safer but the challenge is vessel standardisation in order to connect with such systems," says Hetland. "Some of them are able to use one system while others employ other methods."

"One of the limits today is available space offshore," says Hetland. "Sometimes the containers will go out several weeks or even months before the project teams are going offshore. With these programmes, you can see the location of your containers and other goods and cargo at all times. It helps you optimise the use of your supply vessels and also how you use the cargo deck areas onboard the platform."

There will be plenty more loads for the North Sea’s crane operators to handle in future. With rigorous standards and continually improving equipment, lifting operations should remain efficient, speedy – and safe.