Building an RCC dam in the Jordan valley 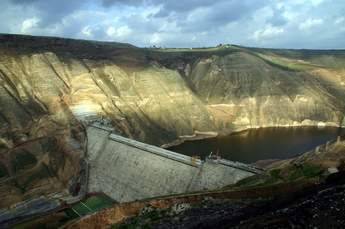 The Al-Wehdah dam project is located on the Wadi Yarmouk river in the Hashemite Kingdom of Jordan. The RCC dam was constructed under the Ministry of Water and Irrigation, Jordan Valley Authority. Investigated initially as a water conservation and irrigation scheme in the early 1950s, Al Wehdah is now a multipurpose project to include potential future power development for neighbouring Syria. Funding is being provided by the Government of Jordan, The Arab Fund for Economic and Social Development, and the Abu Dhabi Fund for Development.

Construction management and design is provided by MWH International Inc, in association with Consolidated Consultants Engineering and Environment of Jordan.

Ozaltin Construction Trade and Industry Company of Turkey was responsible for dam construction. Ozaltin currently has one other large RCC dam under construction (Cindere dam) and another under contract (Beydag dam), both in Turkey. Further expertise is being provided by the contractor’s technical consultant Fransisco Rodrigues Andriolo of Brazil.

Construction of the Al-Wehdah dam commenced in May 2003 and is substantially complete. RCC production was completed in just 19 months, making it was the sixth fastest constructed RCC dam to date worldwide.

Al Wehdah is currently the tallest and largest RCC dam by volume to be built in the Kingdom of Jordan. It is also the fourth RCC dam to be constructed in the country. The other RCC dams are:

All four dams were designed as mass gravity structures with their main purpose being water conservation and irrigation and potential future urban water supply.

During September 2005, a collective effort from engineers of Harza Engineering, JVA, Ozaltin, with input from Brian Forbes, suggested implementing the sloped layer method of RCC placement.

The contractor successfully adopted and implemented this up to the spillway elevation of 107.1m asl. It should be noted that this method of construction was instrumental in RCC production and proved a great success.

The sloped layer method of placing RCC was conceived during the construction of Jiangya dam (131m high, Hunan Province, China) in late 1997. This method has further developed and is commonly used in the construction of large RCC dams for practical applications from a production, quality and constructability standpoint. This method decreases the number of lift joints hence significantly decreases the amount of cleanup. The application of bedding mortar further facilitates the forming operations and has been shown to increase the rate of RCC production. At the time of construction Al Wehdah was the eighth RCC dam constructed worldwide using this method and among the largest by volume.

RCC is mixed in two weigh batch plants with each plant having 2x4m3 capacity Simem twin shaft compulsory type mixers. The mixers are fully automated providing a near continuous feed of RCC to the placement in the dam body. RCC production continued 24 hrs per day, 7 days per week with periodic shutdowns for maintenance.

The plant’s maximum sustained batching capacity as installed was approximately 360m3/hr. During the six month maximum placement period (September 2005 to July 2006) the average RCC placement rate was over 100,000m3 per month. During the summer months the ambient air temperatures reached a maximum of over 40°C. A 70m slow-moving wet belt (0.5m/sec), along with chilled water (3°C), was introduced at the inline aggregate feed at the load bins and along the wet belt to chill the coarse aggregates. Chilled water is also being used in the mixing operation to further reduce the RCC placement temperature at the dam.

RCC was transported to the dam using a conveyor delivery system directly from the batching plant. Placement was supplemented by Caterpillar 769 haul trucks for further distribution within the dam body. The maximum length of the conveyor was 750m. A swinger conveyor was also located at the placement to facilitate the distribution of RCC from the conveyor system into the haul trucks. It was mounted on a jack post system and was raised with the dam body. The conveyor system had a capacity that is compatible with the RCC production at the plant. Placement operations at the dam body were rarely the limiting factor for RCC production.

The upstream of the dam has a heel block formed as a stepped face with a 1.2m vertical rise and corresponding 0.72m horizontal steps (0.6h:1v). The upstream stepped slope commenced at elevation 21m asl and discontinued at elevation 65m asl where the upstream face rises vertically. The downstream face of the dam is also stepped from the stilling basin level with a 1.2m vertical rise and corresponding 0.96m (0.8h: 1v) horizontal step, and continues entirely to the top of the dam’s crest at El 116 asl.

The upstream and downstream faces were constructed using the grout enriched RCC (GERCC) method at the abutment contacts and all formed faces within the dam body. GERCC is commonly used in RCC construction for the purposes of creating a more fluid RCC mix similar to conventional vibrated concrete. GERCC also provides a more impervious upstream face and reduces seepage at the abutment contacts along the rock foundation.

The non-gated OGEE type overflow spillway is 250m long and was constructed of structural concrete in conjunction with a stepped cascade, consisting of a composite GERCC and conventional concrete, facing symmetrical to the spillway centreline of the dam on both abutments.

The main intake is located near the left abutment of the dam consisting of 2x3m diameter penstocks encased in structural concrete known as the irrigation and power conduits. The main intake structure will have three intakes at elevation 70, 80 and 90m asl to draw water from the future reservoir. Low level outlet works within the dam will also draw off water from the dead storage to reduce the accumulation of silt within the reservoir.

The author would also like to acknowledge all involved with the project including:

• The Ministry of Water and Irrigation, Jordan Valley Authority.

• Special tribute is also paid to the RCC materials engineer, Marwan Aridah, who recently passed away. His dedication to the project until the end of construction was and will continue to be respected by all who worked with him in the successful completion of the project.