A monitoring platform by Tollgrade that consists of smart grid sensors and predictive grid analytics software is enabling utilities and DSOs to display a real time map of what is happening on the network. 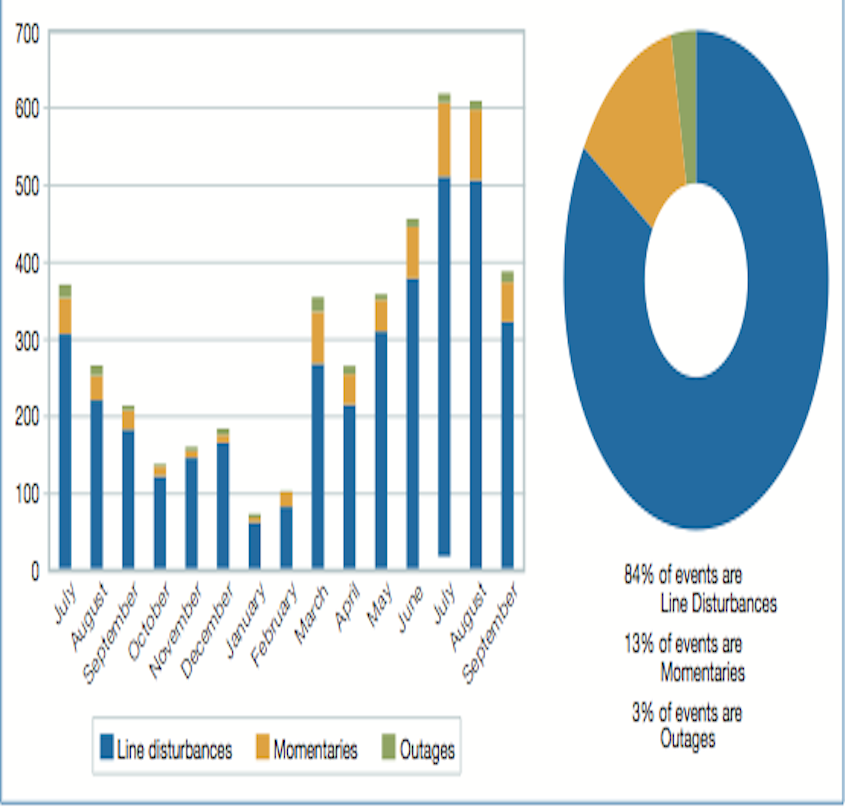 Ideally, electric utilities and distribution network operators would be able to display a real time map of what is happening on the network. Tollgrade has designed such a distribution monitoring platform. It is designated ‘LightHouse’ and consists of wisely distributed smart grid sensors feeding information to predictive grid analytics software. The technology enables the operator to identify faults and bring distributed energy resources on to the grid in controlled conditions.

The system’s main advantage is that it is capable of finding the signs of faults and asset health problems in advance of a potential outage. Temporary disruptions of, or disturbances to the supply are frequently the precursors to more serious power failures. Tollgrade’s platform, says its maker, can identify the cause and effect as well as the location of these kinds of disturbances.

To date the company has installed versions of its system in networks in the UK and USA. One UK DSO is using the technology to monitor weak points in the network, to predict and prevent dangerous conditions affecting overhead lines located across roads or next to playing fields or bodies of water. These ‘critical crossing points’ are the most likely places for hazardous situations to occur – for example by vehicle strikes and inadvertent contact with kites and fishing rods. Currently in the development stage, the smart grid sensors are being adapted for this application to help prevent the occurrence of potentially lethal accidents.

The ARC project is a real-time operating and control project that uses minute- by-minute network information to allow electricity supply to be matched with demand, allowing the network to operate as efficiently as possible, and is the first Tollgrade project of this type. This new initiative will also help connect renewable energy generation to the distribution power network earlier, says Tollgrade, while reducing connection costs. ARC is also intended to help meet the UK and Scottish governments’ targets for increasing the amount of energy from low carbon sources.

“ARC seeks to help community groups connect their own renewable energy to the distribution grid," said Martin Wright, a lead engineer at SPEN. "What we like about [these] sensors is that they can be installed anywhere on our distribution network. This is allowing us to connect more local energy producers to the grid."

In June of 2014, Tollgrade partnered with DTE Energy to work on a Clinton Global Initiative (CGI) Commitment to Action for a comprehensive grid modernisation project in the Detroit metropolitan area. The goals of the commitment were twofold. First, to prove the concept of a ‘predictive grid’ across DTE Energy’s service territory. To achieve such a grid, DTE Energy elected to deploy the LightHouse solution. And second, to publish the results in a series of eight ‘predictive grid quarterly (PGQ) reports’ over two years. (Figures 1-3).

The aim is to provide a new industry benchmark to show how US utilities can better detect and respond proactively to power outages by monitoring their distribution grids using smart grid sensors. The data should reveal new methods in the battle to prevent or shorten outages and these could become standards adopted industry-wide. By collating the results of DTE’s CGI project and other Tollgrade sensor deployments nationwide, the company hopes to identify patterns in the sensor data that could help utilities adopt a proactive posture toward preventing outages.

This consists of medium voltage high accuracy smart grid sensors that are software-defined and inductively powered (ie battery-free) with flexible cellular or Wi-Fi communications. These sensors are lightweight boxes, about a foot long, that can quickly be clamped on to overhead MV distribution power lines. They are easy to install with a ‘hotstick’ and can be safely deployed on the line in a few minutes. Its maker says that the system’s ease of installation, low cost and maintenance requirements, together with the ability to measure voltage to 0.5% accuracy, renders monitoring the distribution network an affordable option.

Predictive grid analytics software communicates with the sensors to bring back data from all the events that are captured by them to centralised software.

The resulting analysis classifies grid conditions and assesses the health of the network in real-time. This grid health data can then be analysed by utility engineers, enabling them to better understand more of the ’cause and effect’ aspects of disturbances like ‘momentaries’, outages or equipment failures. Once events are classified, customisable rules and alarms can be defined to alert utilities to conditions that could cause grid failure like inefficient operating conditions, deteriorating asset health, or the signs of anomalous behaviour.

Visualisation tools pinpoint locations where these problems occur so crews can reduce their foot patrol and drive times. In many cases a 10-15 minute advance notice is given of outage situations. This, combined with the location information and event history, dramatically improves power restoration times and crew safety.

LightHouse Sensors are deployed at over 30 utilities including DTE Energy. The company’s December 2015 report, derived from data gathered from all its sites worldwide, outlined several key findings.

Trends identified in earlier reports continue to exhibit similar patterns. 84% of the events Tollgrade monitored over the last fifteen months across its sensor footprint were line disturbances – caused for example by a tree or an animal, or suggesting that an asset on the grid is about to fail – compared with 13% momentaries and 3% power outages. Line disturbance is a key metric that would not be measured without installed sensors since line disturbances do not trip the protective devices most utilities install on their grid. Utilities have not previously had indications of these events or understood just how frequently they occur on the network.

The 13% of events that are classified as ‘momentaries’ are short outages that typically cause clocks to blink, computers to lose data or automobile manufacturing lines to stop unexpectedly. EPRI estimates that momentaries and power quality events cost businesses as much as $15 billion to $20 billion annually. When the LightHouse sensor sends a momentary event notification, it also includes the location where the problem is occurring.

Only 3% of events classified by sensors were actual power outages. As Tollgrade builds trending data, this is a metric it intends to watch carefully to determine if utilities using its sensors experience fewer outages compared to those that are not monitoring the distribution network.

The percentage contribution of each type of event has, over the period in question, remained consistent. But by a huge margin, the most frequent events measured were line disturbances, indicating an opportunity to uncover underlying issues before they become power interruptions.

Most events occur in the summer months then drop off dramatically in October, with a slight upward turn in the winter during the months of November and December. The data also shows a large spike in events of all types (in March 2015) owing to the impact of a series of ice storms that affected a large area of North America. As the spring season progressed, line disturbances and outages increased. The data shows how closely line disturbances are related to outages, and how important it is to view line disturbances as an early indicator to outages, confirming that line disturbances should be carefully monitored and adopted by utilities and regulators as a new category essential to the maintenance of line health. Figures 4-6 show some of the characteristic waveforms associated with events that have caused outages.

Figures 2 and 3 shows the monthly and seasonal trends for each event type. Line disturbances, outages, and momentaries events followed a similar pattern over the last 15 months. Most events took place in the summer months, with a slight upturn at the start of December that was followed by another drop in frequency, and an increase of events in March. We notice another steep increase when we entered the summer months and more specifically with the number of line disturbances – a 25% increase in comparison to the winter season.

Summer months consistently display high frequency of events, mostly owing to high loading on lines, equipment failures and because in the areas under scrutiny summer is the storm season with heavy rain and winds.

The winter months displayed little activity, until early spring 2015 when the previously mentioned ice storms impacted a large area of North America and affected numerous customers. The steep increase for the summer season is explained by two factors:

First, there were by then more sensors in the field and, therefore, more data collected, and because during the spring season, many of the utilities which provided data, including DTE Energy, deployed additional smart grid sensors in preparation for the summer storm season. This significant increase in the number of line sensors is reflected in the increase on the total amount of line disturbances, momentary outages, and permanent outages.

Secondly there was effect characterised by a wish to strategically target poorly performing circuits. With more such circuits being actively monitored, a larger number of outages are being measured by the sensors when compared with a deployment where sensors are installed on a variety of lines throughout the utility.

This, says Tollgrade, re-affirms its original finding that line disturbances closely correlate to outages and the importance of utilising line disturbances as an early indicator of outages while monitoring poor performing circuits.