Some 6500 km of power distribution lines run through the Ruhr city of Essen. But another, rather special, kilometre will soon be added to the electricity grid. 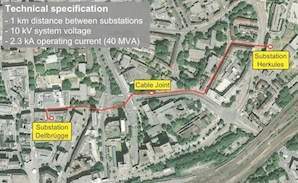 On 9 April this year the city of Essen was host to a world premiere, when first ground was broken for the laying of a revolutionary superconducting electricity transmission cable. Known as the AmpaCity project, the 10 kV one kilometre line will replace the conventional 110 kV lines between two substations in Essen’s city centre and is part of a superconductivity research project costing some €7.2 million to the project partners. These are Nexans, as manufacturer of the cable and cable systems, the Karlsruhe Institute for Technology (KIT) and the project sponsor Jülich (PTJ). The total costs amount to some €13.5 million, including €6.3 million from the Federal Ministry of Economics and Technology (BMWi).
The three-phase, concentric 10 kV cable will in due course be the longest installed superconductor cable in the world. Superconductor cables are a solution for avoiding further expansion of city networks with high-voltage cables by allowing greater levels of power transfer in the same right of way and at lower distribution voltages. Installing more superconductors would also mean that resource- and land-intensive transformer stations could be demolished.

Development and testing
In co-operation with RWE, Nexans has now completed the 18-month development stage of the AmpaCity project. Following the successful test series of the prototype at the high-voltage laboratory in Nexans’ Hanover plant, production of the 10 kV HTS system can now get underway. It will replace a conventional copper cable in the RWE-operated distribution network by the end of the year and will transport the same level of power, 40 MW. The combination of a superconductor cable with a superconducting fault current limiter, produced at Nexans SuperConductors GmbH in Hürth, also constitutes a ‘world first’.
The system’s suitability was proven by the prototype of the HTS cable in a lightning impulse voltage test at roughly seven times the nominal voltage as well as during continuous loading at three times the operating voltage. During the tests, the connection joint belonging to the system and the specially developed, very compact cable terminators were also tested. The terminators are used to create the transition from the cryogenic superconductor system to the conventional copper network.
At temperatures of around -200°C, the cable can transport at least 100 times more electricity than copper. The required operating temperature can be created relatively easily using liquid nitrogen, which is widely available as it is also used as a coolant in many other industrial processes. Despite the extra bulk needed for thermal insulation of the superconductor cable, it can transport five times as much power as a copper cable with the same outer diameter – and with much lower levels of loss in the conductor.

Future prospects
HTS superconductors have been ready for deployment in energy-related applications for some years now. It is anticipated that in due course such innovative cable systems will be in a position to compete on a cost basis with copper solutions in energy-intensive applications. But that is unlikely to happen while so few working systems are in operation.
However there is a potential market wherever electrical power must be transported at bulk levels in restricted space. "The superconductor cable being laid in Essen city centre, the first in the world to have a length of one kilometre, will facilitate a discernible increase in the power density and efficiency of the city centre power supply," said Dr Andreas Breuer, head of the New Technologies / Projects division at RWE Deutschland AG. Christof Barklage, CEO of Nexans Deutschland commented "This project could revolutionise the power networks. We are happy to be among the pioneers in this fascinating, trend-setting technology."