Back to School – refurbishment work in the US

This August saw the beginning of a US$1.4M improvement project at the School Street hydro power facility in New York state, US. Several of the enhancements that are currently underway are beyond the improvements the owner planned as part of its Federal Energy Regulatory Commission (FERC) license renewal, and take into account the historic significance of the facility, and its contribution to the city of Cohoes 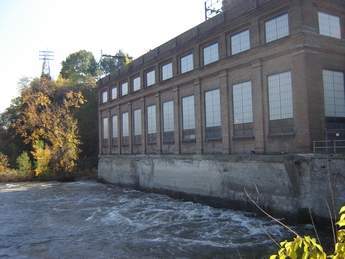 The School Street hydro power facility sits downstream from the scenic Cohoes falls on the Mohawk river in upstate New York. The plant, which was built in 1915, generates 38.8MW of renewable power that is sold into New York State’s electricity grid via the wholesale power market. The School Street plant is one of 72 hydro power facilities owned and operated by Brookfield Power in New York state, that generate a combined 682MW.

In March 2005, Brookfield Power filed a settlement agreement with the Federal Energy Regulatory Commission (FERC) which it says represents a diverse and comprehensive array of public interests, and is the result of a collaboration between Brookfield Power, the New York State Department of Environmental Conservation, the United States Fish and Wildlife Service, the National Park Service, the City of Cohoes, New York Rivers United, New York State Conservation Council, New York Power Authority, the Rensselear County Conservation Alliance and numerous other stakeholders. Brookfield Power’s licence renewal is currently pending with the FERC.

In general, the agreement will provide flow over the Cohoes falls every day of the year, protect fish and wildlife, increase power generation and create new recreational access and viewing areas. Specifically under the agreement, Brookfield Power will:

•Ensure continuous water release over the Cohoes falls every day of the year, with water flow doubled on weekends and holidays from May through October.

•Create new viewing areas and access improvements, including a new footbridge over the power canal and a new observation area at the crest and base of the falls – scenic vantage points never before open to the public.

•Collaborate with Native American Nations, the National Park Service and the New York State Office of Parks, Recreation and Historic Preservation to develop a Historic Properties Management Plan. The Plan will ensure continued respect for the site’s historical and spiritual significance to the Haudenosaunee Confederacy, preservation of National Historic Landmark properties at the project, and recognition of the area’s historical importance.

•Increase power generation capacity from 38.8MW to approximately 50MW, which represents a ‘right-sizing’ of the facility for this portion of the Mohawk river.

The first phase of improvements presently underway at the School Street site are separate from what will be accomplished under the FERC licence renewal.

The three main components of this site enhancement plan include exterior building improvements, grounds maintenance and access road improvements, and the use of materials and methods consistent with the facility’s historic surroundings. These plans were approved by New York State and the City of Cohoes Historic Preservation Commission, and received the following public endorsement from Cohoes Mayor John T. McDonald III: ‘These improvements will preserve the historical aspect of the School Street facility and the nearby Harmony Mills Historic District, protect this natural hydro power resource, and add to the quality of life for Cohoes residents and visitors to the City. Brookfield Power’s improvements, in concert with our efforts to increase tourism to this area via our recreational trails, lighting of the Cohoes falls and the revitalization of the Harmony Mills, all will create a dramatic sense of place.’

Specifically, phase one of the School Street enhancement plan includes:

•Exterior building improvements such as masonry repair, installation of new windows and exterior lights, and painting.

•Improvements to the facility’s access road off the main thoroughfare, North Mohawk Street, and Overlook Park, adjacent to the School Street facility, to significantly enhance the viewing opportunity of Cohoes falls.

Once the FERC licence renewal is secured, the School Street facility has the potential to be the first site where a small-scale advanced hydro power turbine will operate. Brookfield Power continues to work with the electric-power-research-institute, Palo Alto, California, and the Hydro Research Foundation and the National Hydro power Association, Washington, D.C. on the advanced turbine initiative.

The advanced turbine design being considered for use at School Street is now under development by Alden Research Laboratory of Holden, Massachusetts. The goal of this Alden/ Concept NREC turbine and other novel advanced turbine designs is to make better use of existing resources, thus combining fish passage and protection with the ability to generate additional power.

Currently the School Street site features five turbines. Brookfield Power’s plan includes the option for a sixth unit that would use the Alden/Concepts NREC advanced hydro turbine design. The Alden/Concepts NREC turbine was selected because studies indicate that this design offers better fish survival rates for smaller plants like School Street, when compared to other state-of-the-art designs. By adding the advanced turbine, plant capacity would be increased to 50MW from the present 38.8MW.

Biological and engineering studies were performed by Alden/Concepts NREC over a two-year period. Tests were conducted at different operating heads (40 and 80 feet, or 12.2 and 24.4m). Six fish species with diverse morphologies and life histories were tested: American eel, alewife, white sturgeon, smallmouth bass, rainbow trout, and coho salmon. Mean lengths of the test fish ranged from 1.5 to 18 inches (3.8 to 45.7cm). Results of these tests indicate that fish survival through the full size prototype turbine would be 94% to 100% depending on the fish length. The full sized turbine would have a 90.5% maximum power efficiency.

These pilot scale study results are highly encouraging. The next logical step in the development of this promising new turbine would be an evaluation at an actual hydroelectric facility such as the School Street project.