Alpha ventus was the first German offshore windfarm to gain approval and is likely to be the first to be constructed at sea under true offshore conditions. Bad weather has blown it off schedule, but it is still expected to transmit to the grid by the summer of next year. 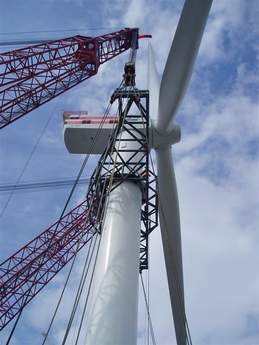 The r180 million alpha ventus offshore wind farm is a pioneer project undertaken jointly by subsidiaries of three major utilites, EWE AG, E.ON Climate & Renewables, and Vattenfall Europe New Energy and partly sponsored by the German government. Situated some 45 km north of the island of Borkum, in water about 30 metres deep, it is the first German wind farm to be constructed at sea under true offshore conditions. The design, construction, operation and grid integration of the alpha ventus research project as a test field is intended to gather fundamental experience with a view to the future of commercial offshore wind farms in the country.

Alpha ventus will include twelve wind turbines – six Multibrid M5000 and six REpower 5M units, plus an offshore transformer station at the south-eastern corner of the site. A control room will be set up onshore to supervise the operation of the wind turbines. Feeding into the German grid will be handled by the transmission system operator E.ON Netz in Bayreuth.

The original plan was to complete the southern half of the farm, between 2008 and 2009 with the six Multibrid units and the offshore transformer station. In the summer 2009 the northern half was to be started. The six REpower turbines, for which the contract was only signed finally at the end of November, will be manufactured at the company’s new offshore assembly plant in Bremerhaven, with delivery originally slated for summer 2009. The REpower 5M was developed especially for offshore operation. REpower has now successfully installed 17 turbines of this type, both onshore and offshore, including two turbines in the Scottish North Sea (Beatrice) at a water depth of 44 meters, and six at the first Belgian offshore wind farm, Thornton Bank.

As late in the day as July 2008 work was still expected to get underway in time for first grid connection before the end of the year, work on the foundations having proceeded according to schedule until the beginning of August, but in September the weather conditions at sea deteriorated considerably and brought a halt to construction work.

Constructors Testfeld und Infrastruktur GmbH & Co KG (DOTI) postponed the laying of undersea cables for the wind farm’s internal cabling, scheduled for early September, because the turbine tripod foundations could not be erected. This postponement will probably mean that the first offshore wind turbine will now be completed in spring 2009.

Work to construct the foundations of the offshore transformer station had been proceeding as planned. Piledriving work had begun on the 45 metre high, 30×30 m foundation structure. The construction vessels had gathered at the offshore site in mid-August and pre-construction preparations were started, before the deterioration in the weather prevented the erection of the first tripod.

Since then the construction crew has been waiting for weather conditions good enough to enable them to continue their work on the site. Positioning and anchoring the 700 ton, 45 metre high foundations on the sea floor requires a weather window of about four days of calm seas; these conditions which have not occurred in the North Sea since mid-August.

However work on shore is continuing. The transformer station’s foundation (jacket) has been manufactured in Wilhelmshaven, transported out to sea and anchored in the wind farm site as planned. The topside, containing the transformer and associated cables, stands at a height of 20 metres above the water. It is currently waiting in Wilhelmshaven to be delivered out to sea, where it will be positioned on the jacket. The offshore construction work will use a special lifting platform, supplied by Hochtief and named after the Nordic god Odin.