A tour of Tanzania

The Yearbook 2005 will be published shortly. As a preview to the country profiles section, Leonard Kassana gives an overview of hydro power in Tanzania 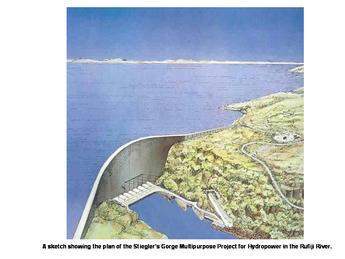 THE use and development of hydro power in Tanzania works within the context of fundamental and lasting economic, environmental and social currents. Like other energy resources, hydro power is being called on to help meet the electrical needs of the nation’s population which grows at 1.72% annually (2003 estimates).

• Tanzania has the highest peak of Africa namely Kilimanjaro which is covered by ice throughout the year. The Kilimanjaro ice is a source of the Pangani river, home to hydro power plants with a combined capacity of 96MW.

• Tanzania has the largest hydro power potential in East and Central Africa (Kenya, Tanzania, Uganda, Rwanda and Burundi). The country has about 5GW, with only about 10% tapped.

• Tanzania has the two highest head hydro power projects in Africa. Lower Kihansi (850m) which became operational in late 1999 and Rumakali (1200m) which is studied to a feasibility level.

• Tanzania will very soon become the Electric Power Transmission hub connecting the Southern Africa and Northern African regions under SAPP/Nile Power Trade/EAC arrangements. Through this hub it is possible to sell hydro from Inga in the Democratic Republic of Cong (DRC) to Europe via Egypt and Turkey and vice versa.

At the time of writing, the Tanzania electricity generation, transmission and distribution system is mostly managed by Tanzania Electric Supply Company Limited (TANESCO), a vertically integrated Government owned Power utility. TANESCO’s existing interconnected grid system has an installed capacity of 768.7MW of which today 561MW is hydro based generation and the remaining is thermal and natural gas. The few remote and isolated areas which currently have a power supply are supplied from isolated diesel stations which amount to a total of 17MW. Some areas of the country are supplied power from neighbouring countries; Rukwa and Kagera are supplied power from Zambia and Uganda respectively. As a result of the liberalisation of the sector, an Independent Power Producer (IPP) of 100MW installed capacity generates and supplies bulk power to the national grid.

Hydro power is currently the backbone of the Tanzanian Power Generation System. As mentioned earlier, the country has a high hydro power potential (5GW) of which about 10% is exploited today from the two major rivers basins of Rufiji and Pangani, where all the existing large hydro power stations and some of the small hydro power potentials are located. Other major river basins are Kagera and Lake Nyasa.

Rufiji Basin and the Great Ruaha river system is the major source of Tanzania’s hydro power, producing about 82% of the total hydro generation. Currently, there are three reservoirs in the Rufiji Basin – Mtera and Kidatu reservoirs on the Great Ruaha river system and Lower Kihansi reservoir on the Kihansi river. Mtera dam/reservoir with a live storage capacity of 3200Mm3 was originally designed as a storage and flood control facility for the downstream regulation Kidatu dam/reservoir (live storage 125Mm3) with power generating capacity of 204MW. An 80MW hydro power station was later installed at Mtera. An 180MW run-of-river plant is also located on the Kilombero river tributary known as the Kihansi. Capacity of this station is likely to increase to 300MW in the future.

The Pangani river basin has only one storage dam/reservoir, Nyumba ya Mungu, with a capacity of about 875Mm3. It is a reservoir that regulates water for power generation at Nyumba ya Mungu (8MW), Hale (21MW) and New Pangani Falls (68MW) power stations.

Tanzania has extensive untapped hydroelectric power resources mainly located in the Rufiji river, lake Nyasa and Kagera river basins and also the Pangani and Ruvuma rivers. Identified hydro power potential sites that have been studied are presented in tables 1 – 4.

Extensive work has been done to study the numerous existing small scale hydro power potentials. Over the past few years a number of reconnaissance and pre-feasibility studies have been carried out on both potential mini and small hydro power sites. A few have been studied up to feasibility level.

Potential small scale hydro power sites are situated in remote isolated areas, with their development expected to serve as an engine towards economical and social development of the remote/local Tanzanian communities which are supplied with power by isolated diesel stations. The majority of the Tanzanians have no access to electricity; only about 10% of the entire Tanzanian population has electricity services. The remaining get locally available traditional energy (biomass) which accounts for 90% of energy consumption in the country. It is estimated that there exists about 300MW of small scale hydro power potential in total scattered around the country. See table 5 and figure 1 for further reference.

Operation of diesel stations in the remote isolated systems depends on the expensive imported fuel which is a cost to the national economy. This fact opens a challenge to develop small hydro power to supply cheap and environmentally friendly electricity to the isolated communities.

The government underscores the advantages of investing in hydro electricity generation for those sites which have been evaluated and proved to be viable. Following the recent/on-going reforms of the power sector (trade liberalisation, opening doors to private investors, privatisation of public utilities, etc) it is anticipated that private firms will also increase their interest to invest in hydro-electricity generation. Table 5 shows the existing listing of identified small hydro power potential in the country.

The government policy on small hydro power is to develop small sites in areas which are not supplied with power from the National grid or to replace diesel generation in isolated areas. Based on this policy, several small scale hydro power development activities have been initiated by the government in cooperation with local and foreign agencies. On-going development activities in small hydro development range from site identification, pre-feasibility/feasibility studies.