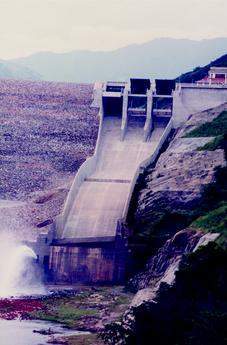 Sri Lanka’s practice of harnessing water resources for irrigation and water supply dates back more than two thousand years. The ruins of thousands of reservoirs and the existence of over 25,000 reservoirs of various capacities in operation at present are evidence of the ancient hydraulic civilisation which existed in the country. Some of these old reservoirs have been incorporated in recent large scale water resource development schemes, like the Mahaweli power and irrigation development project, currently the largest water resources scheme in the country.

The second largest project after Mahaweli is the Samanalawewa hydroelectric scheme, which includes a 100m high rockfill earth core type embankment dam. Samanalawewa is among the few recent additions to the two thousand year old embankment dam record of the country.

Built across the river Walawe, one of the five main rivers in Sri Lanka, Samanalawewa dam is situated near the town of Balangoda about 160km south east of the capital Colombo. It is a key element of the 120MW Samanalawewa hydroelectric project implemented to harness the hydro power potential of the Walawe.

The initial planning of this project dates back to 1950s, with project construction works commencing in 1986 when financing was received from the governments of Japan and the UK.

The reservoir created by the dam has a total live storage capacity of 218Mm3 out of 278Mm3 total gross capacity. The balance 60Mm3 is meant for dead storage. At its full supply level of el 460m above mean sea level, the U-shaped reservoir spreads to a distance of 8km upstream along two limbs, in the streams Walawe and Belihul.

The other elements in the project are a 5.35km long head race tunnel, 840m long steel penstock, surface power station housing two 60MW turbine-generator units, and a 650m long tail race canal. The project is designed to generate 403GWh of energy annually and the plant has been generating power since its commissioning in October 1992, amidst the leakage problem which developed in the reservoir due to the adverse geological conditions prevailing in the right bank. The details of the leakage problem are however not discussed here.

Samanalawewa dam is located just down stream of the confluence point of Walawe river with one of its tributaries, Belihul oya. The dam, with a length of 530m at crest level, sits in a slightly asymmetrical V shaped valley. The left abutment of the valley slopes at approximately 26˚ while the right bank slopes at the 29-33˚ range. The width of the dam varies from 10m at the crest level to about 400m at the foundation base level. The designed inclinations of the upstream and down stream sloping faces of the dam are 1V: 2.0H and 1V:1.8H respectively. The total fill volume of the dam structure is about 4.5Mm3.

Geologically the project site lies in the highland series of the Sri Lankan Precambrian complex comprising Metamorphic rocks which have been folded in to form the Balangoda syncline. The dam site lies on the northern limb of the syncline with the left abutment, valley floor and the lower half of the right abutment comprising calcareous gneisses while the upper half of the right abutment is comprised of granulitic gneisses.

The left abutment consists predominantly of Charnokitic gneisses. However these Charnokitic are overlain by garnitiferous granulite in the foundation area upstream of the dam axis. On the right abutment, the general geological sequence of garnitiferous granulite calcareous gneiss, fault zone and granulitic gneiss outcrops from river level towards the top of the slopes, with the 20-30m wide fault zone dipping in to the abutment at an angle of 40˚ to 60˚. This general sequence has also been complicated by the secondary folding and faulting.

In the calcareous gneiss the crystalline limestones have been exposed in the exploratory adits, which continues, fresh and tight except where they occur close to fault zones. In this area solution features and a number of cavities were found. These were sealed with concrete.

Excellent rainfall records were available in the project area. Daily and monthly rainfall data were available at 11 stations in the vicinity. The catchment area at the dam site is 372km2. Mean rainfall into the Samanalawewa catchment area has been estimated based on the records available from neighbouring areas for the period from 1921 to 1974 and has an annual average value of 2867mm. Heavy rainfall generally occurs in the months of April and May (South west monsoon) and in months of October and November (North east monsoon).

The mean values of river flow at the dam site for the period 1940 to 1983 have been used in the planning. The annual average river flow at site is 17.8m3/sec and the minimum flow recorded is 3.5m3/sec.

Based on the sediment sampling data obtained on site during October 1985 to September 1986, and flow measurement records, annual sediment yield at the dam site has been derived as 338m3/km2. Thus for the total catchment area of 314km2 and for a design life of 100 years results, the total sediment load is 12Mm3 which can be easily accommodated in the provided 60Mm3 dead storage.

The dam embankment consists of a central earth core, graded filters on either sides of the core followed by supporting shoulders of rock fill material.

It has been designed to meet the operating conditions in Table 1.

The dam embankment stability has been assessed against slope failures of both upstream and downstream slopes. The minimum recommended factor of safety values and the values derived in the design are given in Table 2.

The dam’s central earth core of silty clayey sand is protected on its downstream side by a fine sand filter, a coarse gravel filter and a transition zone. An intermediate filter and a transition zone protect the upstream face. The predicted theoretical settlement of the core zone is about 1.5m at the dam’s greatest height above the riverbed level. This value has been compared with the post construction settlements of rockfill dams with similar characteristics to those of Samanalawewa. To compensate for this settlement the core profile has been overfilled.

On completion of the construction works, one of the diversion tunnels was converted to install the bottom outlet of the reservoir while the other tunnel is permanently plugged.

As a seepage control measure, a grout curtain has been constructed in the right abutment through four horizontal adits driven into the right abutment along an extended dam centreline. These four adits, lying in a vertical plane at approximately 25m spacing, provided valuable information on the complex geological conditions prevailing in the abutments and also helped in planning the drilling and grouting works. The grouting was carried out in split spaced and in several stages, taking down to rock with permeability values less than 3 Lugeon.

Seepage through the dam foundation and left bank have been controlled by a conventional grout curtain taken into rock with low permeability (Lugeon value< 3). For this purpose a grouting gallery, running underneath the whole length of the embankment, has been provided. The main advantage of the use of the grouting gallery is the facility to detect and respond to unforeseen seepage paths. In such situations additional grouting or drainage work can be implemented even after impounding. The grouting gallery also enabled the construction of the grout curtain to proceed independently of the construction of the embankment. This gallery is also provided with a number of standpipe piezometers to monitor the water tightness of the dam foundation and abutments.

The spillway of the dam is of gated overflow chute type designed to pass the 1 in 10,000 year flood of 3600m3/sec and is located in the left abutment of the dam. It is fitted with three 11m wide 14m high automatic tainter gates (radial gates). These gates called ‘Gibb’ gates have been successfully installed and are in use in Victoria and Kukule dams, Sri Lanka. The speciality of this gate type is its ability to open during a flood even without the power supply and/or in the absence of operators. The three gated openings connect to the chute and a flip bucket is provided to direct the flow to the plunge pool. The plunge pool is excavated in the solid rock. The bottom lip of the flip bucket is tilted towards the dam to direct the nappe into the plunge pool while reducing the impacts on the left bank.

The design of the spillway was confirmed by model studies performed on a 1:60 scale model built at the hydraulic research laboratory of the Irrigation Department, Sri Lanka.

The dam is provided with a bottom outlet to be used in the impounding of the reservoir and also in emptying in the case of an emergency. This is by means of a 2m diameter steel pipeline extending up to the downstream face of the dam and installed in one of the diversion tunnels (tunnel 1). At the downstream end of the pipeline a hydraulically driven Jet flow gate with a maximum discharge capacity of 70m3/sec at full supply level is provided for the discharge regulation. There is also a small bypass line fitted with a Howell-Bunger valve for releasing compensation discharge for downstream irrigation works.

The Samanalawewa dam is provided with a comprehensive system of measuring instruments to monitor its behaviour during operational life. These instruments are mainly located in three vertical cross sections of the dam, one towards the middle of the dam, above river bed level, and the other two towards the left and right abutments. The continued monitoring will help to verify the behaviour of the dam and its foundation are in conformity with the design criteria. Table 3 gives an account of the instruments installed in the dam.

The instruments mentioned in Table 3, supplied by soil-instruments, UK, have been in use since impounding and they provide valuable information on the dam body behaviour. So far, the observed monitoring results are in conformity with the design criteria.