A mechanism for local ownership 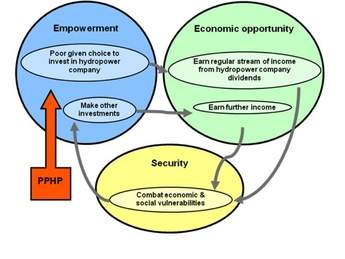 In theory, Nepal has more than 6000 rivers and rivulets with the potential to produce as much as 83,000MW of electricity. Unfortunately for decades the Nepalese have only seen these figures on paper, as Nepal still reels from the lack of policy, infrastructure, commitment and attitude fundamental to exploiting this potential for the benefit of the majority of the population. Despite this lack of progress, there have been considerable developments in the hydropower sector, the majority of which have been supported by external funding from either donors or lenders.

In the last decade or so, the poverty indices have shown positive trends in numbers below the poverty line dropping more than 10% from 1996. But, has the situation really improved for the general public and the needy? Figure 1 shows that the situation of the so called ‘poorest of the poor’ has not improved when figures are examined over two decades. In fact, what becomes very clear is how the situation of the poor of Nepal has roughly stayed the same whilst at the same time the status of the wealthy has increased over threefold. The question remains – could the immense hydropower potential in the country reduce this poverty and how can this wealth be distributed more evenly between the rich and poor?

Bilateral donors and NGOs have a significant track record of promoting hydropower projects in Nepal. But under the present modalities of investment, the interventions in hydropower development have not been able to benefit the poor (economically) – with the rich seemingly benefiting the most when well designed and built, commercial power projects have proved to be very profitable. Nevertheless, during the process and as a result of these projects, the poorer people living near these projects have enjoyed some social benefits – rural electrification, basic infrastructure (roads, water supplies, bridges etc), some employment, training, irrigation etc.

Nepal as a whole has benefited from electricity generation, and a number of institutions have developed and are working to further promote hydropower development. However, these projects would better meet the needs of the poor and be a means for poverty alleviation, breaking the vicious circle of development, if the poor actually gained more directly from the wealth generated from their rivers. This is the basic guiding principle behind the development of pro-poor hydropower concept.

Pro-poor hydropower (PPHP) is a concept by which the rural poor of Nepal are facilitated into profitable ownership of their water resources. This is achieved through the development of commercially profitable and socio-ecologically acceptable hydropower projects, with the local poor gaining significant ownership of these schemes. They also reap any economic benefits, particularly the profit generated by its commercial operation.

Significant ownership is defined as ownership of shares which earn dividend that represents a sizable earning when compared with the household’s other earning streams. Achieving this ‘significant’ ownership can be realised either through the local poor owning a majority of a small project (‘pure’ approach) or through the local poor owning a small part of a big project (‘dilute’ approach) – or a sliding scale inbetween.

The direct project goal of PPHP is income generation through facilitating the rural poor of Nepal into the profitable ownership of their local water resources.

The key outcome of a successful PPHP project will be that a large part of a particular community – particularly the poor– will have significant ownership in a profitable hydropower company that uses that community’s river for hydropower generation. They will then receive regular and long-lasting cash income through dividends from their ownership. The community will also receive many spin-off benefits, such as having its awareness raised on various social and economic issues, training, jobs during construction, infrastructure, and some rural electrification (remembering that this is not the main purpose of the project) as well as skills to create small enterprises.

Under the pro-poor hydropower concept, local poor people are given the opportunity to invest in a hydropower company. The initial investment required for the rural poor to gain significant ownership in a hydropower project will be too high. Generally, the local poor have nothing to invest except their own labour. Normally in hydropower projects, there is a labour component of around 10-20% to the total costs. The mechanism by which the local poor attain ownership is by building upon this labour component of the project’s construction and operation. In PPHP, opportunities for the local poor to be employed on the project are maximised. Their labour is paid for in both cash and equity (shares). The labourer earns shares by sacrificing part of their wage.

This wage sacrifice can be then multiplied through a levering grant and/or soft loan facility. For each share that is earned through labour contribution, a certain amount of shares can be purchased through a grant (from donors). Another few shares can be purchased through a soft loan facility, which may be invested as a debenture in the project in order to give the local poor early return on at least part of their investment. The exact balance between the wage sacrifice, the grant and the soft loan will depend on the actual size of the local labour component in each project. The grant facility will likely not exceed 15% of the total hydropower project value.

The local non-poor (who will generally be unwilling to contribute labour) will also be facilitated to purchase shares in the project.

Ensuring participation of the local poor

PPHP’s greatest test will not be technical. It will be in actively involving the local community, particularly the poor and working with the community in managing and organising their investment. It will always be a developmental challenge to implement a new concept especially when it deals with relatively new ideas of sweat equity, wage sacrifice and shares.

PPHP will work closely with the local community to raise awareness about the PPHP concept, and to mobilise them into groups. The community mobilisation process is the core to the successful testing of the concept. All the major decisions related to the investment by the local community including who shall be defined as poor, and hence be entitled to participate in the shares-for-labour, grant and loan scheme would be taken through consensus during the community mobilisation process. The poor, as defined by the community, will then receive the training they will need to contribute their labour input in the project. Through the community group formation, special emphasis will also be put on women’s involvement and empowerment. As a target, at least 50% of the participants in the community groups should be women. As an inherent objective of the project, the local community will have capacity built to use their groups formed during implementation of PPHP to initiate and run other community development activities, based on their own needs.

In order to fully test the PPHP concept, a pilot project is being implemented. Lessons learnt will then be applied to future projects. Currently, the People, Energy and Environment Development Association (PEEDA) is on the verge of implementing the PPHP concept within the 20MW Nyadi hydropower scheme in Lamjung district. This is being developed by a consortium with the lead developer being Butwal Power Company (BPC). PPHP will be a small component of this project, facilitating the locals into ownership of 3% of shares and as such is being implemented in a ‘dilute’ approach.

PEEDA, a Nepali NGO, is the principal coordinating organisation and will take the responsibility for implementing PPHP in the pilot project. PEEDA’s focus will mainly be on community involvement and it has partnership with various international NGOs to receive capacity building through this project. Lamjung Electricity Development Company (LEDCO) has been selected and is working as the local partner organisation to carry out the awareness raising and mobilisation of the community.

Nyadi Hydropower Limited (NHL), which is the commercial hydropower developer, is responsible for ensuring that the hydropower is developed on a professionally commercial basis. NHL will take care of the technical, legal and business aspects of the hydro scheme.

The project has been funded primarily through the Norwegian Government Development Agency (NORAD). Initially, this was through The Norwegian Himal Asia Mission (Tibetmisjonen), but currently the funding is through The Royal Norwegian Embassy. This funding is for the development and preparatory implementation phases for PPHP in the Nyadi Hydropower Project. Nyadi Hydropower Limited is also providing a proportion of the PPHP project funding.

PPHP has undergone a long process of definition, design and refinement and this process will continue on for the entire Nyadi pilot project period. Due attention and care has been given to the hydropower development issues and prevailing political, financial, socio-economic and natural environmental condition of the country. PPHP is in line with the recent developmental trends in Nepal:

• Social inclusion – reaching out to all people in the community during community mobilisation (awareness raising, group formation, skill training) and equal opportunity for participation in the PPHP pilot project in Nyadi.

• Conflict sensitivity – transparent management, inclusiveness as well as individual and institutional empowerment which are all key to conflict prevention.

• Environmental concerns –EIA and mitigation programmes are integral to the planning and implementation of the hydropower project.

Implementation of this concept has not come without its share of challenges. Some of these include:

• Changing the traditional mindset of rural people so that they understand shared ownership and long term investment.

• Increasing the skills of the poor to be able to contribute skilled labour.

• Building the capacity of the poor to invest cash and labour in the local hydropower company.

• Managing the debentures and/or dividends.

Implementation of the PPHP concept is very challenging. However, a successful outcome will be a win-win situation for both the local community as well as the commercial developer. Optimistically, the lessons learnt in Nyadi could have wider replication of this concept in Nepal and abroad.

The authors work for the People, Energy and Environment Development Association in Kathmandu, Nepal. Email:gaurav@peeda.net

The People, Energy & Environment Development Association (PEEDA) was established in 1998 by various hydropower related organisations developed by the United Mission to Nepal for the enhancement of the country’s renewable energy sector. PEEDA aims to mobilise both local and external resources to harness Nepal’s indigenous resources, thereby promoting activities for economic development and poverty alleviation. PEEDA believes that energy is the prime mover of all the activities of an individual, an economy, and whole biodiversity. The pro-poor hydropower project is one PEEDA’s current projecby ts. www.peeda.net