A gale-force boon – the economic advantages of wind energy

At the end of 2015, the UK’s wind power generation had risen by 26%. Due to higher wind speeds and increased capacity, the output of offshore wind rose even faster, jumping by a third to 17.4TWh. World Wind Technology speaks to Simon Brett, head of projects, Humber, at Associated British Ports, about the economic advantages of wind energy. 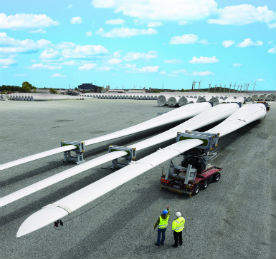 Offshore wind contributes to 5% of the UK’s annual electricity requirements, but it also blows money into the economy with developers having spent about £840 million in the last fiscal year. Ports, as the gateways to offshore farms, have attracted much of this outlay. With the Crown Estate’s third round of the developmental project soon starting in earnest, investment is about to increase in areas such as the Humber estuary, and Associated British Ports (ABP) is at the heart of this growing industry.

“The UK has had a very pro-renewables policy that has attracted developers,” says Simon Brett, head of projects (Humber) at ABP. “So far, our green activity has been concentrated in four ports: Barrow, Hull, Grimsby and Lowestoft.”

To allow large transport ships to deliver nacelles, rotors, towers, blades and foundations, installation bases also require deepwater berths, ideally with minimal restrictions on vessel size, draft and beam. Additionally, the port should be as close as possible to the intended farm location.

Needs tend to be slightly different for O&M. Location is even more important and operators only require light, shallow draft crewboats to transfer technicians to the close inshore farms. That makes smaller harbours a viable option.

“For O&M, distance means time and time is money,” says Brett. “They don’t usually need such large areas of land, and they are generally looking at a port as close as possible to their wind farm.”

The need to minimise distance has seen O&M bases being built along the English and Welsh coastlines. Grimsby and Barrow are perfect examples. “In Grimsby, we’ve built O&M facilities, working with Centrica, EON, RES and DONG Energy, which have chosen to make Grimsby the home for their O&M support in the UK,” Brett says. “They opened a new facility there at the beginning of last year.”

Other desirable local attributes include a trained workforce and relevant local suppliers. ABP’s offshore support site in Grimsby ticks those boxes with established infrastructure for marine engineering and safety, slipway companies and a host of local engineering suppliers. Refineries and other industries provide a pool of skilled staff.

DONG Energy has built three O&M bases at ABP’s Barrow-in-Furness harbour, one for each of its farms in West of Duddon Sands, Barrow and Walney. Extensive marine work at the ports includes pontoons and pontoon moorings, and brows and brow-support structures. As Crown Estate’s third round expansion ramps up, hitherto largely undeveloped sites are also starting to benefit from the boom. RWE confirmed late last year that it would use ABP’s Lowestoft operation to build its 336MW Galloper offshore wind farm.

ScottishPower Renewables has also signed a 30-year deal with ABP to use Lowestoft as a base to construct its East Anglia One farm. Once the farm is running, Lowestoft will be the operations and maintenance hub. Millions will flow into the local economy from these projects. The ScottishPower deal will create 100 direct full-time jobs, as well as thousands of roles within the supply chain. The deal will be worth about £25 million over the wind farm’s lifetime. Again, Lowestoft’s location has been the overriding factor in that decision but, for installation and component manufacturing, choosing a site can be more flexible. That means there is competition between different port owners in the UK and countries such as Germany, Denmark and the Netherlands, which have the North Sea as a border.

“We’re in a much bigger European marketplace, so it’s possible to choose other locations in Europe, and move component parts between the factories and installation facilities,” says Brett. “There has been a concentration of investment by companies in certain European locations, for example, by Siemens in Hull and Cuxhaven.”

However, Brett makes the point that there are few ports in the UK that offer space, facilities and location to suitably serve large-scale manufacture and pre-assembly needs. DONG Energy decided to base its installation facilities for the Ormonde farm in Belfast’s Harland & Wolff yard, even though the farm’s site is only six miles off the coast of Cumbria.

“Barrow doesn’t compete with Belfast for installation because the facilities that are available in Belfast cannot be replicated in Barrow,” Brett says. “There are actually not many options for pre-installation ports in the UK. You have to get all of the requirements coming together: deep water, land and unrestricted berth.”

Added to that, one of the biggest determining factors is still where to run an installation craft from. “That will usually be the closest suitable port, though ideally it would be directly from the factory,” says Brett.

The Humber estuary ticks all of these boxes: ample room, deep water and, soon, plenty of suitable dockside space – all within 12 hours’ sailing time of three major Round 3 wind farm zones. ABP has two of its flagship wind locations here at Grimsby and Hull, with two other ports in operation at Goole and Immingham.

DONG Energy’s announcement in February that it will build the massive Hornsea Project One offshore wind farm will bring even more investment into the area. At 1.2GW capacity, Hornsea will become the world’s largest offshore wind farm by a considerable margin.

The Humber is also the location for Able UK’s long-planned Marine Energy Park. With a potential £450 million investment by Able, the park will offer around 900 acres and 1,300m of new deepwater quays – if and when completed. The hope is to attract suppliers to create a dedicated cluster for installation and O&M work.

DONG Energy signed a memorandum of understanding to use Able’s Marine Energy Park last year. At the moment though, the best example of this kind of integrated operation lies on the other side of the river at the groundbreaking ABP/Siemens development in Green Port Hull.

“Siemens will manufacture blades in Hull, and we are developing a pre-assembly harbour,” says Brett. “The nacelles will be made in Denmark and Germany and the towers in Spain. They will all be fed into Hull and put together using the pre-assembly harbour.”

As well as significant support from the Regional Growth Fund, ABP and Siemens are jointly investing £310 million in the Green Port Hull project, working with Hull City and East Riding Councils and other partners. The Alexandra Dock blade factory is the catalyst, but the partners are also seeking to locate other parts of offshore wind supply chain.

With Siemens already named preferred supplier for Hornsea’s 7MW wind turbines, the huge 75m turbine blades will be some of the first to come from the new Hull factory when it starts work early next year.

“Green Port Hull is by far the biggest single investment we’re making,” says Brett. “We’re heading down the closing straight on target for 2017.”

Work at the site is proceeding fast, with a million cubic metres of sand pumped into the dock to fill a third of the old harbour. This reclaimed land will house the new quayside and component storage areas. There will be a new quay wall, an anchor wall and a roll-on-roll-off ramp.

As well as manufacturing, Siemens is building assembly, logistics and servicing facilities employing 1,000 people. Recruitment for these posts is under way.

“For the Hull factory, the availability of local labour is important, but it’s not as important as the deepwater port requirements,” says Brett. “For O&M in Grimsby, the companies were able to go out and buy labour on the local market. In Hull, Siemens are embarking on a major training programme to provide the staff that they are employing with new skills.”

Offshore wind will deliver 10% of the UK’s power needs by 2020, with at least another 10GW to be added in the coming decade. That means even greater reliance on harbours as the industry spends billions to crank up installation and build O&M facilities. With most of this investment passing through the docks, wind’s partnership with Britain’s ports is proving rewarding for both parties.