Managed by Investec Asset Management, the Emerging Africa Infrastructure Fund (EAIF) is helping to finance renewable energy, including hydropower, in the continent 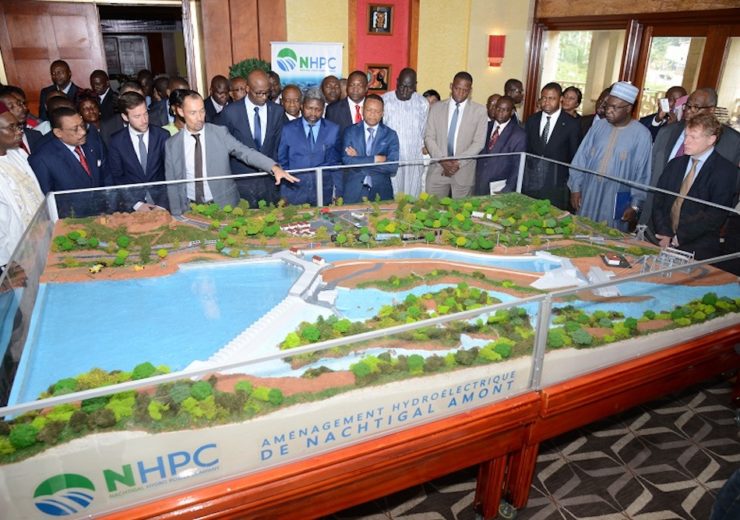 Model of the Nachtigal project in Cameroon (Credit: NHPC)

Martijn Proos from the Emerging Africa Infrastructure Fund (EAIF) provides details on the fund’s investments in hydropower projects in Uganda, Tanzania and Cameroon

The Kagera River flows between Uganda and Tanzania and marks the international border between the two nations. At Kikagati, on the Uganda shore, a 14 megawatt (MW) run-of-river hydroelectricity power station is being built by Kikagati Power Company Limited (KPCL), a company sponsored by Berkeley Energy.

When completed, the plant will send 50% of its output to the Ugandan grid and 50% will go across the river to Tanzania. International cooperation between KPLC and governments of Uganda and Tanzania gave the project political and economic viability.

KPCL’s plant will consist of an 8.5m high dam of 300m in length, associated earthworks , three turbines, control and plant rooms and allied infrastructure connecting the plant to switchyards in Uganda and Tanzania.

Around 250 people are involved in construction work. Once operational, some 10 permanent staff will run the plant.

The combined populations of Uganda and Tanzania is just over 100 million people. Tanzania’s electrification rate in 2017 was 33%, with Uganda coming in at 20%.

Uganda has a young and rapidly growing population and one of the world’s highest birth rates. Tanzania’s demographic profile is similar.

That there is a need for power and growing demand for it is not in doubt. Nor is there any doubt that the future political stability and economic success of Uganda and Tanzania requires significant investment in energy infrastructure to stimulate business, provide jobs and help alleviate poverty.

World Bank estimates say that Africa needs around US$100 billion of infrastructure investment to raise productivity by 40% and average GDP by 2%. Reaching to achieve those figures is a truly international effort. Africa itself can’t supply all the necessary capital and it’s not just capital that’s needed but long-term capital (often now called “patient capital”), which is often not available in local capital markets.

One of the two providers of KPLC’s $54 million debt package is the EAIF (the other is the Dutch development finance bank, FMO).

a prime example of long-term lender

EAIF is a prime example of a patient and focussed long-term lender. It can afford to be because it’s part of an international organisation called the Private Infrastructure Development Group (PIDG).

PIDG is funded by six governments – the UK, the Netherlands, Switzerland, Australia, Sweden and Germany – and the International Finance Corporation on behalf of the World Bank. PIDG’s role, exercised through its component businesses like EAIF, is to deploy public capital to mobilise private capital.

Most development finance institutions rely solely on capital supplied by governments. EAIF raises its capital from governments and the private sector. Most recently, in 2018, EAIF raised $385 million in new debt. $100 million of that came from Allianz, one of the world’s leading insurers and asset managers.

At the same time, Standard Chartered Bank increased and extended its lending to EAIF to $50 million. Allianz and Standard Chartered have chosen in EAIF a fund that not only has the experience of supporting nearly 80 infrastructure projects in over 20 African countries, but one that is entirely focussed on being a debt supplier to African infrastructure projects.  Having a singular purpose is a singular asset.

EAIF, where the equity holders are the UK, the Netherlands, Sweden and Switzerland, has been in business since 2002. It can lend up to approximately $65million per transaction (occasionally more) and can operate in all African countries and parts of the Levant. It is empowered to lend in nine infrastructure sectors.

PIDG and EAIF have the same core mission:  to “combat poverty in the poorest and most fragile countries through pioneering infrastructure to help economies grow and change people’s lives.”

Like any other commercial lender, EAIF expects reward for lending its capital. One of the distinguishing characteristics of EAIF is its flexibility. So not only is it a patient lender, it can be flexible in areas like length of loans, repayment profiles and grace periods.  The approach is often attractive to developers.

In some countries the energy sector suffers from regulatory inefficiencies, weak billing processes and ageing distribution networks. Not all states have all these problems, though all have some.

It takes tenacity by developers, operators and builders to overcome construction and operation challenges. For funders like EAIF it takes not only robust commercial realism when lending in frontier markets, but also an operating culture that sees the relationship between lender and borrower as one of partners in endeavours that can produce lasting economic and social benefits in parts of the world most in need of stability and progress.

The fund has been a pioneer of the renewable energy sector in Africa and backed some of the earliest commercial solar plants on the continent.

In Uganda, it has now backed ten renewable energy projects in hydro and solar, demonstrating the benefits of replicating experience, financial structures and legal documentation.

To date, 138MW of renewable generating capacity in Uganda has been financed by the EAIF, representing a total investment of $126 million. EAIF and FMO are jointly lending $29.3 million of Senior Debt with a 12-year term to refinance the 13MW Bugoye hydroelectric power plant in Western Uganda.

The plant, which has 98% availability, has been producing electricity since 2009. It feeds power into Uganda’s national grid. The refinancing was used to repay EAIF the balance of its original loan to build the station, fund repair works, and repay construction loans made by the project sponsor.

Bugoye’s power is fed via a 33KV transmission line into the grid at Nkenda Substation, located 6km from the plant. The facility has three intake points at River Mubuku, River Isya, and the Mubuku I hydropower station tailrace.

The water canal runs along the hills of Mubuku and water flows by gravity from the intakes towards the penstock. In another partnership in Uganda, EAIF and FMO loaned $10.2 million to Lubilia Kawembe Hydro, which was commissioned in June 2018.

It is located at the foot of the Rwenzori Mountains in Western Uganda and serves the equivalent of 256,000 people. It has an annual avoided GHG rate of 11,000 tCO2.

Cameroon is home to one of the largest renewable energy projects EAIF has backed in its 18 years of life.

The fund has loaned €50 million to the €1.26 billion Nachtigal hydro project on the Sanaga River. Currently under construction, the plant will have an installed capacity of 420MW and supply Cameroon’s Southern Interconnected Grid.

One hundred percent of the station’s output is to be bought by the country’s privately operated national utility, ENEO, under a 35-year availability-based take or pay power purchase agreement.

The Nachtigal Hydro Power Company (NHPC) is a private business set up to build, manage and run the Nachtigal power plant. It is owned by the Republic of Cameroon, EDF International and the International Finance Corporation.

NHPC raised €916 million of debt from 15 lenders. As one of the most experienced providers of debt finance to the renewable energy projects in Africa, EAIF was able to move quickly to evaluate the project and meet a potential shortfall in the debt funding.

Nachtigal is a run-of-the-river facility that includes a:

Nachtigal’s head-of-water viability is provided by the Lom Pangar dam, which is located further upstream.

EAIF, PIDG and the EAIF team at Investec Asset Management are all in the same business. Their job is to deploy capital – a blend from public and private sources – in ways that contribute to transforming economies and lives.

There is no prescription for doing this that applies to every emerging economy in Africa. They differ hugely in size, history, wealth, human and physical resources, political stability and economic structure and infrastructure needs. Where there is abundant water and sun, hydro and solar have their chance to shine.

Climate change is a challenge for EAIF as it is for all African nations. Increasingly, EAIF will focus on renewable energy and ensuring that where conventional fuels are deployed that power plant operators deliver on their environmental obligations.

The sensitivities of water use in Africa are well known to financial and development institutions working on the continent. EAIF’s clients in the hydro sector have to demonstrate that developments will comply with the fund’s rigorous polices on economic development impact, environmental best practice, employment terms and conditions and health and safety.

Developers, equipment suppliers, utilities, plant operators, finance providers and governments in Africa and globally need to support technical and financial innovation if water is to continue to sustain human life in Africa and deliver energy.