In light of recent safety-related incidents at dams, should the industry be moving towards performing periodic comprehensive reviews to evaluate the safety of these structures? 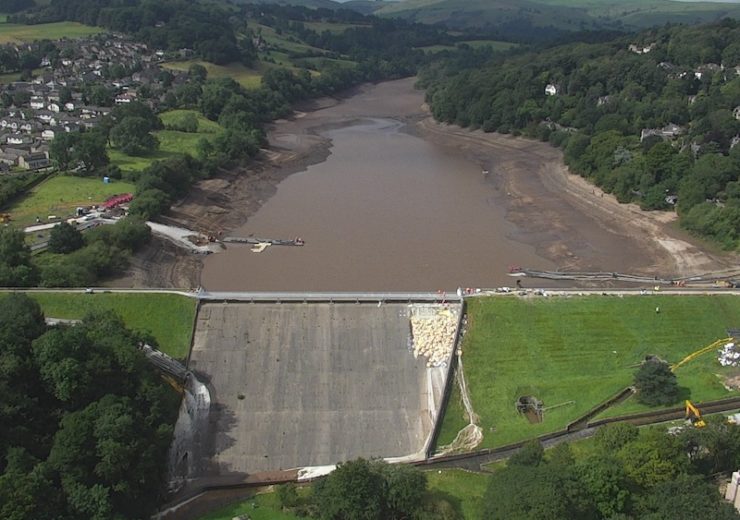 An aerial shot, taken by a DJI drone from afar, gives an overview of the situation at Toddbrook reservoir. The bags of aggregate can be seen to the right of the dam

Public interest in UK dam inspections gained momentum rapidly in the wake of the recent Toddbrook reservoir incident. Following heavy rainfall in August 2019, damage occurred to the dam’s auxiliary spillway, prompting the evacuation of more than 1,500 residents from the town of Whaley Bridge in Derbyshire.

Following intense press scrutiny, some of which implied local residents had previously expressed concerns about the condition of the reservoir and dam, the latest dam inspection report for Toddbrook was made available.

The Canal River Trust which manages the facility said that it had followed the lead of the Environment Agency by releasing the report in October 2019.

Circulation of the document, however, led to greater speculation and even accusations of a cover-up: Large sections of information had been redacted in what has been described as a “ludicrously heavy-handed” way.

As the Canal and River Trust explained: “For national security reasons laid down by the Environment Agency, the regulator in England and Wales, the report has had to be heavily redacted. We understand the frustration but are obliged to follow national guidelines on this which are exactly the same for any other of the nation’s 2000 plus reservoirs.

“However, we want to reassure people the report did not identify the need for any immediate repairs to the spillway. We remain committed to being open and have just organised a series of public open days for local residents to visit the dam and find out more.”

The Trust went on to describe how it has an experienced team of specialised reservoir engineers to manage its 72 reservoirs.

Visual inspections are carried out twice a week by Trust operatives, the reservoirs are rigorously inspected twice yearly by its own reservoir engineers, as well as undergoing detailed inspections every 10 years by an independent government-appointed inspecting engineer.

As the Trust said: “These inspections consider the best industry-wide knowledge regarding dam construction and stability. We prioritise spending money on reservoirs wherever a need for maintenance work and/or repairs is identified.”

The last independent inspection of Toddbrook reservoir and dam was carried out in November 2018. The report concluded that:

The Trust commissioned an independent inquiry into what caused the damage to the auxiliary spillway and also assisted with a government-commissioned review.

Assessing the roles of dam operator and inspector

As well as investigating the possible causes for the damage caused by the incident, the government said it will assess the roles of the dam operator, inspectors and regulators in the management of Toddbrook reservoir.

It will consider any lessons to be learned and new or improved guidance to inspectors (supervising and inspecting) that will improve the operation, maintenance and inspection of similar structures going forward.

Both reports will guide the long-term repair of the dam.

Some industry insiders believe that the Toddbrook incident may prompt a broader focus on the state of UK infrastructure in the face of climate change, with calls for climate-resilient infrastructure to be put at the top of the government’s spending list.

Shadow Minister for Flood, Luke Pollard, said in August 2019 that the Toddbrook incident was “unprecedented”. He said that it should act as a wake-up call to the government on the urgency of preparing for the inevitable impacts of climate change and investing in adaptations for the UK’s critical infrastructure.

Dr Helen Gavin, from the Oxford Martin Programme on Integrating Renewable Energy, said that existing maintenance and inspection regimes were suitable for the conditions in which they were created but, with unprecedented weather in the form of extreme storms and climate events, much more stress is being put upon built infrastructure assets.

“This is in addition to increased demands on assets, arising from higher levels of usage,” Gavin explained. “Therefore, it is prudent to check the frequency and extent of inspections, changing them where necessary, to pick up early signs of stress and deterioration given the conditions that are now being experienced.”

“Our infrastructure is now under much bigger pressure from the changing environment,” said Dr Mohammad Heidarzadeh, Head of Coastal Engineering and Resilience LAB at Brunel University London. “I believe that we need a new approach to, first, update the inspection guidelines, second, re-assess the design of infrastructure and improve their load-bearing capacities if needed, and third, to increase their resilience to combined multi-hazards.

Dam failures and incidents can often be caused by critical flaws in design or construction or through deterioration that is not always visible during a dam condition inspection.

Mark E Baker, Principal Civil Engineer at DamCrest Consulting in the US, says that to address such risks the dam safety industry has been moving towards performing periodic comprehensive reviews to evaluate the safety of dams.

Contributing to the Lessons Learned from Dam Incidents and Failures website, Baker believes that dams should be thoroughly assessed for risk using a periodic risk review process. This should include:

The completed review supports a case for taking risk-informed actions at individual dams, Baker said, adding that these are being performed by the US Bureau of Reclamation, the US Army Corps of Engineers and Tennessee Valley Authority amongst others.

Ryan Schoolmeesters is a dam safety engineer with Colorado Division of Water Resources. Contributing to case studies on this same website which is hosted and maintained by the Association of State Dam Safety Officials (ASDSO), he explained that routine inspections at the Marshall Lake Dam in Colorado were “relatively uneventful” in the early 21st century.

Originally built in 1885, the 732m long high hazard earth embankment dam was raised to 23m in height in 1907. The only noteworthy comment in inspection reports highlighted a persistent depression occurring near station 4+00 but, according to Schoolmeesters, this had been “consistently attributed to vehicle rutting damage”.

Schoolmeesters said that the movement resembled a rotational slope failure and was most significant near station 4+00 where the dam crest depression had been observed.

This information prompted a comprehensive review of the dam’s history and revealed “unsettling events”. In total, five slope failures had been recorded from 1910 to 2010.

Such a comprehensive detailed historical review of the dam exposed information not previously known to the current consulting and regulatory dam engineers responsible for oversight of the structure.

Schoolmeesters said that this provided a better understanding of the embankment construction methods, highlighted the long history of embankment instability, and revealed outstanding and unresolved dam safety concerns.

As a consequence, the current dam owner implemented a focused long-term monitoring programme.

“Without the comprehensive review, the minor dam crest depression and embankment movement might have continued to be brushed aside as a “normal nuisance condition”, Schoolmeesters concluded, “which might have paved the way for another, and potentially more devastating slope failure at Marshall Lake Dam.”

Understanding the underlying causes for dam incidents and failures can help to minimise future occurrences. However this can often be hindered as historical information can be scattered, incomplete, missing and sometimes even misleading.

In 2013 this prompted a Gannet Fleming project team to compile information and led to the creation of the Lessons Learned from Dam Incidents and Failures website.

“If lessons learned and best practices are not effectively communicated,” the website states, “there is the possibility that poor practices will be repeated and preventable incidents will not be averted.”

The website’s purpose is to convey educational information in an innovative and user-friendly manner. Individual case studies and lessons learned pages summarise historical incidents and valuable information gleaned from them.