NorthMet is the first copper-nickel-platinum group metals (PGMs) mine planned to be developed in Minnesota, US. Poly Met Mining, a wholly-owned subsidiary of Canada based PolyMet Mining Corporation, is the owner and developer of the project.

Located within the Duluth Complex in northeastern Minnesota, the NorthMet project represents one of the biggest untapped copper, nickel and PGMs deposits in the world.

An updated definitive feasibility study (DFS) for the project was completed in March 2018 and the company received the final key permit to construct and operate the project in March 2019.

The polymetallic open-pit mine is planned to be developed in two phases. The capital expenditure on the phase one development of the project is estimated to be £665m ($945m) while phase two is estimated to incur an additional investment of £182m ($259m).

Construction works are expected to be started after the settlement of on-going legal challenges contesting the environmental permits for the project.

The NorthMet project comprises two components, the greenfield development of the NorthMet non-ferrous polymetallic deposit and the brownfield development at the nearby Erie Plant, the former LTV Steel Mining Company’s iron ore processing facility that was acquired by Poly Met Mining from Cleveland-Cliffs in 2005.

The NorthMet copper, nickel, cobalt, and precious metals deposit lies in the Partridge River Intrusion along the northern margin of the Duluth Complex, which is a vast geological formation near the eastern edge of the Mesabi Iron Range in Minnesota.

The measured and indicated resources are estimated to be 795Mt grading 0.234% copper and 0.07% nickel.

The phase one development of the project involves the start of a 32,000 tonnes per day (tpd) open-pit mining and processing operation with the refurbishment of the existing primary crushing circuit and the replacement of the existing rod and ball mill circuits with a new, modern semi-autogenous grinding (SAG) mill, ball mill and flotation circuit at the Erie plant.

In phase two, a new hydrometallurgical plant is planned to be constructed in order to treat nickel sulphide concentrates into upgraded nickel-cobalt hydroxide and produce additional copper and PGMs.

The conventional open-pit mining method involving the drill, blast, truck, and shovel operations will be employed to extract ore from the NorthMet deposit. The mine will involve three pits, namely the East Pit, West Pit, and the Central Pit.

The run of mine (ROM) ore will be transported by a private railroad to the Erie processing plant located approximately 10km away from the mine site.

The polymetallic NorthMet ore will undergo two-stage crushing and two-stage grinding before passing through the rougher and cleaner floatation circuits for the production of copper, nickel and PGM concentrates.

Infrastructure facilities for  the NorthMet project

The electricity for the project will be sourced through 138kV overhead transmission lines from the Minnesota Power grid.

The raw water for the project will be sourced from the Colby Lake located approximately 8km south of the Erie processing plant.

The flotation tailings will be pumped into the existing tailings basin located near the processing plant. 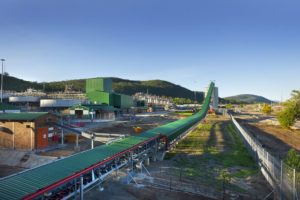