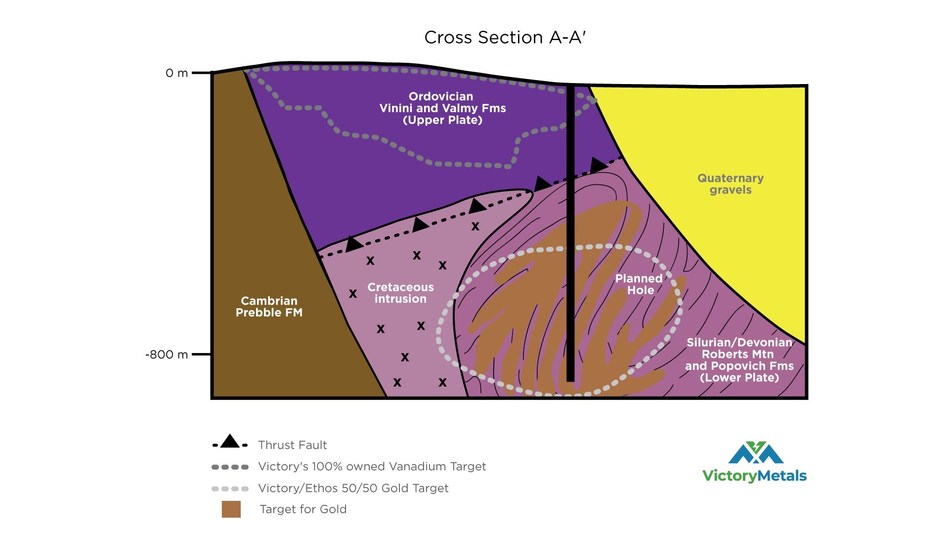 Ethos’ primary target is Carlin-type gold mineralization hosted in Lower Plate stratigraphy below the Roberts Mountain thrust fault. Some of the world’s largest and highest grade gold deposits are found in this Lower Plate stratigraphy. The Lower Plate drill target at Iron Point is immediately west of a north-south striking range front fault at between 500m and 800m depth.

The Ethos gold-focused drilling at Iron Point is now underway, supervised by Dr. Quinton Henningh. This drilling is in addition to the ongoing vanadium shallow drill program (up to approximately 200m depth) being conducted by Victory as was announced on May 27, 2019 (click here). Between both the vanadium and gold programs there are now three RC rigs and one core rig turning at Iron Point.

Iron Point is located at the intersection of the Cortez/Battle Mountain Gold Trend and the Getchell Gold Trend, and on trend from several high-grade, world-class gold mines including Twin Creeks, Getchell/Turquoise Ridge, Lone Tree-Stonehouse, and Marigold.

Ethos can earn a 50% undivided interest in the gold rights at Iron Point from Victory by spending C$5.0 million over three years, including a minimum expenditure of C$1.0 million in the first year.

Previous drilling at Iron Point by Dr. Quinton Hennigh in the 1990s intersected anomalous Carlin-type gold mineralization across Upper and Lower Plate stratigraphy near an interpreted recumbent fold hinge as well as along a range front fault. Significant anomalous gold has been sampled in surface trenches and is interpreted to be leakage from deeper levels in the system. Further, some of the strongest Carlin-type gold pathfinder element geochemistry in Nevada is present at Iron Point.

Collin Kettell, CEO of Victory, stated: “Iron Point was initially acquired by Casino Gold for its gold potential with the project representing one of the most historically active gold exploration targets in Northern Nevada. Coincidentally, dialogue with Dr. Henningh in middle of 2018 regarding deeper gold targets led to the recognition of the presence of shallow vanadium mineralization at Iron Point and the formation of Victory Metals as a North American vanadium company. We are ecstatic to have the opportunity to work with Dr. Henningh and test for deeper gold targets at Iron Point, while keeping Victory’s focus squarely on vanadium.”

Stated Craig Roberts, P.Eng., President & CEO of Ethos: “Our deal with Victory Metals was announced May 17 and we are very pleased to have advanced to the point of having drills turning by June 17. While there is considerable historic exploration work at Iron Point including multiple drill programs resulting in the definition of strong indicator element and gold geochemistry over 5 km north-south along the range front fault, to date Iron Point has not received any significant drilling to deeper levels into Lower Plate stratigraphy to test for Carlin-type gold mineralization. This drill campaign will be the first to systematically test for a deeper Carlin-type target in the Lower Plate at Iron Point. Fortunately we are able to benefit from  this substantial previous nearer-surface work in locating and orienting our planned deeper drilling. Carlin-type targets have potential for significant size and  we are excited to have now initiated this drill campaign.”

Stated Dr. Quinton Hennigh: “We have a robust drill plan prepared for testing the 5 km long gold target at Iron Point. The first two vertical holes will test the central part of the target area by cutting through highly geochemically anomalous Upper Plate rocks in search of Carlin-style gold mineralization in Lower Plate rocks beneath. Our third hole tests for similar mineralization in the northern part of the target area where an erosional window has cut down into the recumbent Zed-fold exposing targeted Lower Plate rocks. Our newly added fourth hole, vertical, is positioned in the southern part of the target area and will drill through basalt, gravel and Upper Plate rocks to test the underlying prospective Lower Plate stratigraphy. I am very happy to have this opportunity to test what is perhaps one of the best remaining Carlin-style gold targets left in Nevada.”