Venture Minerals has signed a binding terms sheet for the Riley Iron Ore Mine off-take with Prosperity Steel United Singapore. 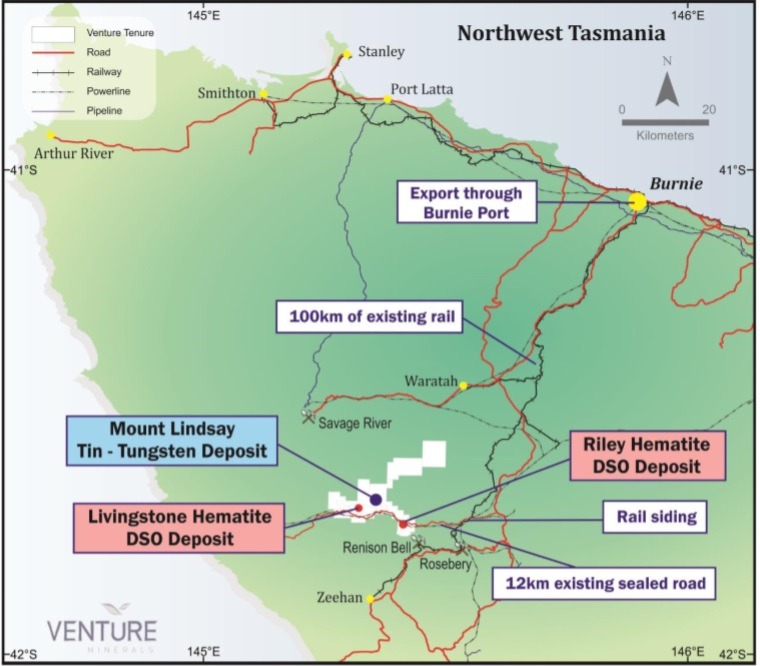 Prosperity Steel agrees to buy and receive the Riley product for 100% of the first two years of iron ore production based on reserves of 1.8Mt @ 57% Fe (table two) and a previous mining study1 (announced on 19 April 2012) which will be updated before a decision to recommence mining.. The price is based on the Platts Iron Ore Index adjusted for grade and content.

The Company has now completed a major milestone towards recommencing the Riley Iron Ore Mine since the review began in February this year. The next and final step is to update the mining study that will allow a Decision to Mine to be made in the coming weeks. Should a positive decision be made then iron ore production is expected to commence in the fourth quarter of 2019.

Venture has had the Riley Iron Ore Mine on Care & Maintenance since August 2014 shortly after it suspended operations. The current price is now over 30%* higher in AUD terms than it was upon closing. Since early last December, the 62% Fe price has risen more than 40%* in USD terms and with the recent events at Vales’ mines in Brazil the current price levels could be sustained for at least the near term.

The Company has already completed extensive pre-production work at the Riley Project putting in place all the necessary requirements to commence mining, it is therefore and has always been a ‘quick to market’ opportunity for the company.

Highlights at the Riley DSO Hematite Project include:

Venture’s Managing Director commented “The signing of the off-take agreement with a group of the calibre of Prosperity Steel, has strengthened the likelihood of the Riley Iron Ore Mine moving into production. Venture looks forward to delivering the first shipment to our new partners at a positive time in the iron ore price cycle. In addition, the Company will soon be delivering the outcomes from an updated Scoping Study on the higher-grade development scenario for the Mount Lindsay Tin-Tungsten Project.”