US sanctions: what trade restrictions on Iran mean for the upstream industry

The US today re-imposes economic sanctions on Iran, with a second wave of sanctions targeting the Islamic Republic's energy sector due in November. What impact will President Trump's hardline stance have on OPEC, existing upstream projects in the Persian Gulf, and oil and gas supply worldwide? 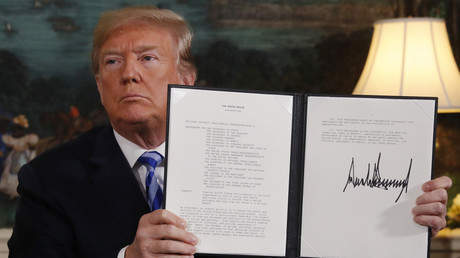 President Trump has made good on his pledge to re-impose tough economic sanctions on Iran.

In May, President Donald Trump ended US participation in the Obama-era nuclear agreement with Iran.

Under the 2015 Nuclear Deal Joint Comprehensive Plan of Action (JCPOA) with the P5+1 group of world powers – the US, UK, France, China, Russia and Germany – Iran agreed to limit its nuclear activities and allow in international inspectors in return for the lifting of economic sanctions.

President Trump described the JCPOA has “a horrible, one-sided deal” and pledged to re-impose tough sanctions on Tehran after a wind-down period of 90 days. That has now expired.

As of 7 August, Iran is, among other things, prohibited from using US currency, trading in metals and minerals including gold, steel, coal and aluminium, and conducting transactions related to the Iranian currency the rial, the value of which has already declined 50% against the US dollar in 2018 amidst civil unrest.

President Trump wants Iran to curtail its nuclear enrichment and weapons programmes, and end its support of unfavourable governments or uprisings in the Middle East.

Adopting a typically hardline stance, he has warned of “severe consequences” for any countries or companies that defy the sanctions and continue to do business with Iran.

What do sanctions mean for the oil and gas industry?

The remaining unilateral sanctions will be re-imposed by the US on 5 November and will target Iran’s energy sector, including barring imports of the oil and gas from the country, and sanctions on its energy, shipping and shipbuilding sectors.

French oil and gas multinational Total has already threatened to pull out of its $4.8bn deal with Petropars, a subsidiary of the National Iranian Oil Company (NIOC), to exploit the vast South Pars natural gas field in the Persian Gulf unless it is granted a waiver from the US sanctions.

“The Iranians will try and replace companies that withdraw from existing projects with other firms that are willing to bear the impact of sanctions – however, it will not always be easy or possible and there will inevitably be delays and problems upstream as a result.”

Gulf between US and Europe

Iran’s oil exports reportedly hit 2.7 million barrels per day (bpd) in May, a new record since the lifting of international sanctions on Tehran in 2016. The bulk of Iran’s crude exports, at least 1.8 million bpd, goes to Asia, most of the rest to Europe.

The EU has responded to the latest US sanctions by updating a ‘blocking statute’ aimed at protecting European companies from penalties imposed for doing business with, or in, Iran.

They will also be able to sue the US in EU member states for compensation.

However, such moves are unlikely to have much of an impact as the US appears determined to force its allies to choose between the huge US market and the relatively small Iranian one.

“Refiners and traders sometimes like to think that there might be waivers or that the US is ready to backtrack or reengage Iran in talks,” says Fabiani.

“The truth is that Washington is determined to reduce Iranian oil exports as closely as possible to zero. Few countries will be able to escape this – China, for example – and for this reason we should expect a sharp drop in oil exports from Iran starting from November.”

Falling exports from Iran, the third-largest oil exporter among the OPEC countries, also has the potential to expose the looming oil supply crunch.

With Iran’s oil down, OPEC member countries may struggle to increase production and spare capacity, forcing the global oil and gas market to adjust to a new reality.

“The lack of upstream investment and numerous supply disruptions across OPEC – in Libya, Venezuela and Nigeria, just to name a few – means that OPEC will struggle to raise production to compensate for all this without exhausting all its ammunition too soon.”