Tyranna Resources to acquire Goodsprings Cobalt and Base Metals Project

Tyranna Resources, an Australian diversified minerals exploration company, is set to take ownership of the Goodsprings Cobalt and Base Metals Project in the US state of Nevada through the 100% acquisition of its holding company US Cobalt. 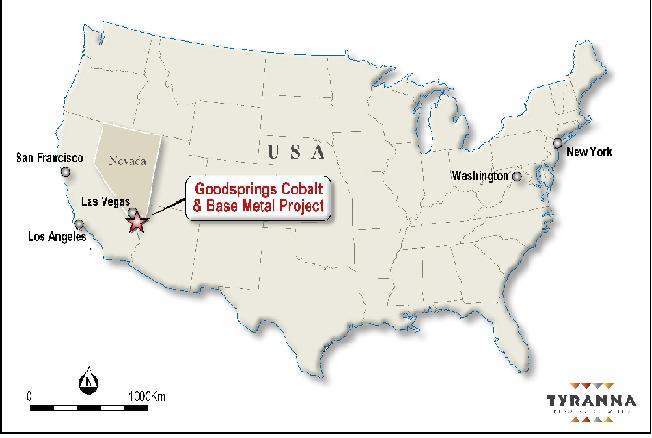 The two parties executed an agreement in this regard which follows a binding option agreement signed by them in late March.

Tyranna Resources said that the acquisition of US Cobalt is part of its diversification strategy aimed at exploiting the battery minerals revolution.

Located in the Goodsprings mining district in southern part of Nevada, the Goodsprings Cobalt and Base Metals Project is made up of 329 mining claims, that are spread over 6,580 acres.

Tyranna managing director Bruno Seneque said: “This is an outstanding deal for Tyranna and our shareholders which we have secured via a scrip issue. Historical mining results suggest that this area holds some of the highest grade Cobalt mines that can be found in the district.

“In the 1920’s the mines in this area produced approximately 20 tonnes of Cobalt rich ore from copper mining and historical grades were reported between 6% and 29%1 . No modern mining techniques have been used here and we are confident that good exploration and mining methods will handsomely reward the Company here at Goodsprings.”

The acquisition will be subject to approval of shareholders of Tyranna Resources.

Earlier this month, Tyranna Resources wrapped up its acquisition of the Eureka Gold Project in Western Australia from Central Iron Ore. The Australian gold project is located 50km north of the gold mining centre of Kalgoorlie.

Tyranna Resources said that it will begin drilling at the Eureka Gold Project in mid-September. The company has given a drilling contract in this regard to JORC Drilling.

Apart from the Eureka Gold Project, Tyranna Resources’ portfolio includes the Jumbuck Gold project and the Wilcherry Project, both located in Australia along with stakes in Kairos Minerals and Orinoco Gold companies.