The TurkStream gas pipeline is made up of two strings of 930km-long offshore pipelines, which transport up to 31.5 billion cubic meters of gas annually from Russian gas reserves 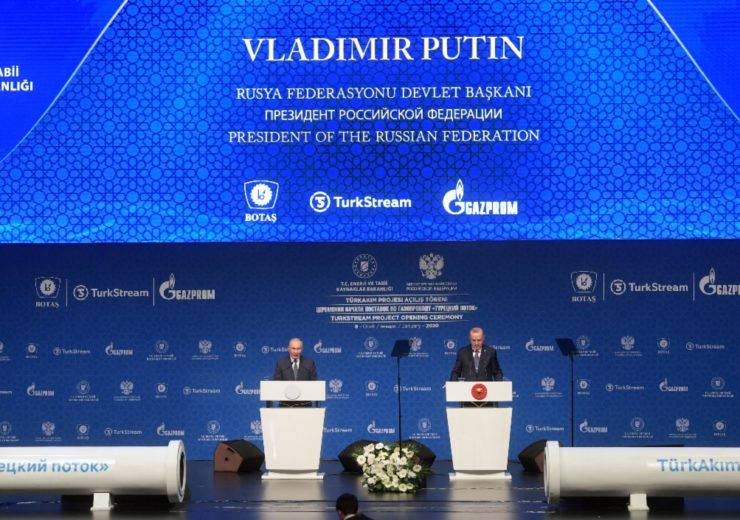 Russia and Turkey have officially launched the TurkStream gas pipeline, a two-string export natural gas pipeline laid between the two countries through the Black Sea.

The opening ceremony of the pipeline project was attended by Russian President Vladimir Putin, Turkish President Recep Tayyip Erdogan, and other dignitaries.

The export gas pipeline project, which has been developed by Gazprom and Botaş Petroleum Pipeline, connects the gas transmission systems of Russia and Turkey.

The pipeline project is made up of two strings of 930km-long pipelines. Each of the strings is capable of transporting up to 15.75 billion cubic meters of gas annually from Russian gas reserves.

TurkStream’s first string will transport gas to Turkey, while the second string will deliver the Russian gas to southern and southeastern Europe via Turkish territory.

According to Gazprom, the pipelaying of the TurkStream gas pipeline took 15 months and was wrapped up in November 2018 using the Pioneering Spirit vessel owned by Allseas Group. The company’s subsidiary South Stream Transport was responsible for constructing the offshore portion of the gas pipeline project.

Construction of the receiving terminal near the Turkish town of Kiyikoy was wrapped up in late 2019.

The starting point for sending gas into the TurkStream gas pipeline is the Russkaya compressor station built near the Russian town Anapa, which is located on the northern coast of the Black Sea.

The 224MW Russkaya compressor station, which is part of Russia’s Unified Gas Supply System, maintains the pressure needed for transmitting gas along the two strings of TurkStream until it reaches the Kiyikoy receiving terminal.

The TurkStream gas pipeline is the third pipeline that supplies gas from Russia to Turkey with the other two being the Blue Stream and Trans-Balkan gas pipelines.