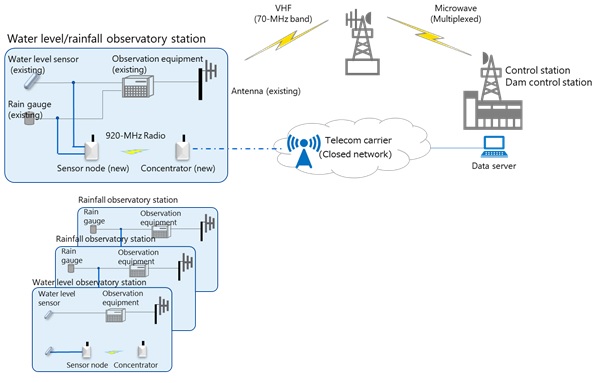 LPIS has started operations in four water level and rainfall observatory stations located in the Kii Peninsula in western Japan.

The system is compact, enables easy installations and handling, and allows reliable transmission of data without much interference from meteorological conditions.

Previously, Toshiba ESS has adopted LPWA technology to use in the field experiments for demonstrating the viability of a river and stream water level monitoring system in Hokkaido.

The firm said that the concentrators are equipped with lightning surge protectors and an uninterruptible power supply (UPS).

Additionally, the sensor nodes will be operated using dry cell batteries and allows the operations to be uninterrupted during frequent power outages on site.

Furthermore, the data collected in the concentrators will be transmitted to J-Power servers in the Kii Peninsula in western Japan through an LTE cellular network.

Toshiba ESS DX Business Design Project Team project manager Yasutaka Arai said: “We are confident that this new digital solution can be applied across many sectors, including the energy and industrial sectors.

“Toshiba ESS is striving to become one of the world’s leading CPS*5 technology companies, and beginning with the LPIS, we will be continuing to provide various other IoT services.”

The Fuchu operations, which is operated by Toshiba ESS has manufactured the sensor nodes and concentrators which are utilised in the project.