Titan to construct liquefied bio-methane plant in Port of Amsterdam

The facility claimed to be the world’s largest bio-methane liquefaction plant will have the capacity to produce 200,000 tonnes of LBM per annum 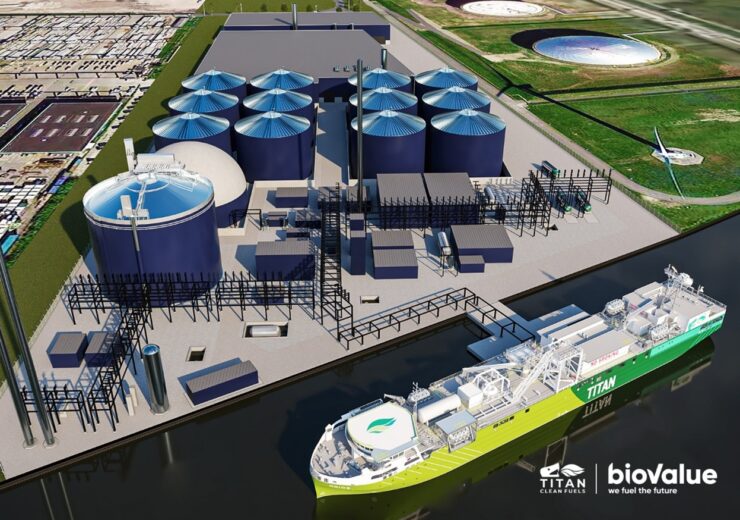 The plant will have the capacity to produce 200,000 tonnes of LBM per annum. (Credit: Titan LNG)

Low and zero-carbon fuels supplier Titan has announced that it will construct and operate the liquefied bio-methane (LBM) plant at its strategic location in the Port of Amsterdam, enabling supply to ships and trucks.

The facility claimed to be the world’s largest bio-methane liquefaction plant will have the capacity to produce 200,000 tonnes of LBM per annum.

Titan has inked contracts with biogas producer BioValue for the exclusive off-take of all on-site produced biogas, and Linde Engineering to perform basic engineering works.

Under the contract, BioValue will supply a major portion of the biogas needed for the total production of LBM.

The company will build a new biogas plant next to the LBM plant. The rest of the biogas will be procured from other production installations throughout Europe that are connected to the existing gas grid.

Linde Engineering has been chosen by Titan to provide engineering works based on the company’s liquefaction technology.

Titan stated that the majority of the LBM volumes produced by the plant will be supplied to the LBM-powered vessels of the company’s launching customer.

The remaining volumes will be supplied to truck refuelling stations and industrial customers.

The LBM will replace fossil fuels, eliminating about a million tonnes of CO2 equivalent emissions per annum, equal to the emissions of around 25% of all diesel cars in the Netherlands each year, said Titan.

The project is in line with EU regulations such as outlined in the Fit-For-55 package and the recently published RePowerEU plans.

The LBM plant will be located next to Titan’s berth in the Port of Amsterdam, from which the land will be leased. The plant is expected to produce its first LBM in 2025.

Titan CTO Ronald van Selm said: “Titan is committed to decarbonising shipping by supplying LBM and any other renewable fuels such as hydrogen-derived methane, also known as E-LNG.

“T Strategic value chain collaborations are paramount to ramping up alternative fuel production to the scale required for shipping. We are proud of the joint efforts with BioValue and look forward to a long-lasting partnership.”

BioValue CEO Ids Schaap said: “BioValue is a pioneering biogas producer with six production sites in the Netherlands. With our engagement in this exciting LBM project, we are able to climb the circularity ladder to on-site production of advanced biofuels.”

Titan to construct liquefied bio-methane plant in Port of Amsterdam