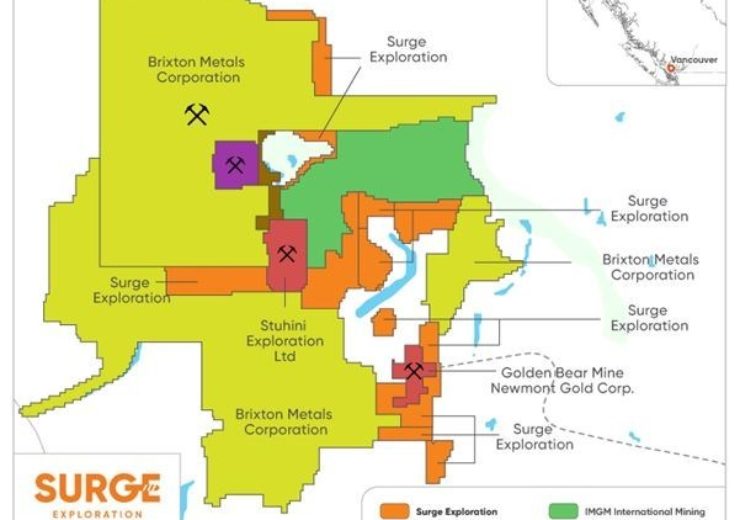 It should be noted that results from nearby and/or adjacent properties are not necessarily indicative or reflective of mineralization that may be hosted on the Company’s property.

Subject to the terms and conditions of the resultant Purchase and Sale Agreement dated September 5, 2019, for the new mineral claims, Surge agrees to make a cash payment to the vendor in the amount of $17,400 and issuing 500,000 fully paid and non-assessable common shares in the capital of the Company. The transaction is subject to TSX Venture Exchange (“Exchange”) approval.

All shares issued are subject to a four month and a day hold period in accordance with applicable securities laws.

The mineral claims owned by Surge is also partly adjoining the Thorn Project currently owned by Brixton Metals Corp. (“Brixton”) (BBB: TSXV) located in the Sutlahine River area of northwestern British Columbia (northern tip of the “Golden Triangle”). At the Thorn Project, Brixton reported on July 15, 2019 a new drill hole intercept of 1.97 grams per tonne gold equivalent across 554.70 meters including 135.96M of 1.35 g/t Au, 0.31% Cu, 133.62 g/t Ag or 5.00 g/t Au including 6M of 3.56% Cu, 3.37 g/t Au, 257.77 g/t Ag. Again, results from nearby and/or adjacent properties are not necessarily indicative or reflective of mineralization that may be hosted on the Company’s property.

Surges’ land acquisition complements its previously announced 220 sq. km mineral claim staking program Golden Triangle, reiterating the Company’s commitment to region. These new claims have been acquired to provide additional exploration potential within BC’s Golden Triangle, a regionally important geological and structural trend in Canada. A large portion of the new property is adjoining both the Thorn Project and the boundaries of the Golden Bear Mine.

In Brixton’s news release dated Aug 27, 2019 (Brixton News Release) they reported that they have commenced a phase two exploration program at its Thorn Project consisting of approximately 7,000 to 10,000 metres of HQ and NQ size core drilling with two drills on 2 distinct porphyry targets within the Camp Creek Copper Corridor and the Chivas zone. In this news release, Brixton also confirmed that it has recently staked an additional 862 square kilometres of new mineral claims adjoining the Surge Exploration Mineral Claims for a new total mineral claim area of 1,858 square kilometres of wholly owned tenure in the area.