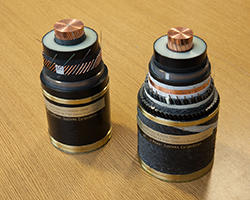 The first project involved construction of a 400kV HVDC XLPE environment friendly cable system, which is claimed to be the highest voltage in the world for an HVDC-XLPE cable system, for NEMO Link.

The 1GW Nemo Link interconnector, a joint venture between National Grid in the UK and ELIA in Belgium, connects the electricity systems of the UK and Belgium via subsea cables.

In addition to increasing security of power supply for both countries, the new interconnection allows the import and export of electricity while supporting the integration of renewable energy in the grid.

Sumitomo said in a statement: “The cable system also features a high allowable operating temperature, which allows Nemo Link to have extra safety margin during cable operation, especially in cases where an unforeseeable situation creates excess current flows in the cable system or excess cable burial depth occurs due to sand wave mobility on the seabed.”

Following commercial operation in March 2019, the project increased the total transmission capacity between Hokkaido and Honshu from 600MW to 900MW.